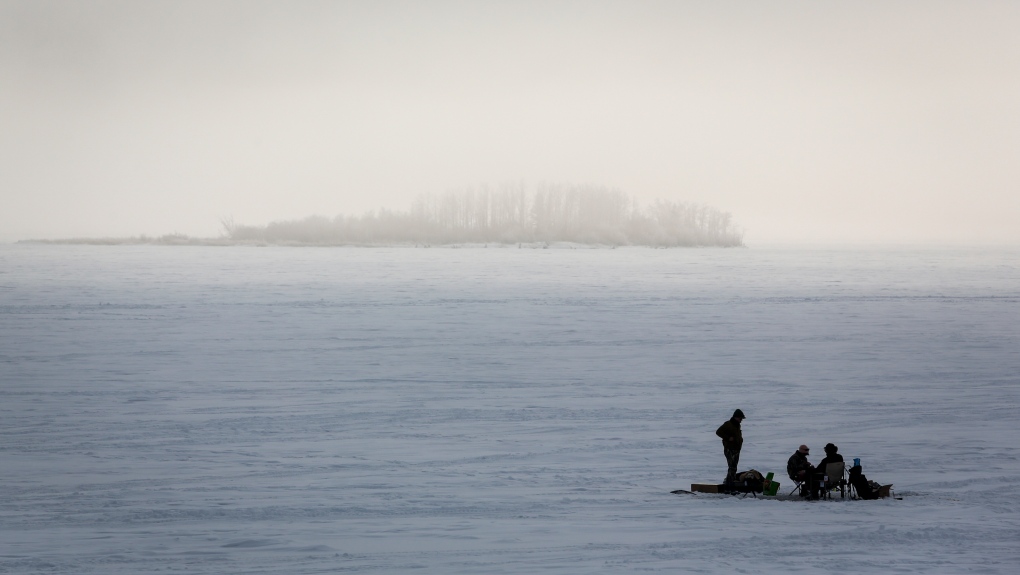 In this file photo, ice fishermen huddle over a hole in the ice on Ghost Lake Reservoir near Cochrane, Alta., Sunday, Dec. 27, 2020, amid a worldwide COVID-19 pandemic. THE CANADIAN PRESS/Jeff McIntosh

TORONTO -- Within this century, nearly 5,700 lakes in the Northern Hemisphere could permanently lose ice cover in winters due to global warming -- including parts of the Great Lakes, according to new research out of York University.

Current greenhouse-gas emissions mean that 179 lakes will also lose this ice cover in the next decade alone, the analysis shows. The loss of ice cover means a decrease in the quality and quantity of the water in these lakes, many of which are near large metropolitan areas and are important sources of drinking water.

“There’s a lot of human impacts that really extend when we have loss of ice that go well beyond just the ecological effects,” Alessandro Filazzola, one of the study authors and postdoctoral fellow at York, said in a video on the research.

The research is explained in a paper published in December in the journal Geophysical Research Letters.

According to a press release put out Wednesday, parts of Lake Superior and Lake Michigan could permanently become ice-free by 2055 if greenhouse-gas emissions continue to be high.

“It is quite dramatic for some of these lakes, that froze often, but within a few decades they stop freezing indefinitely,” says Filazzola in the release. “It’s pretty shocking to imagine a lake that would normally freeze no longer doing so.”

In one dramatic situation, a lake that has been monitored for around 600 years, Lake Suwa in Japan, could permanently lose ice cover “within this generation,” according to the research.

This research presents the first time someone has attempted to estimate the number of lakes facing a permanent loss of winter ice in the relatively near future, researchers claim.

It might not sound like a serious problem at first — of course not every lake freezes over every winter.

But because ice is used in refrigeration and recreation, we have long historical records going back for many lakes which show how often they have frozen over in the past. These help us understand the usual patterns this process follows — and what is out of the ordinary.

For instance, in Germany, priests have celebrated Lake Constance freezing since 875 C.E., and have taken meticulous records of the timing of it. Although it didn’t freeze every year, the very last time it froze was in 1963, “in stark contrast to historical patterns,” according to the new paper.

To forecast how greenhouse gas emissions could affect more lakes in the future, researchers looked at 31 specific lakes that only had intermittent ice cover this year, examining long-term records listing which years the lakes had frozen over or not. The data extended from 41 to 1,146 years back, depending on the lake.

The physical characteristics of these lakes were taken into account as well, such as how deep they were, their surface area, their latitude and longitude, in order to create a picture of the characteristics associated with ice loss.

Researchers then consulted the HydroLAKES dataset and found more than 51,000 lakes in the Northern Hemisphere that had similar physical characteristics to the 31 lakes that were studied in detail, in order to extrapolate to a larger number of lakes.

“These lakes range all across the globe, we got some in Japan, Europe, North America,” Filazzola said in the video.

They came up with the 5,700 estimate by comparing these lakes to winter temperature forecasts from 2020 to 2098 under 12 climate change scenarios.

What makes a lake freeze in the winter is largely the size of the lake and the temperature of the air around the water, researchers say.

Most lakes did not freeze when the average temperature in the winter was above -0.9 degrees Celsius, researchers found. If the lake was deeper and larger, it needed colder temperatures to freeze. These lakes could go as cold as -4.8 degrees Celsius without freezing.

As greenhouse-gas emissions slowly cause the warming of the planet, less and less of these lakes will get cold enough in winter to freeze over, researchers pointed out.

“With increased greenhouse gas emissions, we expect greater increases in winter air temperatures, which are expected to increase much more than summer temperatures in the Northern Hemisphere,” says Filazzola. “It’s this warming of a couple of degrees, as [a] result of carbon emissions, that will cause the loss of lake ice into the future.”

But although researchers anticipated that the planet’s current warming trends would cause permanent ice cover loss, the results were still a shock to the system.

Sapna Sharma, an associate professor and lead author of the study, said in the release that we need to be doing more to slow greenhouse-gas emissions if we want to protect ice cover.

“I was surprised at how quickly we may see this transition to permanent loss of ice cover in lakes that had previously frozen near consistently for centuries,” she said.

The paper noted that outside of the 179 lakes predicted to lose ice cover permanently in the next decade, “no further lakes were forecasted to permanently lose ice cover within this century if GHG emissions are severely mitigated.”

However, since this also required carbon dioxide levels to start declining by 2020, researchers noted this is “considered highly unlikely.”

The areas projected to be the most affected were coastal or southern regions of the Northern Hemisphere.

“Coincidentally, the most vulnerable lakes to permanently lose ice cover within this century are also found in close proximity to large human populations and are amongst some of the deepest and largest lakes of the world,” the paper stated.

Sharma said in a video that ice cover for lakes is “extremely important, both ecologically and socio-economically.”

The Great Lakes alone represent around 21 per cent of the world’s supply of surface fresh water, according to the United States Environmental Protection Agency.

The paper notes that millions of people live in areas where a lake freezing over is a critical part of their economy and transportation, as well as their cultural way of life.

The winter recreation economy itself is also a multi-billion dollar industry in southern and coastal regions, and could collapse without lake ice.

Losing the protection of the ice cover in the winter also leads to warmer waters in the summer, and increased rates of algal blooms, some of which can be toxic and harm the biodiversity of the lake itself.

Both Filazola and Sharma noted that water quality itself is also affected by a loss of ice cover.

“If we want to have good quality drinking water, we might want to be concerned about loss of lake ice,” Filazzola said.