Massive ancient drawing of cat discovered on hill in Peru 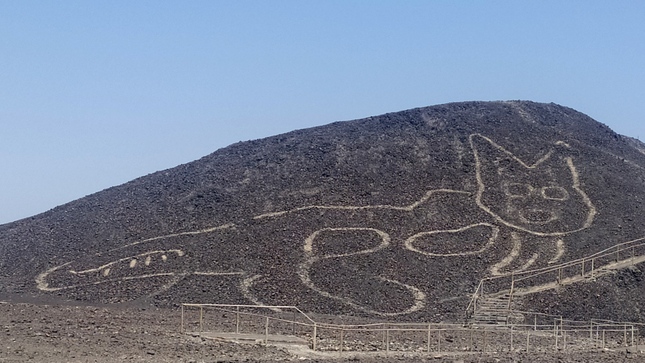 This image shows the newly discovered geoglyph in Peru, amidst the famous Nazca Lines. (Peru Communication and Image Office / Ministry of Culture)

TORONTO -- An enormous drawing of a cat, etched into the side of a hill thousands of years ago, has been uncovered in Peru, adding another image to the country’s catalogue of mystifying geoglyphs.

Peru is home to the Nazca Lines, a series of drawings scratched into the surface of an arid coastal plain between 500 BCE and 500 CE which are on such a massive scale that one can only see the full pictures with an aerial view.

The geometric drawings depict animals, plants and more fantastical images, and were declared a UNESCO World Heritage Site in 1994.

The new geoglyph was discovered during remodelling of the Natural Viewpoint, which visitors usually climb in order to be able to see some of the geoglyphs from a high enough vantage point.

The hill itself is home to a massive drawing of a feline figure, 37 metres long, according to a press release this week from Peru’s Ministry of Culture.

“The figure was barely visible and was about to disappear due to its location on a fairly steep slope and the effects of natural erosion,” the release stated.

The cat, which is depicted in a looser, rounder style than some of the more geometric drawings that make up the Nazca Lines, is seen horizontally, with a straight tail and three round shapes making up its facial features.

Officials theorize that the drawing actually predates the more famous geoglyphs and is instead from the Late Paracas period, which refers to a Pre-Colombian Andean society that occupied what is now known as the Ica Region of Peru between 800 BCE and 100 BCE.

Artifacts and textiles from the Paracas society frequently have images of felines on them, according to the release.

“Even in times of pandemic, personnel from the Ministry of Culture have been contributing to research, conservation and tourism development in the region, particularly in the Nasca province,” the release stated.