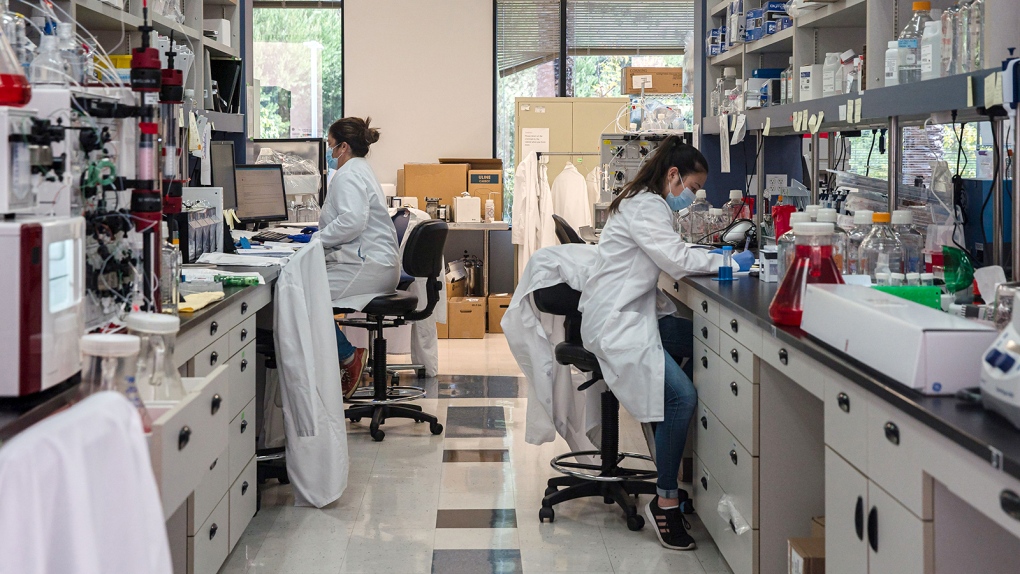 Research has suggested female scientists are publishing less than their male counterparts, and that matters for fighting coronavirus and other diseases. (Ariana Drehsler/AFP/Getty Images)

Many diseases, including COVID-19, can attack men and women in different ways. Why this is depends on a complex mix of biology and behaviour that can be difficult to untangle.

But we do know that these differences are more likely to be considered if medical research involves female scientists, which makes the current state of scientific endeavoUr on COVID-19, where women are more underrepresented as authors than ever, all the more worrying.

The numbers are clear: Some 1,370 papers have been published in medical journals about COVID-19 involving 6,722 authors but only 34% of these were female, according to research published last week by Ana-Catarina Pinho-Gomes, a researcher at The George Institute for Global Health at the University of Oxford.

It's a problem that goes beyond gender equity and fairness. It could impact how we understand the coronavirus itself, said Pinho-Gomes.

"Women's voices are being heard less in the scientific response to the pandemic," she said.

The numbers skew a playing field that wasn't level before the pandemic. And it's not just female scientists underrepresented — even the lab rats are likely to be male.

Pinho-Gomes' research, which published in the BMJ Global Health journal, also looked at the percentage of women named as first and last authors. That may seem like an arcane distinction to people outside of academia, but it's pivotal when it comes to career progression.

Many scientists are typically credited as authors in scientific studies, but the first author is usually responsible for the bulk of the work while the last author is typically a more senior figure who acts as supervisor.

They found 29% of first authors and 26% of last authors were female.

While the underrepresentation of female authors in research has long been a problem, these figures have suggested that things have gotten worse for female scientists during the pandemic.

They highlighted a 2017 study of 1.5 million research papers, in which women comprised 40% of first authors and 27% of last authors — a higher share than they found on COVID-related papers.

While this latest research didn't examine exactly why female researchers were publishing less during the pandemic, they suggested additional caring, parenting and homeschooling responsibilities falling to women could be exacerbating an existing male bias.

The repercussions of this gender bias are far greater than the career prospects of individual scientists.

Women's participation in research is linked with a greater likelihood of reporting data broken down by gender and sex — something that can improve our understanding of diseases, particularly given that COVID-19 has affected men far more adversely than women.

Gender differences may mean that men have different attitudes or behaviors such as smoking and drinking more, washing their hands less frequently and a tendency to delay seeking medical attention that affects how a disease affects them.

And when it comes to biological sex differences in immunity, we still know very little, said Adam Moeser, an associate professor of large animal clinical sciences at Michigan State University. This goes back to basic lab research, usually on mice, where females are equally underrepresented.

Male mice have been favored, he said, because of an assumption that female animals produce more variable results, potentially due to changes in sex hormones. This means that drugs and compounds that eventually advance to clinical trials in humans are based on studies in male animals.

"It is known that there are significant differences in the biology of the sexes and thus responses to same investigative drugs could be very different between a male animal vs a female animal," Moeser said via email.

"It is possible that compounds that failed to make it to the market due to failure of efficacy in the preclinical animals research stages, could have been effective therapies in women, or vice versa," Moeser said.

This disparity in research has only recently begun to be addressed, with the National Institutes of Health in the United States, since 2015, requiring that sex difference data be collected to qualify for a new preclinical research grants. However, Moeser said many publications are still largely reporting results from one sex.

It's not only in the medical field that's seen a smaller share of academic papers authored by women. Female economists are not submitting new COVID-related research at the same pace as their male counterparts, research from the University of Cambridge has suggested.

The researchers of that study suggested it was because female academics were more risk averse and less willing, as well as less able as a result of extra domestic work, to start new projects at short notice.

Megan Frederickson, an associate professor at the department of ecology and evolutionary biology at the University of Toronto, said she'd struggled to get what she needed done with her 6-year-old at home since mid-March (and likely off school until September). She said she was meant to send several chapters of her book to her publisher.

"I've not made progress on that," Frederickson said. "It's definitely going to have to be delayed."

"As academics we live in a publish-or-perish world. It could be harmful for our career progressions," she told CNN.

Ruth Webster, an associate professor in the faculty of medicine at the University of New South Wales in Sydney, Australia, and mother of two children age 9 and 11, agreed that she'd been less productive during lockdown.

"My mindspace wasn't there for the deep work."

She said that fewer first and last author credits now would affect promotions and grant and fellowship applications down the track. There was also pressure to make your research area relevant to the coronavirus, with research funding and focus being diverted to COVID-19.

"I've got to ride this wave, or I am going to be left behind. The academic treadmill keeps going and no one will give you a guarantee that if you back off it won't make a difference."

While COVID-19 has hit men harder as an illness, the long-term economic and societal consequences of the pandemic could fall more heavily on women's shoulders, Pinho-Gomes believed. Either way, it's crucial to look at COVID-19 through a gender lens — whether it's in the lab, hospital or elsewhere.

Not all governments are publicly releasing data broken down by sex, Webster in Australia noted.

Out of 115 countries included in a tracker compiled by the Global Health 50/50 initiative at University College London, only 47 countries are reporting data on COVID deaths and confirmed cases by sex, with only 10 giving sex-disaggregated data on hospitalizations and ICU admissions.

Having data on cases and deaths, and other markers like ICU admission, is really important as it helps understand who is getting infected and, once infected, whether men and women are at different risk of developing severe illness or dying.

If you don't have this kind of data then it could be more difficult to target your COVID-19 treatment strategies and therapies to those who will benefit most, Webster said.

"Men are more likely to die of COVID-19 so maybe if it's that women are more protected, then perhaps you don't put them on a ventilator for example," she said. "If you keep treating people all the same without looking for these differences then you might cause harm where you didn't need to."