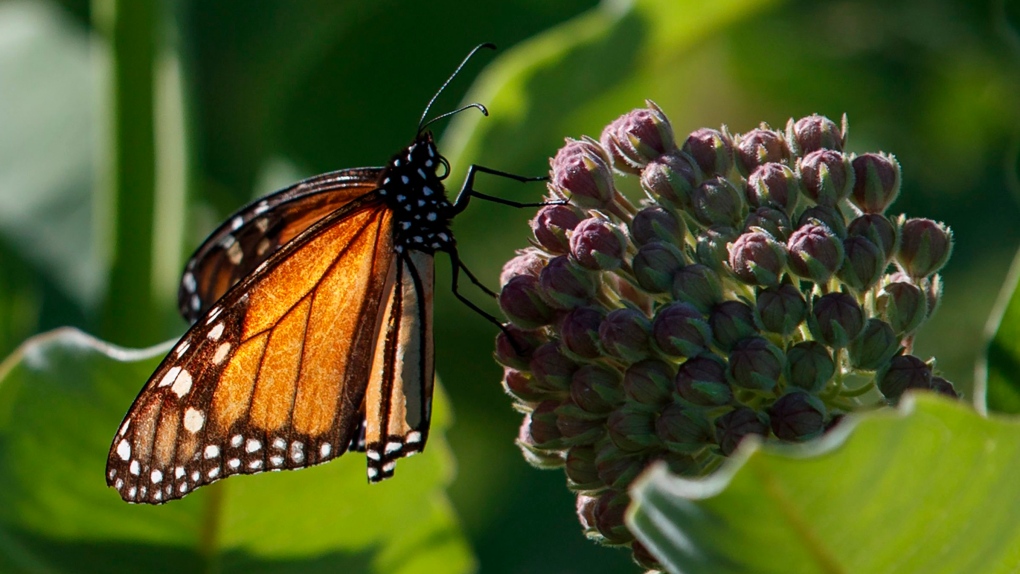 A monarch butterfly perches on milkweed at the Patuxent Wildlife Research Center in Laurel, Md., Friday, May 31, 2019. The best time to cut down milkweed plants in southern Ontario, the place where monarchs are found most in Canada, is mid-July, a new study say. (AP Photo/Carolyn Kaster)

A new study from researchers at the University of Guelph says that cutting down milkweed -- a plant crucial as both nursery and food to the monarch butterfly -- could actually be beneficial to the insect as long as it’s done at the right time of year.

Monarch butterflies will only lay their eggs on milkweed, and the plant serves as food to the new larvae as they grow, making milkweed uniquely necessary to the survival of the monarch.

Researchers for the study, which was published in the journal Global Ecology and Conservation, compared how many monarch eggs were laid depending on which week of the summer the milkweed had been cut down. The study found that trimming a plot of milkweed generated more eggs than if the milkweed had been left untouched all summer.

The best time to cut milkweed in southern Ontario is during the second and third weeks of July, according to the study.

Prof. Ryan Norris, from U of G’s Department of Integrative Biology, told CTVNews.ca in a phone interview that “the general idea is if you cut in mid-July, that should maximize the number of eggs we see.”

The peak of the monarch butterfly egg-laying season is in early to mid-August, Norris explained, and monarchs prefer to lay their eggs on young milkweed plants.

“The butterflies probably see younger milkweed as higher quality and potentially more nutrient-dense for their caterpillars that will emerge from these eggs,” said Samantha Knight, the study’s lead author in a press release.

This means that if the milkweed is cut during the second or third week of July in southern Ontario, the milkweed will have rebounded with fresh growth attractive to the butterflies just as they are laying the most eggs.

The monarch butterfly, with its bright orange and black wings, has long been a symbol of summer, and an important pollinator. They are “sentinels” of the natural world, Norris said, even for those who rarely venture into the wild.

But the monarch’s numbers have been on the decline for years, leading it to be classified as a “special concern,” under the Ontario Endangered Species Act. The number of milkweed plants in southern Ontario has dropped nearly by half since the 1990s.

So if cutting can help, is there a bad time to chop down your milkweed?

Norris says that getting out the weed whacker now would be a mistake, as the milkweed would likely be full of fragile butterfly eggs and larvae at this time of year.

“Late summer, or early fall would be a poor time to do it,” he said. “Cause what you’re really doing is you’re mowing down the milkweed that contains the last generation of monarchs … that would’ve otherwise been migrating south to Mexico.”

It’s also recommended to not trim an entire plot of milkweed at once. Instead he suggests leaving a few stalks standing just in case there are some butterflies hovering around ready to lay their eggs.

This new research was conducted on a roadside near Sarnia in rural southern Ontario.

Cutting milkweed to stimulate monarch numbers has been studied before, according to Norris, but the “optimal time (to cut milkweed) will always change depending on where you are, particularly what latitude you’re at.

Milkweed growing along the side of a highway or near hydro poles is often cut down, and Norris said this was “part of the motivation” to do the research there and to help provide a guideline for what time it would be most beneficial to chop it down.

“There are already several counties in the U.S. that try to cut at their optimal time, or what they think is the optimal times, for either monarchs or pollinators,” Norris said.