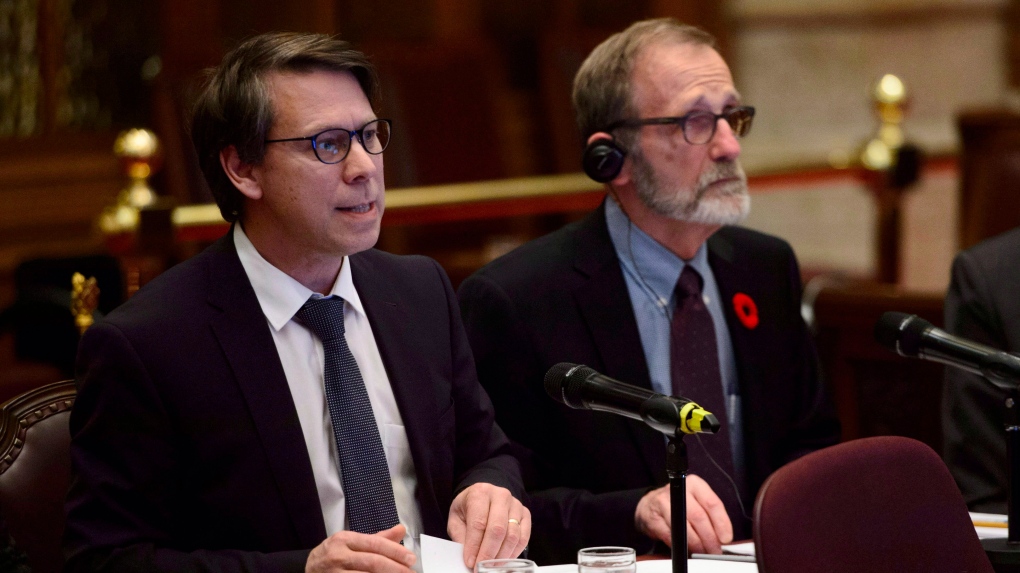 Stephane Perrault, (left) Chief Electoral Officer of Canada, and Yves Cote, Commissioner of Canada Elections, appear as witness for a Committee of the Whole regarding Bill C-76 (Elections Modernization Act) in the Senate on Parliament Hill in Ottawa on Tuesday, Nov. 6, 2018.THE CANADIAN PRESS/Sean Kilpatrick

OTTAWA -- Canada’s Chief Electoral Officer has issued a reminder that the activities of provincial governments are not subject to restrictions under federal election law, in light of controversy over Ontario Premier Doug Ford’s gas-pump sticker campaign.

“The Elections Act does not govern the activities of provincial governments as it relates to federal-provincial issues,” said Elections Canada head Stephane Perrault in an interview on Wednesday with CTVNews.ca

This reminder came in response to Ontario MPP Taras Natyshak’s letter to Perrault about Ford’s plan to mandate gas stations to put government-issued stickers about the federal carbon tax on each of their pumps, or face heavy fines.

In the letter, sent two weeks ago, Natyshak raised questions about whether the PC government’s stickers would be in violation of the Canada Elections Act rules on advertising because the stickers are about an issue -- the carbon tax -- that will likely be a topic that arises in the upcoming campaign, should they be placed on pumps by the time the campaign is launched.

The stickers are blue, and include a message about how the federally imposed carbon tax is adding 4.4 cents per litre to the price of gas this year, going up to $11.1 cents in 2022. They do not mention the federal rebate program in place to reimburse Canadians in the four provinces where the federal plan has been implemented.

Perrault said the federal position over decades has been that the third-party regime -- which applies to any person or group that is not a registered political party that conducts partisan activities during a federal election campaign -- does not apply to provincial government advertising campaigns. Though, each province does have its own restrictions on the types of advertising they are able to engage in using public funds.

Under federal elections law, third parties have to register with Elections Canada, report their contributions and are subject to spending restrictions.

According to The Canadian Press, Federal Environment and Climate Change Minister Catherine McKenna has called the stickers “government propaganda,” and “a new low for our political discourse.”

The fact that provincial ad campaigns are exempt may pose an interesting dilemma in the upcoming federal campaign, given the growing alliance of conservative premiers who are pushing back against Trudeau, mainly over the federal carbon tax. These include Ford, newly sworn-in UCP Alberta Premier Jason Kenney, Saskatchewan Premier Scott Moe, Manitoba Premier Brian Pallister, and New Brunswick Premier Blaine Higgs.

Kenney recently said in an interview on CTV’s Question Period that he will be doing whatever he can to ensure that a federal Conservative government is elected in the fall. Much of his provincial campaign was spent attacking Trudeau and vowing to fight the federal government on a bouquet of matters.

“I make no apologies for that,” Kenney said.

Should a premier want to take on individually campaigning or pushing out election advertisements, they would have to register as a third party. Though, if the messaging is coming through government-funded means, they don’t.

Perrault said that should a future Parliament want to look into this aspect of the law, they’d have to consider how subjecting provinces’ activities -- like surveying people -- to rules similar to those that any third party face, could pose a significant constraint on what they are able to do during federal elections.

“If that’s a route Parliament wants to take, that’s a policy debate that needs to happen… but that has not been the case,” said Perrault, adding that it would have to happen after this election, and likely following a considerable public debate given it is a “quite difficult issue.”

“I’m not going to shift interpretations just in the lead up to an election without any Parliamentary or juridical guidance to do that,” Perrault said.

The federal Liberals have made a wide array of changes to Canada's elections laws through Bill C-76 that Perrault’s office and other elections stakeholders are already in the process of implementing.

The changes that will be in place for the 2019 campaign as a result of this legislation include: new political party spending limits; new reporting measures for third parties conducting partisan work; and multiple changes aimed at eliminating foreign interference, including prohibiting organizations selling advertising from knowingly accepting elections ads from foreign actors.

The bill also requires platforms like Twitter, Google and Facebook to create a registry of all digital advertising published and paid for by third parties and political parties, as well as nominated and prospective candidates during the pre-writ and writ periods. The intent of these measures is stopping foreign actors or unknown entities from running ads that could influence the campaign.

In an emailed statement to CTVNews.ca on Thursday, Natyshak confirmed that he had received a response from Elections Canada. He said that “the drafters of our federal election laws likely didn’t foresee a provincial government going out of its way to promote a partisan agenda as Doug Ford is doing.”

He is now looking into ways to remedy what he views as a serious issue, through provincial law. He has introduced a private member’s bill that intends to restore a ban on partisan advertising provincially.