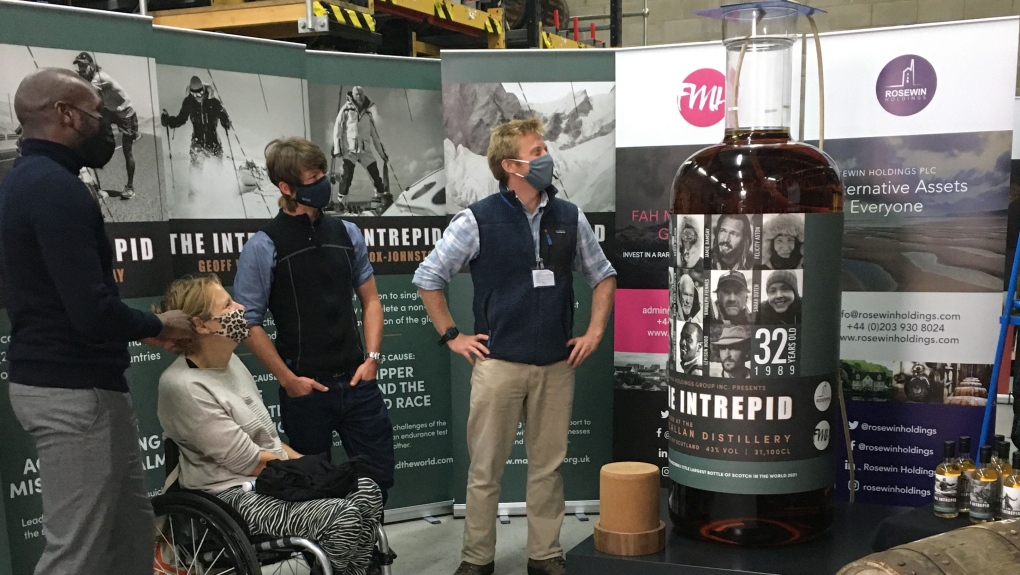 The world's largest bottle of whisky, called "The Intrepid," has sold for about US$1.4 million, according to the auction house Lyon and Turnbull.

The liquor is a 1989 Macallan single malt that spent 32 years maturing in oak casks at Macallan's Scotland distillery before being bottled in 2021. It is pale gold and has a sweet taste with notes of apple, says the auction house.

It was sold Wednesday to an international collector, according to Lyon and Turnbull.

The Intrepid project was created as a collaboration between Fah Mai, a Thailand-based investment company, and Rosewin Holdings, a London-based firm, which invest in whisky and other spirits.

The project's founder, Daniel Monk, was inspired by his father's "passion for adventure, exploration," says the auction house. The label on the bottle features 11 explorers, including Ranulph Fiennes and Robin Knox-Johnston.

The huge bottle is not the most expensive container of whisky ever sold. That honour goes to a 60-year old Macallan sold for $1.53 million in 2018.

The remaining businesses on Shelbourne Street in Saanich, B.C., that had been closed after last week's shooting at a Bank of Montreal branch have now reopened, police say.

Slovyansk could become the next major target in Moscow's campaign to take the Donbas region, Ukraine's predominantly Russian-speaking industrial heartland.

Thousands of residents in Sydney suburbs were told to evacuate their homes on Sunday after heavy rains caused floodwaters to rise and rivers to overflow in what authorities called life-threatening emergencies.

Parts of a mountain glacier collapsed in the Italian Alps on Sunday amid record temperatures, local authorities said, killing at least six people and injuring eight.