Scary Christmas: A look at the world's most unusual, creepy and odd holiday traditions 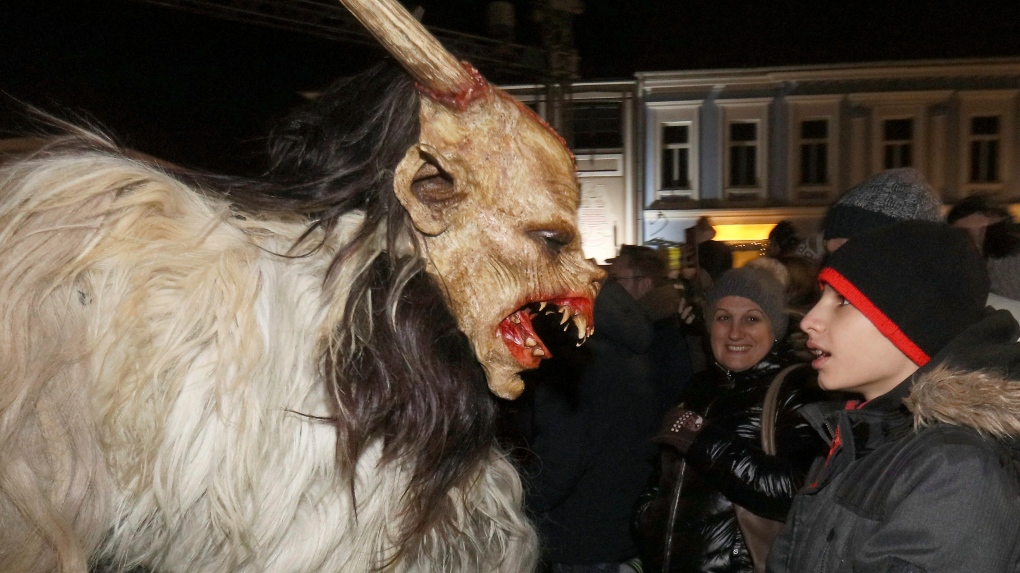 A Krampus scares spectators during a traditional Krampus run in which men and women dress up as pagan Krampus figures to scare people in Hollabrunn, Austria, Saturday, Nov. 30, 2019. (AP Photo/Ronald Zak)

TORONTO -- Not every culture features the iconic jolly St. Nicholas or Santa Claus in its Christmas tales, and most countries have different takes on the holiday season and it’s respective traditions.

Here are some of the odd, unusual and sometimes downright creepy holiday figures and practices from around the world. 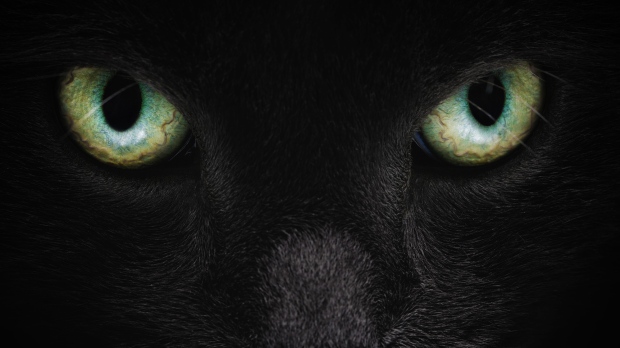 A close up of a cats face. Credit: GCapture / iStock

The Yule Cat, or Jolakotturinn, stems from a traditional legend where a monstrous, prowling cat devours anyone who has not received new clothes as a gift by the time Christmas arrives. Naughty children who did not do their chores, and in turn earn new clothes, would have to face the Yule Cat when it turned up Christmas Eve and ate their dinner – and then the child. 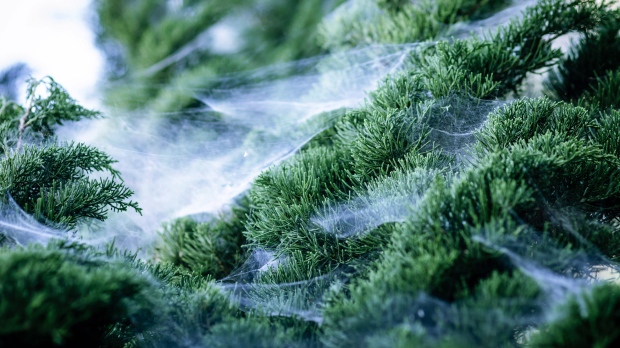 Thought to stem from a folk story out of Ukraine, many eastern Europeans will put spider-web ornaments on their Christmas tree. A spider in your Christmas tree is also thought to bring good luck. According to the folk story, an impoverished widow and her children tended to a tree all year in the hope that they could decorate it around Christmas time. Unfortunately, they could not afford to – and the spiders heard the widow’s children cry themselves to sleep on Christmas Eve. The spiders spent all night weaving their webs on the Christmas tree and when the morning sunlight hit the webs, they turned to silver and gold – and the widow and her children were never poor again. 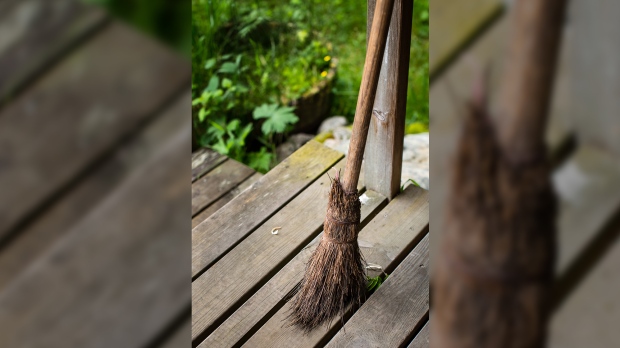 A traditional broomstick rests on a porch. Credit: KariHoglund / iStock

Norwegians believe that Christmas Eve also heralds the arrivals of evil spirits and witches, which means that households will hide their brooms to prevent them being stolen or used by the malevolent entity. 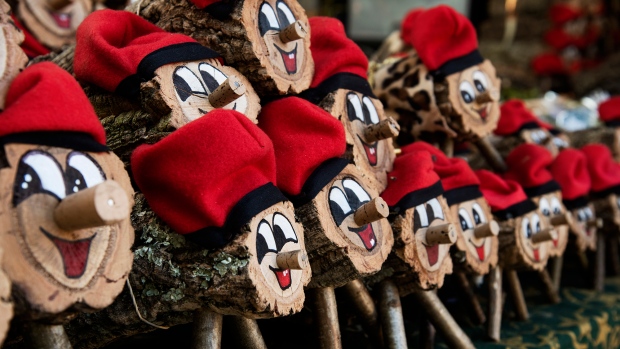 Caga Tio, or “defecating log,” is a tradition from the Catalan region of Spain, where families create a character out of log, which then sits on the dining room table. The family must feed it nuts, sweets and fruit every day leading up to Christmas Eve. That night, the family takes sticks and beats the log to make it “excrete” its treats – all while singing a traditional Christmas song. 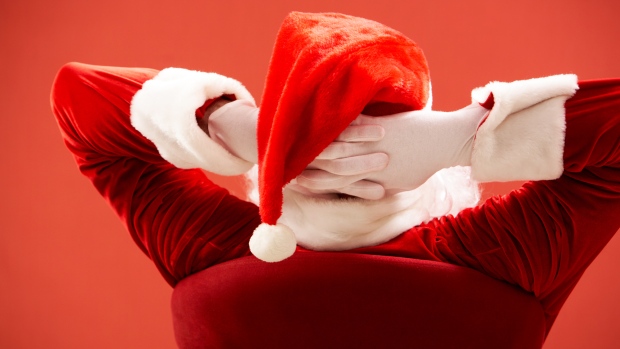 A santa figure laces his hands behind his head. Credit: shironosov / iStock

For those who celebrate Christmas in Japan, the entity of Santa Claus is named “Santa Kuroshu.” He has eyes in the back of his head to keep an eye on naughty children. Japanese people also avoid sending red Christmas cards, as the colour can be associated with death and grieving. 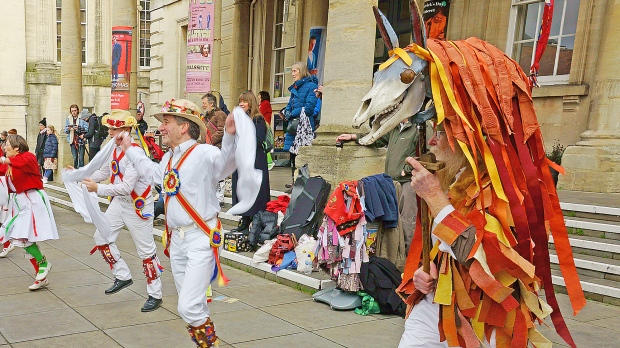 In some Welsh communities, a villager is selected to perform the Mari Lwyd, or Grey Mare, ritual, where a mare’s skull is attached to a pole and carried around the community while villagers sing traditional songs. Whoever is bearing the skull is usually covered by a sheet, which may be decorated with ribbons. The mare’s skull is often spring loaded so that it can appear to “snap” at bystanders. 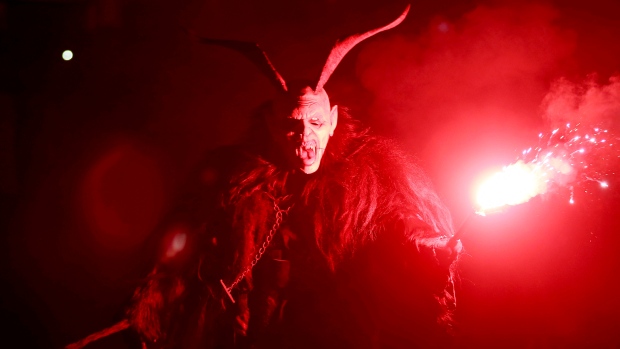 In this Saturday, Dec. 1, 2018, file photo, a man dressed as the pagan character Krampus screeches at spectators during a traditional Krampus run in Hollabrunn, Austria. (AP Photo/Ronald Zak)

The antithesis to Saint Nicholas, the Krampus of Germany and Austria is a half-goat, half-demon beast said to be the son of Norse goddess Hel. The Krampus sports chains and bells, and carries a bundle of sticks to beat naughty children with; he also carries them down to the underworld. 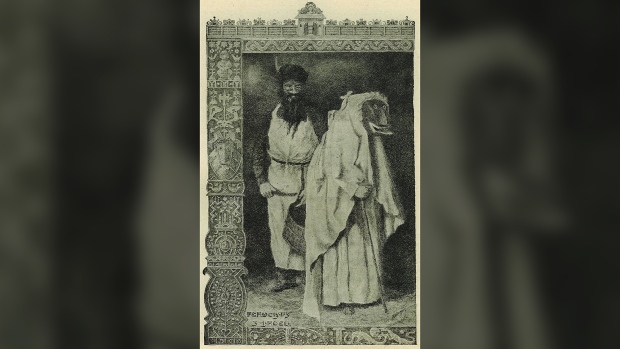 A Christmas witch with a soft spot for entrails, Frau Perchta’s myth stems from pre-Christian times but was popularized by fairy-tale publisher Jacob Grimm. She’s said to take the form of a tall, white robed woman or a terrifying, haggard witch with one large, misshapen foot, which alludes to her ability to shapeshift. Frau Perchta is said to reward good children over Christmas but will slit the belly of bad children, remove their organs and replace them with straw and stones. 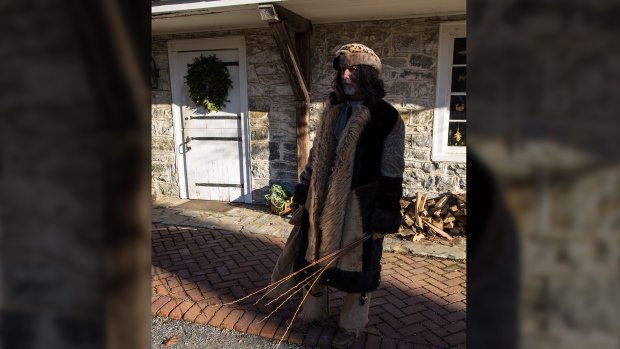 A man dresses up as Pelsnickel with a switch and bag of treats. Credit: gsheldon / iStock

A companion to Saint Nicholas, Pelsnickel was portrayed as a man covered in pelts or fur who visited the homes of children before Christmas, carrying a bag of treats and a switch. Pelsnickel would visit a household and if the children were good, they received gifts and candy. If they were naughty, it was coal and a smack with the switch. 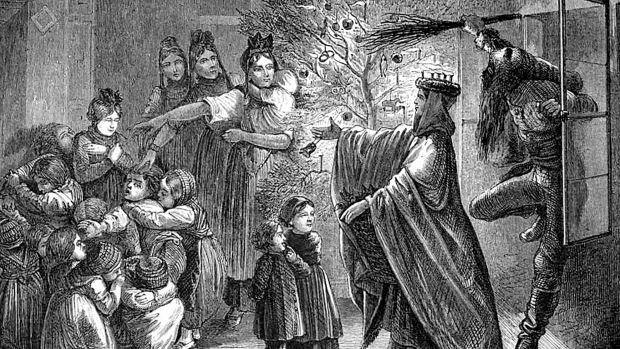 The figure of Hans Trapp climbs through the window of a Christmas celebration in this illustration. Credit: Otto von Reinsberg-Düringsfeld / Wikipedia

Originating in the France-Germany border region of Alsace, Hans Trapp is the legend of an evil man exiled to the woods, where he stuffed his clothing with straw to resemble a scarecrow and preys on children, eating them. After being killed by a lightning bolt for his wicked ways, Hans Trapp became a companion of Saint Nicholas, urging children to amend their wicked ways or end up like him.

Iceland’s Gryla and the 13 Yule Lads 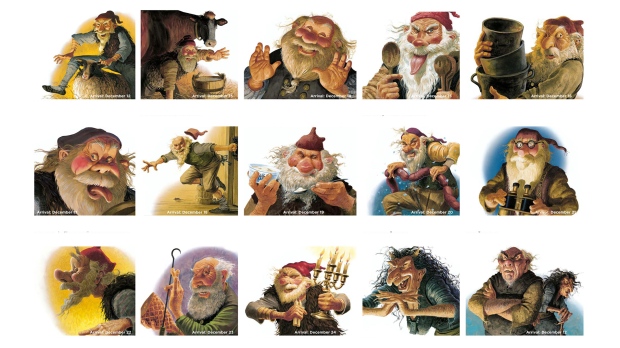 Gryla, her husband and the 13 Yule lads are pictured in this artist's rendering. Credit: www.iceland.is

Usually portrayed as a hideous giantess, Gryla and her 13 sons, referred as the Yule Lads, are the bane of disobedient Icelandic children. Although the Yule Lads tend to be portrayed as mischievous pranksters, Gryla was said to eat naughty children in her cave, putting them into a gruesome stew.