Pantone unveils Colour of the Year for 2022 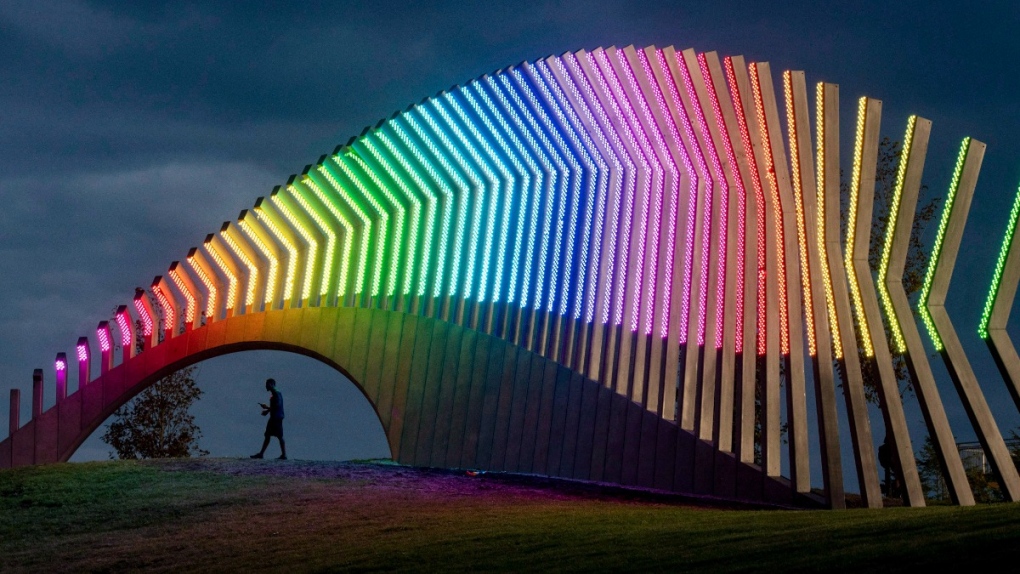 The Moving Surfaces sculpture at Ottawa's Lansdowne Park is lit up in the colours of the rainbow on Aug. 25, 2018. (Justin Tang / THE CANADIAN PRESS)

While many of us will spend the final days of 2021 reflecting on its whirlwind events, global colour authority Pantone has already been busy looking ahead -- to decide on the shade that will best encapsulate 2022.

On Wednesday it unveiled Very Peri, a periwinkle hue that the company says combines the steady tranquility of blue with an energetic infusion of red. It's the first time the company has manufactured a colour instead of delving into their pre-existing archive, a decision that was a vital element of this year's selection process.

"It was really important for us to come up with a new colour, because we have a very new vision of the world now," said Pantone Color Institute's Executive Director Leatrice Eiseman in a video call.

"It is literally the happiest and the warmest of all the blue hues," she added, describing the shade. "Because of that red undertone, it introduces an empowering feeling of newness, and newness is what we're looking for."

The pandemic has heavily impacted how we normally live and work -- posing obstacles that have forced people to think outside the box.

"We've gone through so many challenges over this time, we don't know what's going to pop up from one day to the next," said Pantone's vice president Laurie Pressman, who was also on the call. "It's curiosity that's helping people to get through these difficult times. What we would call courageous creativity."

"The colour symbolizes the future," Eiseman adds. "(It) has that sprightly, joyous attitude that we're talking about, that carefree confidence, and creative spirit."

Introducing the Pantone Color of the Year 2022, PANTONE 17-3938 Very Peri, a dynamic periwinkle blue hue with a vivifying violet red undertone blends the faithfulness and constancy of blue with the energy and excitement of red. Learn more: https://t.co/eNIwkTq2K8 pic.twitter.com/hBfiDusFKU

Each year, Pantone attempts to interpret the zeitgeist through the lens of colour theory -- mining the likes of fashion, design and interiors for clues.

And it's no stranger to making unconventional picks: In 2016, the company chose a gradient made out of two shades, Rose Quartz and Serenity, to reflect a year defined by shifting gender politics. In 2020, not one but two colours -- Ultimate Gray and Illuminating (a vibrant yellow) -- were selected to capture both the resilience and optimism shown during the first year of the pandemic.

The annual task of forecasting the colour that will best reflect the year ahead has been a more than 20-year endeavour, beginning as a desire to cultivate conversations around the power of colour, says Eiseman.

"We first did colour of the year to get people talking about (the role of) colour," she said. "And once you get them talking about it, you then create a buzz and the realization hits them: colour is such an integral part of our everyday lives, but we take it for granted."

In 2021, the company was inspired by a new vertical: technology. From NFTs (non-fungible tokens) and space shuttle joyrides to Mark Zuckerberg's promise of the metaverse, the year was characterized by our increasing reliance on automation and the digital realm. It's a relationship that partly spurred on Pantone's decision to work with Microsoft, among other partners, for its Colour of the Year launch.

Very Peri, for example, will be integrated into a range of Microsoft apps in the form of digital screensavers and interface options for PowerPoint, Teams, Edge and Windows.

Similarly novel is Pantone's imagery -- this year the new shade is unveiled via a piece of digital art as well as the traditional swatch, solidifying the colour's connection to the tech world.

Whether 2022's Very Peri is welcomed with open arms or not, Pressman and Eiseman are simply content with the conversation. "It's astounding to me that I will hear people talking about the colour of the year, people that aren't otherwise connected to colour in any way," said Eiseman.

"We've seen it grow incrementally over the years. And we're somewhat astounded by it, but delighted by it," she continued. "Because that's our purpose."