A Colorado physicist and his son have taken 3D printing to the next level.

Sterling Backus , the chief scientific officer at KMLabs Inc., is building a 3D-printed, full-size version of the Lamborghini Aventador, a US$400,000 supercar with an appearance similar to the Batmobile.

Backus said he got the idea to make a lookalike about 18 months ago after his son became enthralled with the car while playing the racing video game Forza.

“We got into a Lamborghini Aventador in the game and (my son) thought that was a fantastic car and so he asked me if we could build one,” Backus said.

For safety reasons, the lookalike has a frame made of steel, but the panels, interior and several other parts are entirely 3D printed. Backus intends to use a supercharged engine from a 2003 Chevrolet Corvette to make it go fast.

“It’s -- I would say -- about 75 per cent complete,” Backus said. “We think we’ll get it on the road probably in about an October timeframe.”

Once the car is complete, he intends to take to local schools in hopes of inspiring children to pursue a career in the sciences.

Despite the real Lamborghini’s hefty price tag, Backus said he had a budget of just $20,000 for the project and expects to meet it.

As for his son, Backus said he has a “10-minute attention span,” but helps with the project when can. 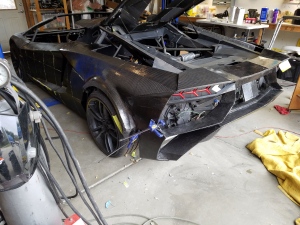