A life of pie: B.C. woman bakes works of art, hopes to create a new industry 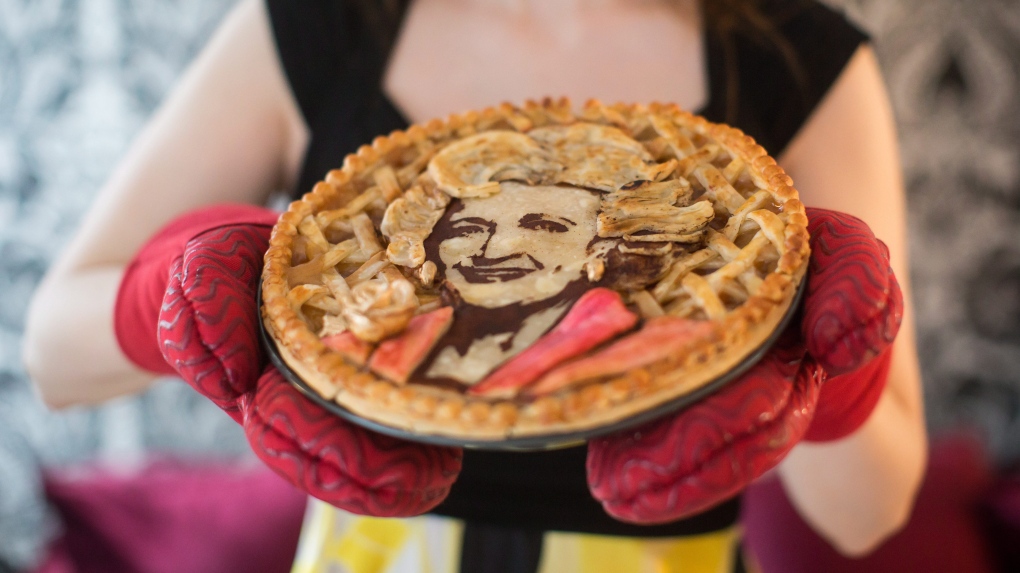 Jessica Clark-Bojin holds an apple pie that she made bearing a likeness of actor and comedian Betty White, at her home in Vancouver, B.C., on Thursday January 25, 2018. THE CANADIAN PRESS/Darryl Dyck

VANCOUVER -- Jessica Clark-Bojin remembers at one time having a reputation for her lack of cooking skills.

"I couldn't crack an egg. I was shooed out at family gatherings," says the Vancouver native, laughing. "I had no experience in a kitchen whatsoever."

Now Clark-Bojin is shaking up the baking world with her elaborate pie creations, which range from detailed celebrity portraits to towering three-dimensional "pie-scrapers."

The former filmmaker's journey from kitchen klutz to pastry pro started with a New Year's resolution to cut down on sugar in 2016, when she began experimenting with pies to sate her dessert cravings. What began as a creative foray has become a full-time gig.

"It's the most fun job that I've ever had in my life," she said. "I never thought I'd be doing anything like this."

Clark-Bojin's multi-tiered masterpieces include Calvin and Hobbes riding a wagon down a hillside and an Aladdin-themed castle. The self-described science fiction nerd has also concocted a glow-in-the-dark Tron apple pie and Star Wars themed fruit turnovers shaped like Jabba the Hut.

Along the way, Clark-Bojin has tapped into her science background as a former university physics student to develop new methods and materials. Her innovations include colouring pastry dough, creating pigments that glow in the dark and baking three-dimensional shapes.

"This isn't cooking. This is chemistry!"

The American talk show The Chew invited Clark-Bojin to New York to present a pie on the show in late 2016, which was followed by an invitation from the Food Network to start making videos for the cooking channel, she said.

Pies are especially challenging because pastry dough quickly becomes tough when overworked and its inconsistency means it often changes shape unpredictably in the oven, Clark-Bojin said.

She said one "aha moment" came while designing an alien face from the sci-fi franchise "Predator," when Clark-Bojin came up with a method of blending different layers of pastry together, "like modeling clay," using an egg mixture.

"That opened a whole new world," she said.

Clark-Bojin said most of her baking gets done late at night after her five-year-old son, Cillian, is in bed. She described him as her harshest critic.

"He'll look at something that I've been slaving over for days and I'm really proud of and he'll be like, "Hmm. It's not your best work, mommy,' " she said.

Clark-Bojin doesn't sell her pies directly. She supports her work by offering how-to guides and dough stencils for sale.

Her next task is to simplify her techniques.

"My mission with all of this is not just to be a snooty pie artist," she said, adding that the overall goal is to create a new industry.