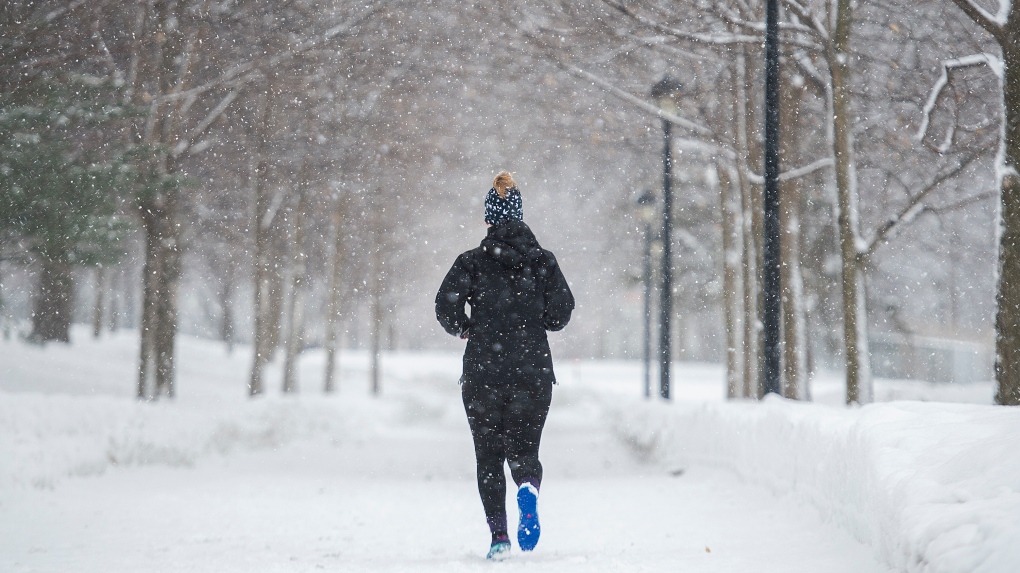 A person jogs in a park as snow falls in Montreal in this Saturday, February 27, 2021 file photo. (THE CANADIAN PRESS/Graham Hughes)

Hurry up for your health: according to a new study, walking faster may lower the risk of heart failure.

Published Thursday in the Journal of the American Geriatrics Society, the study showed that less than one hour of fast weekly walking led to the same heart-health benefits as casually walking for more than two hours a week.

Dr. Charles B. Eaton, the study’s senior author, is a physician, clinical epidemiologist and medical professor at Brown University in Rhode Island.

“This study confirms other studies demonstrating the importance of walking speed on mortality and other cardiovascular outcomes,” he said in a news release.

The study looked at the walking habits and heart health of 25,183 mobile and postmenopausal women, aged 50 to 79. When the researchers followed up with them after approximately 17 years, 1,455 women said they had been hospitalized for heart failure.

The researchers found that compared with those who reported walking at a casual pace of less than 2 mph (3.2 km/h), the women who walked at an average speed of 2 to 3 mph (4.8 km/h) had a 27-per-cent lower risk of heart failure, while the faster walkers had a 34-per-cent lower risk.

Adult humans generally walk at about 5 km/h, around the same rate as the study’s speedy seniors.

In a busy world, Dr. Eaton says picking up the pace may be key to healthier hearts.

“Given that limited time for exercise is frequently given as a barrier to regular physical activity,” he explained, “walking faster but for less time might provide similar health benefits as the recommended 150 minutes per week of moderate physical activity.”

Canadian meets her long-lost sister for the first time on U.S. morning show

During an appearance on ABC's Good Morning America on Wednesday, adopted siblings Hannah Raleigh of Chicago and Limia Ravart of Montreal met in person for the first time after an ancestry test confirmed the two are in fact related.

A fire in the neonatal unit of a hospital in Senegal has killed 11 newborns, President Macky Sall said. Only three infants could be saved.