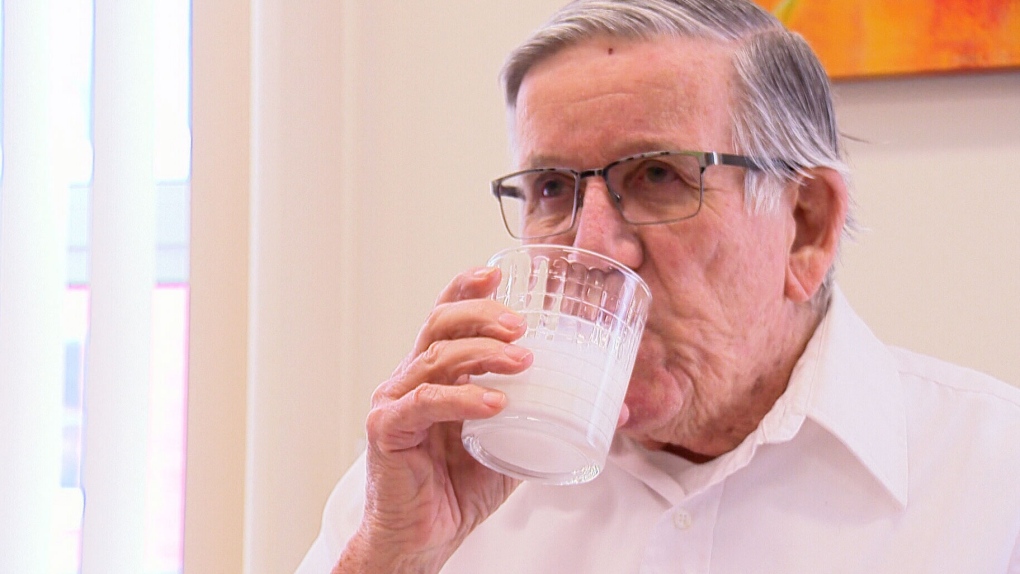 A drink derived from coconut oil can now be used to fight memory loss, according to a Quebec researcher.

TORONTO -- A ketogenic drink developed by a Quebec professor to treat mild cognitive impairments in older adults that can lead to Alzheimer’s and dementia will be hitting the shelves soon, after years of research.

Stephen Cunnane, of the Universite de Sherbrooke, has been investigating the potential benefits of ketones for the brain for some time. He told CTV News in 2019 that the brain functions “kind of like the hybrid car.”

Glucose -- sugar -- is the main source of energy for the brain, but as we age, our brains have a harder time processing this. If they don’t get enough energy, cognitive functions such as memory and executive function can falter. Some older adults experience a loss of cognitive functions that is worse than expected of normal aging — a condition called mild cognitive impairment (MCI), which is often the precursor to more severe cognitive issues associated with aging, such as Alzheimer’s or dementia.

Cunnane’s solution? Find a new fuel for the brain.

“The energy problem in the brain can be corrected by supplying the ketones to replace the problem with glucose,” he said.

Ketones are chemicals produced by the liver, which processes fat into this source of energy when it senses that you don’t have enough carbohydrates and glucose to power the body.

To test Cunnane’s theory that ketones could help with brain function, they ran a series of six-month trials.

Nestle Health Science funded part of the clinical trials, and are also funding the marketing of the resulting product.

First, researchers ran a trial where 52 seniors with MCI consumed either a placebo, or a liquid supplement rich in ketones twice a day.

After promising results, the trial was repeated for another six months, this time with more than 80 participants. Thirty-nine participants took 15 grams of ketogenic medium chain triglyceride (kMCT) twice a day, while 44 took a placebo. MCTs, which can be easily derived from coconut oil, encourage the body to produce more ketones.

The results of this new trial, published officially this week in the journal Alzheimers & Dementia found that those who had the ketogenic drink demonstrated improved memory function, verbal fluency and executive function as compared to those who took the placebo.

“Using a variety of tests and neuroimaging, we were able to observe the ketones used by the brain and to demonstrate improved cognitive performance in the participants who consumed the beverage,” Cunnane said in a press release. “These results could significantly change the quality of life of people living with mild cognitive impairment (MCI), a phase that can precede Alzheimer’s disease.

“There has been no treatment for MCI until now, which means that this a ‘world first’ achieved completely in Sherbrooke,” he added.

The result of this research is now being introduced to the market as BrainXpert. The ketogenic drink will be sold under this brand name first in Europe, starting within the next couple of weeks, as a dietary treatment for those with MCI.

The medication, which is already available for sale online, takes the form of sachets of powder that are intended to be dissolved into cold drinks — water, milk, etc. — and then consumed, once in the morning and once in the afternoon, both times during a meal.

Researchers are hoping this development will encourage more research into how ketones could potentially help with more severe cognitive diseases.

“Nearly one in five Canadians over 65 experiences memory problem,” the press release stated. “Half of these cases get worse over time and lead to Alzheimer’s. Treatment of this neurodegenerative disease needs to start as early as possible with a preventive approach because the illness can lie “dormant” in the brain for years before the first symptoms appear.”