How long can food stay in your freezer? Safety experts have the answer 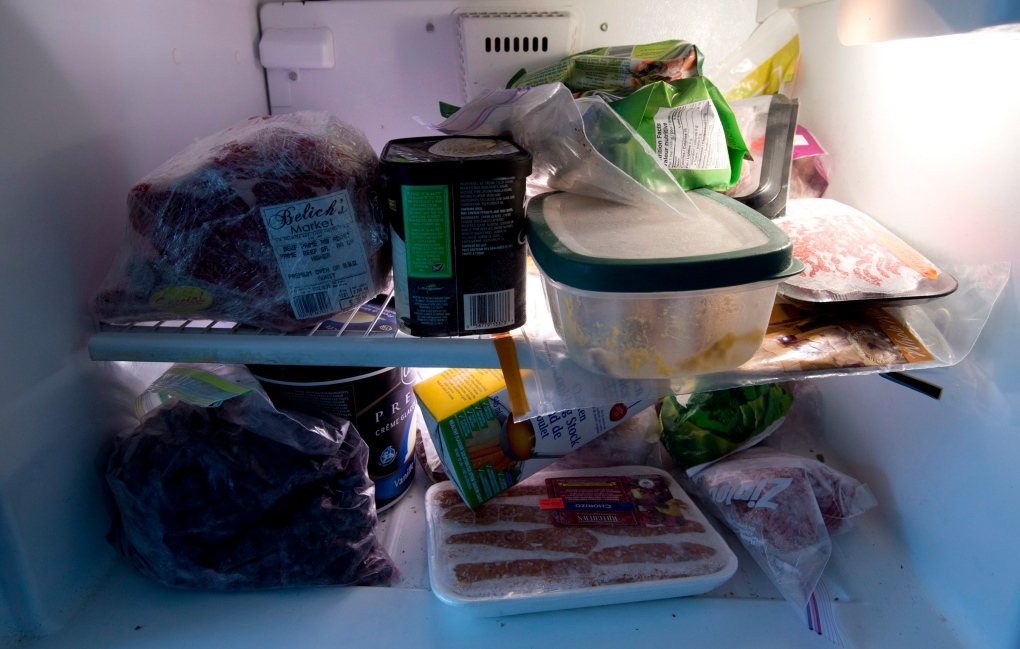 TORONTO -- You reach into your freezer and pull out an hoarfrost-encrusted meat product of dubious origin. You have no idea how long it's been there, you didn't think to label it and now you are wondering: Is this safe to eat?

Freezing food is one of the safest ways to preserve food at home for future use -- much safer than home canning, which if done incorrectly can produce food contaminated with the toxin that causes botulism.

There is no such safety risk with frozen food. And in fact, the process can actually enhance the safety of one type of food we often pop into the freezer, poultry.

"While something's actually frozen in the freezer there's nothing going on that's changing the safety of it," says Elizabeth Andress, a food safety specialist at University of Georgia at Athens.

"Quality can continue to deteriorate, but there's really no safety issues while it's in the freezer."

All those guidelines about how long you can freeze this type of fish or that cut of meat relate to how much damage the food will sustain going through the freezing and thawing processes.

The recommendations are geared to palatability. So the question isn't 'Will this make us sick?' but 'Would we want to eat this?'

"I think that there's a common misperception that people think food becomes unsafe the longer it sits in the freezer," says Andress, who also works with the U.S. National Center for Home Food Preservation.

"You know, that they think that there's an absolute cut-off date for safety. And it really is quality. Because as long as it stays frozen, it's not becoming less safe."

The risks that do exist come from the way food is prepared for freezing -- clean hands! clean surfaces! -- and the way frozen food is thawed.

If you are freezing something that's been cooked -- soups or chili or a casserole -- be careful about how you cool it down. While you shouldn't put hot food directly into a freezer, you don't want to let it sit around at room temperature for too long either.

Andress says in food safety people talk about the "temperature danger zone." That's the point where food isn't cold enough to suspend the activity of any bacteria that might be present, and isn't hot enough to kill them. That zone is between 4.4 C to 60 C (40 F to 140 F).

So once food is cool enough to go into the fridge, it can spend some time there before being transferred to the freezer.

And that's the route food should follow when it's time to thaw frozen meats and fish and cooked food, says Doug Goff, a professor of food sciences at the University of Guelph in Ontario.

"Bacteria won't reproduce in the freezer, but freezing won't kill them. So whatever was in your food when you froze it will be there again when you thaw it," he explains.

Where this problem often comes into play is with the behemoths of protein, turkeys. Rock hard in the freezer, these holiday favourites take forever to defrost in a fridge, using up lots of precious space while they do. But that really is the right place for them, Goff says.

"People pull it out of their freezer and they leave it on their counter overnight to thaw. Well, the surface (of the bird) gets up to room temperature before the core of it is thawed. And if there's bacteria on the surface, well, they are growing at a normal rate," he explains.

Another option is to submerge the food to be thawed -- encased in packaging, of course -- in cold water. But the water must be cold -- no hotter than 4 C (40 F), says Rick Holley, a food safety microbiologist at the University of Manitoba.

Holley says people will make the mistake of putting a large turkey in water and then letting it sit while the temperature of the water rises. You're not giving the turkey a bath; the water should be cold and should be replaced when it warms up. Adding ice cubes can help by providing a visible cue, he says.

Freezing poultry can actually enhance the safety of the meat, Holley says. While some bacteria will reactivate once a frozen product that contains them thaws, at least one type, Campylobacter, does not survive freezing well. Campylobacter is the leading cause of foodborne illness in Canada, he says.

Freezing actually cuts back on the concentration of these bacteria in or on contaminated food, says Holley, who says studies have shown that Campylobacter-associated foodborne illnesses decline when people eat only previously frozen poultry products.

There is another misperception about frozen food, though it's one the experts are almost reluctant to talk about.

It's that rule about not refreezing things. Turns out it's not entirely true.

If something is frozen and thawed, it can be refrozen -- as long as it was defrosted safely. So if you started to defrost a roast in the fridge and then realized you didn't need it, you could put it back in the freezer.

That would not be advisable for something that was thawed outside a fridge, the experts say. And they warn that the damage to taste and texture that comes from freezing would be exacerbated by refreezing.

So does this mean that if the power goes out you really don't have to throw out everything in the freezer? Holley suggests it really depends on how long the power was off, how warm it got in the freezer -- and how certain you are that you know the answers to those questions.

"But generally speaking if you have a very good idea how long the freezer's been off and that the temperature has not gone above 4 C, most foods will still be safe -- depending upon, of course, how long they've been at 4 C," he says.

"So you'd have to have a very good idea the period of time the unit was down."