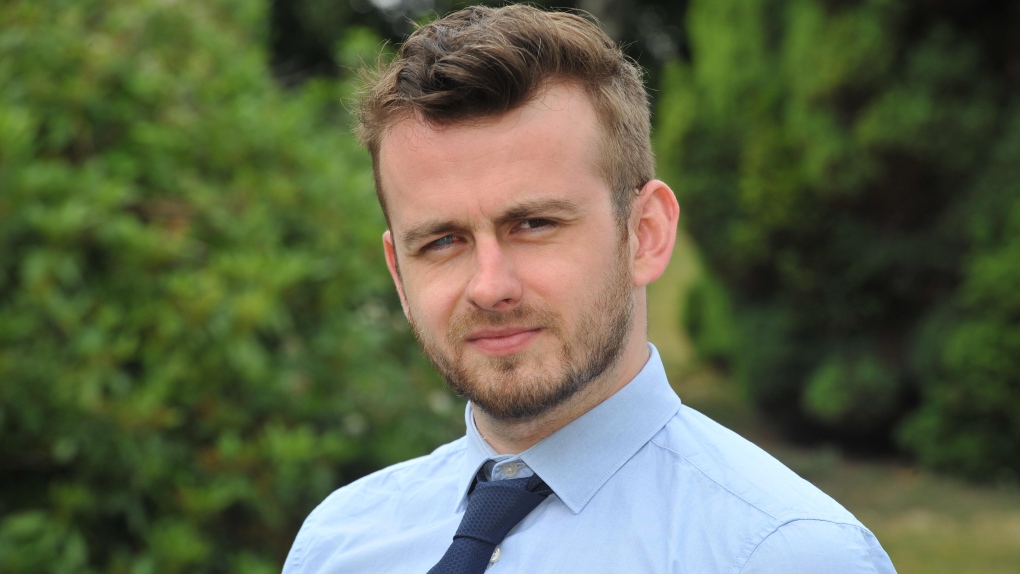 Nick Humphreys, 29, who works for the Shropshire Star newspaper in England, has suffered 18 months of misery after the parasite found in a droplet of water ruined his eyesight.(Express & Star)

WARNING: This story features images which some readers may find disturbing

A local newspaper reporter has warned others not to wear contact lenses while showering, after water-borne organism rendered him blind in one eye.

Nick Humphreys, 29, who works for the Shropshire Star newspaper in England, has suffered 18 months of misery after the parasite found in a droplet of water ruined his eyesight.

Keen soccer player Humphreys wrote a first person account of the excruciating pain caused by acanthmoeba keratitis (AK), a rare disease in which amoebae invade the cornea of the eye.

“Lurking in our water and soil is a parasitic bug which can destroy your eye and leave you blind,” Humphreys wrote.

Having worn contact lenses since 2013 with no problems, he first noticed something was seriously wrong in January 2018, when his right eye was dry for a week.

“I simply put it down to early mornings and a lack of sleep. But this was something more,” he wrote.

“For a few days I used over the counter eye drops and turned all my phone and computer display settings down to the lowest brightness.

“But after the pain became too much, I went to the optician, and was told I had an ulcer on my eye and was advised to go to the Royal Shrewsbury Hospital immediately.”

After consulting with eye specialists he had five scrapings from his right eye sent for testing, which confirmed AK.

After using disinfectant eye drops for three weeks, Humphreys experienced some improvement, but by March 2018 was completely blind in one eye.

“I was driving to work and my vision completely went in my right eye,” he wrote. “I don’t know how I managed not to crash, but it didn’t take me long to realise I needed to get back to the hospital.”

Doctors prescribed higher strength drops that needed to be applied hourly, even at night. The organism had returned, rendering Humphreys housebound for six months.

“I couldn’t read a page of a newspaper without being in excruciating pain, light sensitivity was so bad I had to keep the curtains drawn at all times,” he wrote.

The journalist spent spring and summer 2018 going back and forth to appointments at the eye hospital, as the condition worsened. Doctors didn’t know how to fix it.

“Eventually, in July, my doctor tried experimental cross-linking surgery, a procedure normally used on patients whose cornea has developed into a cone shape,” he wrote.

“It involves the surgeon scraping back layers of skin on the eye, pouring in vitamin drops and blasting it with a UV light. To my huge relief, it killed the bug and ended the pain.”

A second operation followed in September, to speed up the healing after months of drops and the previous invasive procedure.

“I had an amniotic membrane transplant, which involved having graft material placed on the cornea and glued down underneath a hard contact lens,” Humphreys explained.

“In my case though, the glue didn’t work, so it had to be stitched onto my eyeball.”

The operation was a success, but Humphreys said he suffered anxiety and depression after pulling back the safety patch and seeing a “monster” in the mirror.

“Fortunately it has healed to a point where, with glasses on, it’s not too noticeable to others,” he wrote.

The blindness will persist until Humphreys has a full corneal transplant on August 15, which will involve cataract surgery.

“I will owe a monumental debt of gratitude to my donor,” he wrote.

Humphreys is working with the Fight for Sight charity to raise awareness of the dangers of wearing contact lenses while swimming or in the shower.

“I can honestly say if I’d had the slightest idea that this was even a remote possibility I would never have worn contacts in the first place,” he wrote.

“I’ve lost 18 months of my life because of something as simple as showering with contacts in.”

He has called on contact lens makers to put warnings on packaging.

“Acanthamoeba is a parasite which is actually ubiquitous, it’s present in water and soil,” Dr. Shahzad Ihsan Mian from the Kellogg Eye Centre at the University of Michigan explained.

“Eye infections are not common overall, but patients who wear contact lenses are at increased risk of getting any kind of eye infection.

“When it does occur it’s a very serious infection, it’s very difficult to treat. The best thing to do is try to prevent it.”

Good contact lens hygiene is the best form of prevention against the organism, Dr. Mian said.

Overnight wearing of contacts is also associated with increased risk of infection, it states.