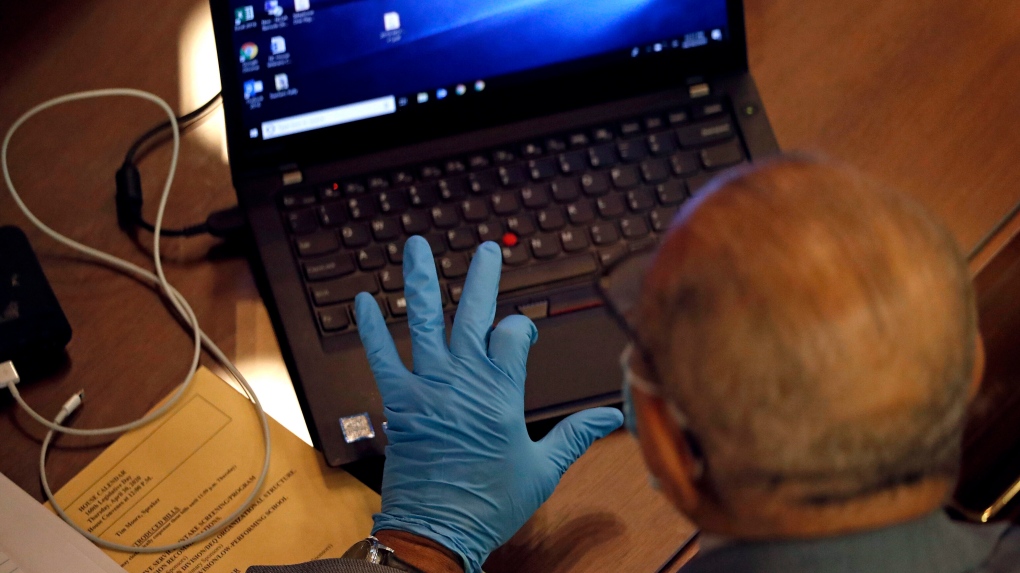 A lawmaker uses gloves while working on a computer as North Carolina legislators convene on the House floor in Raleigh, N.C., Thursday, April 30, 2020. (AP Photo/Gerry Broome)

TORONTO -- Global internet usage has increased substantially during the COVID-19 pandemic, with users around the world going online more than ever to watch videos and use social media, according to a new Canadian report.

The report released Thursday by Waterloo, Ont.-based network management company Sandvine found that overall internet traffic grew by more than 40 per cent between Feb. 1 and April 19, with almost all of that increase occurring in March and April.

According to the report, video streaming is now responsible for 58 per cent of all internet traffic Sandvine monitors, while social networking (11 per cent) has displaced general web browsing (eight per cent) as the second-most-popular online activity.

Among video platforms, YouTube has been the clear winner of the pandemic era, traffic-wise. Sandvine found that its share of global internet traffic rose from less than nine per cent in 2019 to nearly 16 per cent this year.

Netflix has seen its share fall slightly to 11.4 per cent even though it too is seeing far more traffic than before the pandemic – partially because its boost hasn't been as big as some other streaming platforms', and partially because it, like YouTube and other high-bandwidth video giants, has chosen to reduce its default playback quality to help the internet handle the surge in demand.

The report also found big increases in traffic from video-conferencing software, VPN connections and gaming since the onset of COVID-19. Gaming-related traffic, while only four per cent of total internet activity during the pandemic, is twice as heavy as it was in 2019.

Sandvine based its findings on data from the network operators it works with, which it says provide service to 2.5 billion internet users. The company says it has little data on internet usage patterns in China and India, but its data is statistically significant on a global scale.

Similar conclusions are reached in a May 4 report from the Organization for Economic Co-operation and Development (OECD), which found that broadband networks are seeing traffic increases of up to 60 per cent – with Canada seeing the highest jump of the 14 countries measured.