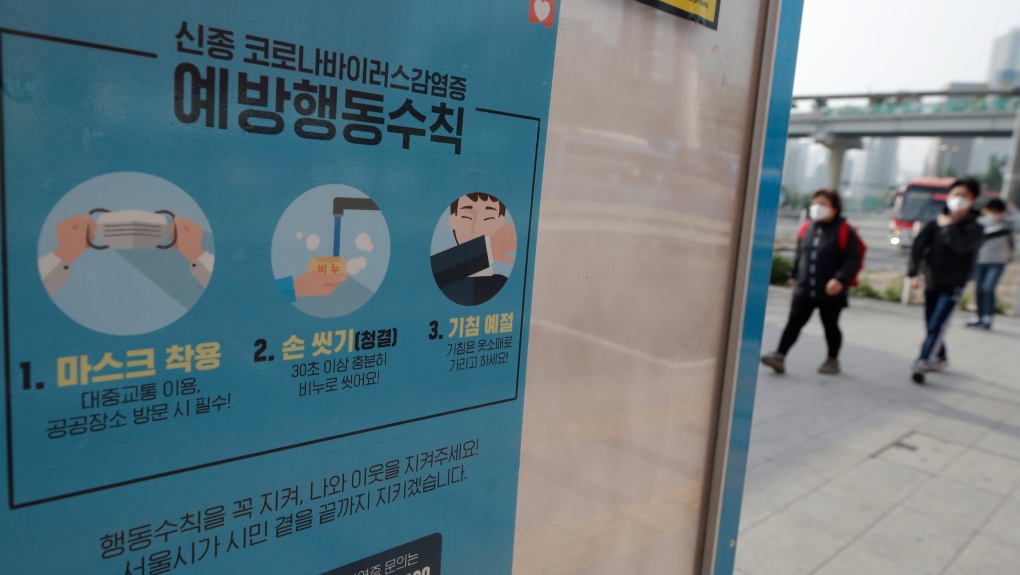 BANGKOK -- South Koreans will be required to wear masks when using public transportation and taxis nationwide starting Tuesday as health authorities look for more ways to slow the spread of the coronavirus as people increase their public activities.

Health Ministry official Yoon Taeho on Monday said masks also will be enforced on all domestic and international flights from Wednesday. From June, owners of "high-risk" facilities such as bars, clubs, gyms, karaoke rooms and concert halls will be required to use smartphone QR codes to register customers so they can be tracked down more easily when infections occur.

South Korea was reporting 500 new cases per day in early March before it largely stabilized its outbreak with aggressive tracking and testing. But infections have been rising slightly since early May, with more people going out during warmer weather and eased social distancing guidelines, causing concern in a country that has just started to reopen schools.

"Until treatments and vaccines are developed, we will never know when the COVID-19 crisis could end, and until then we will have to learn how to live with COVID-19," Yoon said.

It will be up to bus drivers and subway station workers to enforce masks on public transportation, while taxi drivers will be allowed to refuse passengers who aren't wearing masks. Customers who refuse to download QR codes at entertainment venues will have to write their personal information by hand instead.

South Korea has reported 11,206 COVID-19 cases, including 267 fatalities. The recent increase in infections has been centred around the densely populated Seoul metropolitan area, where more than 200 cases were linked to nightclubs and other entertainment venues.

In other developments in the Asia-Pacific region:

WUHAN CONDUCTS MASSIVE TESTING: The Chinese city of Wuhan has conducted more than 6.5 million coronavirus tests over a 10-day period in a bid to test all its 11 million residents, state media said Monday. The city's health commission, in a post on its website, asked anyone who hasn't been tested to come forward by the end of Tuesday. No new COVID-19 cases have been reported since the 10-day campaign started, though some people with no symptoms tested positive. More than 3 million people had been tested prior to the campaign, the official Xinhua News Agency said. Wuhan, where the global pandemic is believed to have started late last year, was by far the city hit hardest in China.

SOUTH KOREA SENDS MASKS: South Korea plans to send 370,000 face masks to tens of thousands of South Koreans adopted in the West to help them weather the coronavirus. The Foreign Ministry said its diplomatic missions will work with dozens of international adoption groups to distribute the masks in 14 countries. South Korea has been a major source of babies for adoption in the West since the end of 1950-53 Korean War. According to official figures, there are around 167,000 adopted South Koreans living abroad, but experts say the actual number is closer to 200,000.

JAPAN LIFTS EMERGENCY: Japanese Prime Minister Shinzo Abe lifted a coronavirus state of emergency in Tokyo and four other remaining prefectures on Monday, ending the declaration that began nearly eight weeks ago. The emergency was softer than the lockdowns imposed in many countries, and requested rather than required businesses to shut and people to stay home. But those measures as well as mask-wearing and social distancing slowed infections and eased pressure on the medical system. Abe also announced a new stimulus package worth about 100 trillion yen ($930 billion) to provide financial support for companies hit by the coronavirus. Japan has 16,580 confirmed cases and 830 deaths.

INDIA FLIGHTS BACK IN AIR: Domestic airline travel partially resumed in India, which is easing its virus lockdown despite adding more than 6,000 new infections per day. At New Delhi's Indira Gandhi International Airport, passengers in masks or full protective suits stood in long lines to show identification and boarding passes to security personnel standing behind plastic partitions. Ticket machines have been shifted outside, where airport workers sanitized baggage and stalls stocked masks, sanitizer and face shields. Commercial flight traffic returned across India except for the states of Andhra Pradesh and West Bengal. India's Supreme Court has ordered social distancing norms in airports and in flight, forcing airlines to keep middle seats open.

MORE AUSTRALIANS BACK IN SCHOOL: Students in two more Australian states returned to school full-time as numbers of COVID-19 patients in hospitals across the country fall. New South Wales and Queensland states joined the less populous Western Australia and South Australia states and the Northern Territory in resuming face-to-face learning instead of studying from home online. Queensland Premier Annastacia Palaszczuk said students and teachers should stay home if they are sick, noting "We're not out of the woods yet." New South Wales Premier Gladys Berejiklian said school absences appeared to be higher than normal. Australia's remaining jurisdictions plan to send students back to school in stages through early June.

FIJI AIRWAYS LAYOFFS: Fiji's national airline is laying off more than 750 staff, about half of its workforce, as it struggles for its survival. Remaining employees will have their pay reduced by 20% and only get paid for the days they work. CEO Andre Viljoen said the company is negotiating with lenders and aircraft lessors for payment deferrals. He said Fiji Airways expected to receive almost zero revenue over the coming months due to cancelled international flights because of the pandemic.

NEW ZEALAND TO ALLOW CROWDS: New Zealand plans to further loosen its coronavirus restrictions by increasing the maximum size of gatherings from 10 people to 100. Prime Minister Jacinda Ardern said the change would take effect midday Friday. The timing is designed, in part, to allow religious services to proceed that day and over the weekend. New Zealand has reported just one new case of coronavirus over the past week. Ardern attributed that success to a strict early lockdown and people's ongoing vigilance. "We are still in a global pandemic," Ardern said. "Cases continue to grow overseas, and we still do have people coming home. But for the most part, many aspects of life can and should feel much more normal."