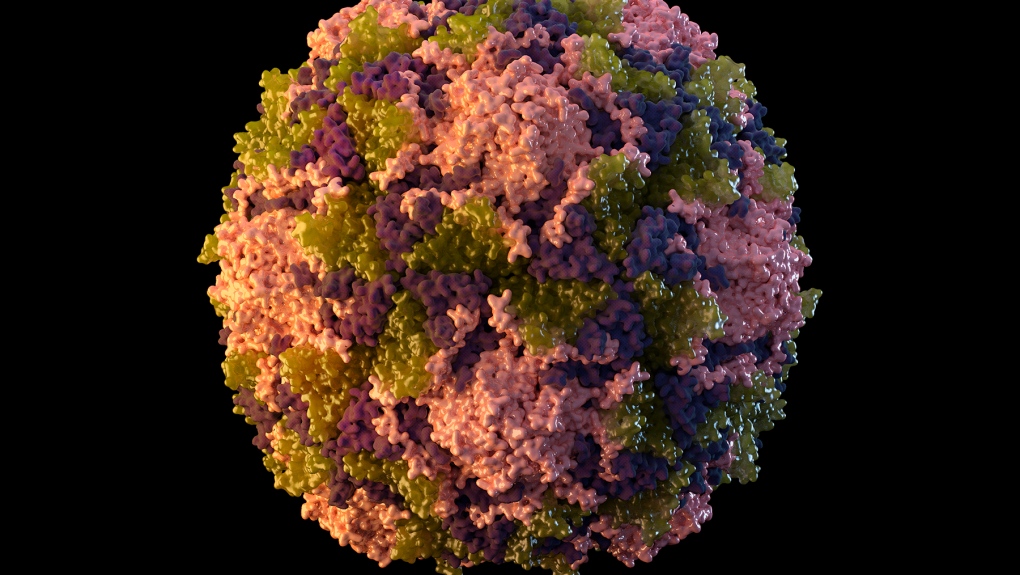 This 2014 illustration made available by the U.S. Centers for Disease Control and Prevention depicts a polio virus particle. (Sarah Poser, Meredith Boyter Newlove/CDC via AP)

Canadian infection experts are taking note after U.S. officials reported last week that an unvaccinated American was diagnosed with the country's first case of polio in nearly a decade.

Health Canada has not recorded a case of the virus in more than 25 years, but infectious disease experts say they always have their “ears up and eyes open for vaccine-preventable illnesses like polio” that continue to circulate elsewhere in the world.

The polio vaccine is part of children's standard set of shots, but Dubey said some parents are opting not to vaccinate their kids and the COVID-19 pandemic has delayed vaccination for others.

That's creating a renewed risk of vaccine-preventable diseases as people return to international travel after a two-year break, she said. Global polio vaccination efforts were put on hold for part of that time, compounding the problem.

A single case of polio triggers a public health response and is reportable under international health regulations. By the time a case of paralysis from polio is diagnosed, many more people have likely been infected.

That's the fear in Rockland County, N.Y., where a patient was diagnosed with polio after experiencing paralysis. Officials are holding vaccine clinics and asking health-care providers to watch for more cases.

Poliovirus is highly contagious and usually causes no symptoms or mild symptoms such as low-grade fever, malaise, nausea, diarrhea and sore throat. Illnesses are most common in infants and young children, but adults who are not fully immunized can also become sick. The virus attacks the nervous system, with one to five per cent of infections causing meningitis and less than one per cent resulting in paralysis.

Polio cases in Canada decreased markedly with the introduction of immunization programs in the 1950s, when up to 5,000 children had polio per year. The last case of wild poliovirus in Canada occurred in 1977, while cases associated with oral vaccines continued until 1995.

Polio infection can occur from the spread of wild virus or from transmission of the virus after a child receives the oral polio vaccine, which Canada stopped administering in 1996 but remains in use in many other countries.

With the oral vaccine, the virus goes through the body and is excreted in the stool. The virus then spreads easily, infecting the next person when it gets in their mouth from feces-contaminated hands. The virus can also live in the throat and can be spread by respiratory secretions. People who are immunized can pick up and transmit the virus but don't typically become sick.

Canada's routine childhood vaccine schedules include injectable polio vaccines before the age of two years and a booster at four to six years. The injectable form of the vaccine is inactivated and does not transmit the virus person-to-person.

With summer travel in full swing, experts said both adults and children should have their routine immunizations up to date and check whether they need additional vaccines for their destination.

“Vaccine hesitancy is another effect of the pandemic,” said Dr. Valerie Lamarre, an infectious disease pediatrician at St. Justine Hospital in Montreal, “It definitely didn't improve the situation with vaccine-preventable diseases.”

And while the case of polio in the U.S. is not a threat to Canada, Lamarre said that doesn't mean it should be ignored.

“We're going to see these cases pop up from time to time. This one just means, 'Wake up people. Get your vaccines,”' she said. “These diseases are preventable.”

This report by The Canadian Press was first published July 26, 2022.

Michelle Ward is a pediatrician, associate professor and journalist in Ottawa.

Canada's Evan Dunfee says he drew on the support of his loved ones to propel him to a Commonwealth Games gold medal.