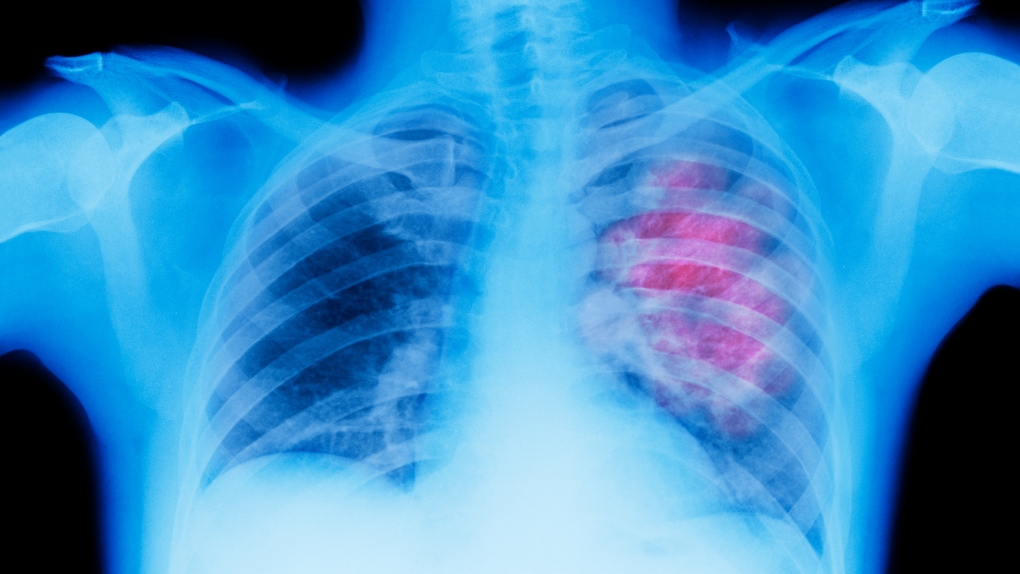 Seen here is an illustration of an X-ray depicting lung cancer. A new study shows that nearly half of deaths due to cancer can be attributable to preventable risk factors. (Peter Dazeley/The Image Bank RF/Getty Images/CNN)

Globally, nearly half of deaths due to cancer can be attributable to preventable risk factors, including the three leading risks of: smoking, drinking too much alcohol or having a high body mass index, a new paper suggests.

The research, published Thursday in the journal The Lancet, finds that 44.4% of all cancer deaths and 42% of healthy years lost could be attributable to preventable risk factors in 2019.

"To our knowledge, this study represents the largest effort to date to determine the global burden of cancer attributable to risk factors, and it contributes to a growing body of evidence aimed at estimating the risk-attributable burden for specific cancers nationally, internationally, and globally," Dr. Chris Murray, director of the Institute for Health Metrics and Evaluation at the University of Washington, and his colleagues wrote in the study.

The paper, funded by the Bill & Melinda Gates Foundation, analyzed the relationship between risk factors and cancer, the second leading cause of death worldwide, using data from the Institute for Health Metrics and Evaluation's Global Burden of Disease project.

The leading cancers in terms of risk-attributable deaths globally in 2019 was tracheal, bronchus and lung cancer for both men and women, the researchers found.

The data also showed that risk-attributable cancer deaths are on the rise, increasing worldwide by 20.4% from 2010 to 2019. Globally, in 2019, the leading five regions in terms of risk-attributable death rates were central Europe, east Asia, North America, southern Latin America and western Europe.

"These findings highlight that a substantial proportion of cancer burden globally has potential for prevention through interventions aimed at reducing exposure to known cancer risk factors but also that a large proportion of cancer burden might not be avoidable through control of the risk factors currently estimated," the researchers wrote. "Thus, cancer risk reduction efforts must be coupled with comprehensive cancer control strategies that include efforts to support early diagnosis and effective treatment."

The new study "clearly delineates" the importance of primary cancer prevention and "the increasing cancer numbers related to obesity clearly demands our attention," Dr. William Dahut, chief scientific officer for the American Cancer Society, who was not involved in the new study, wrote in an email to CNN.

"Modifying behavior could lead to millions more lives saved greatly overshadowing the impact of any drug ever approved," he wrote, adding, "The continued impact of tobacco despite approximately 65 years of a linkage to cancer remains very problematic."

Although tobacco use in the United States is less than in other countries, tobacco-related cancer deaths continue to be a major problem and disproportionately impact certain states, Dahut wrote.

A separate study, published earlier this month in the International Journal of Cancer, found that the estimated proportion of cancer deaths in 2019 attributable to cigarette smoking in adults ages 25 to 79 ranged from 16.5% in Utah to 37.8% in Kentucky. The estimated total lost earnings due to cigarette smoking-attributable cancer deaths ranged from $32.2 million in Wyoming to $1.6 billion in California.

"In addition, it is no secret that alcohol use as well as the dramatic increase in the median BMI will lead to significant numbers of preventable cancer deaths," Dahut added. "Finally, cancer screening is particularly important in those at increased risk as we move to a world where screening is precision based and adaptable."

In an editorial that was published alongside the new study in The Lancet, Dr. Diana Sarfati and Jason Gurney of Te Aho o Te Kahu Cancer Control Agency in New Zealand wrote that preventable risk factors associated with cancer tend to be patterned according to poverty.

"Poverty influences the environments in which people live, and those environments shape the lifestyle decisions that people are able to make. Action to prevent cancer requires concerted effort within and outside the health sector. This action includes specific policies focused on reducing exposure to cancer-causing risk factors, such as tobacco and alcohol use, and access to vaccinations that prevent cancer-causing infections, including hepatitis B and HPV," Sarfati and Gurney wrote.

"The primary prevention of cancer through eradication or mitigation of modifiable risk factors is our best hope of reducing the future burden of cancer," they wrote. "Reducing this burden will improve health and wellbeing, and alleviate the compounding effects on humans and the fiscal resourcing pressure within cancer services and the wider health sector."

Over 365,000 Maritimers still without power in Fiona's wake

Strong winds and heavy rainfall from Fiona have left over 365,000 Maritimers still without power, as of 11 a.m. Sunday.