A quarter of Canadians over the age of 65 are caregivers, StatCan survey reveals 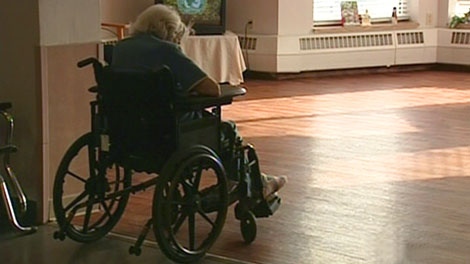 A senior citizen is seen inside a long-term care home in Ontario.

TORONTO -- The newly released results of a Statistics Canada survey are shedding light on the complications that older Canadians face in the caregiving realm, revealing that almost a quarter of Canadians over the age of 65 are also caregivers themselves.

That’s 1.5 million Canadians who give their time to take care of others. And while younger caregivers are often taking care of children or aging parents, a third of these senior caregivers primarily take care of a spouse or life partner.

The survey was conducted in 2018, but in a year where a pandemic has disrupted the lives of older Canadians to a devastating degree, the results released this week take on new significance.

“Not only are seniors more at risk of severe illness, they are also more affected by isolation measures,” the StatCan report stated.

“As a result, many senior caregivers who help people living outside of their household may not have been able to provide the same level of care that they usually do.”

One in five senior caregivers take care of a friend, colleague or neighbour, according to the survey -- something that would’ve become more difficult, or perhaps impossible during the pandemic.

Over the last year, seniors have been a huge focus for health officials and governments, as older Canadians are one of the groups most at risk of severe outcomes or death if they contract COVID-19. But most of this discussion has focused on seniors as receivers of care, overlooking those who are involved in taking care of others as well.

More than 40 per cent of the senior caregivers surveyed said they normally received support in their caregiving from one of their children, with 28 per cent and 23 per cent reporting they received support from extended family or close friends and neighbours.

However, with the pandemic shuttering people within their homes and within small household bubbles, an older couple where one partner primarily takes care of the other would’ve found themselves without that outside support.

Bill VanGorder, Chief Policy Officer at C.A.R.P, an advocacy group that looks out for senior citizens in Canada, told CTVNews.ca in a phone interview that the burden of care for senior caregivers has definitely increased due to the isolation caused by the pandemic.

“I know of cases where people were visited regularly by one or another member of the family, so that a senior who needed some care had a visitor every day of the week to help do the little things that needed to be done around [the house],” VanGorder said.

“Often it's meal preparation, or a little bit of cleaning, or, you know, cutting the lawn, putting out the garbage, all those things that, if they get help, allows older adults to stay in their own homes and not go into the big warehouses that we call a long-term care facilities. But that hasn't been possible because the young people don't want to go near there and risk transmitting COVID to their senior loved ones. So they've just been cut off from that opportunity.”

Although men did take on caregiving at higher percentages in older ages, according to the StatCan survey, senior women spent eight hours a week performing caregiving activities on average, while senior men spent around five hours.

If the primary receiver of care was a spouse, those numbers jumped up, with senior women spending roughly 20 hours a week on care, and senior men spending 14 hours.

A third of senior caregivers taking care of a spouse spent more than 30 hours a week acting in a caregiving role.

VanGorder pointed out that long-term care lockdowns prevented caregivers of all ages from providing extra care to their loved ones.

“Long-term care facilities and places that house older adults have been understaffed for years,” he said. “And part of the care that is given to loved ones and friends by caregivers is extra caregiving within those facilities. And when they are closed down because of COVID, access is restricted.”

During the first wave of lockdowns, many long-term care facilities banned all visitors, including essential family caregivers, in an attempt to protect residents from contracting COVID-19. Although the rules softened to allow caregivers to visit in some regions, it hasn’t been consistent across all jurisdictions, with some provinces leaving that decision up to individual care homes.

In Ontario, where several regions have entered new lockdowns recently, each resident can have two designated caregivers who are permitted to visit during lockdowns.

THE NEED FOR SUPPORT

While providing care to loved ones -- or even to strangers -- is fulfilling for numerous caregivers, it also can come with its own detriments to a caregiver’s health.

These issues will only have gotten worse in 2020, VanGorder said.

When caregivers were asked in the survey what type of support they wished they received, they overwhelmingly pointed to financial support. More than half of senior caregivers highlighted financial assistance from the government as something that would help.

VanGorder believes family caregivers more than deserve the support -- especially during a pandemic.

“The vast majority of home care needs in Canada couldn't be met except for these family caregivers,” he said. “It's estimated $66 billion to $70 billion a year is the value of that caregiving. If it was supplied by government, that's what it would cost: $70 billion a year.”

He explained that family caregivers receive a tax credit in Canada, but that it’s non-refundable, “and only benefits those who pay taxes.

“So if you have to stop working to give care to your loved one, and you're not making any money, the tax credit doesn't do you any good at all, because you have no tax to have a credit against,” he said.

“Those who are most in need of relief, individuals who've given up their employment, receive no benefit at all.”

C.A.R.P has been pushing for this tax credit to become refundable, as well as for a “dropout provision” to be provided to full-time caregivers who have to stop working to provide care. The organization proposed these ideas as recently as this summer, VanGorder said, but the government has shown no signs of taking up their suggestions.

“C.A.R.P is looking for action now, not promises for the future,” he said.

“Seniors and older adults are saying to us, you know, the government's got to start making decisions with us, not just for us.”