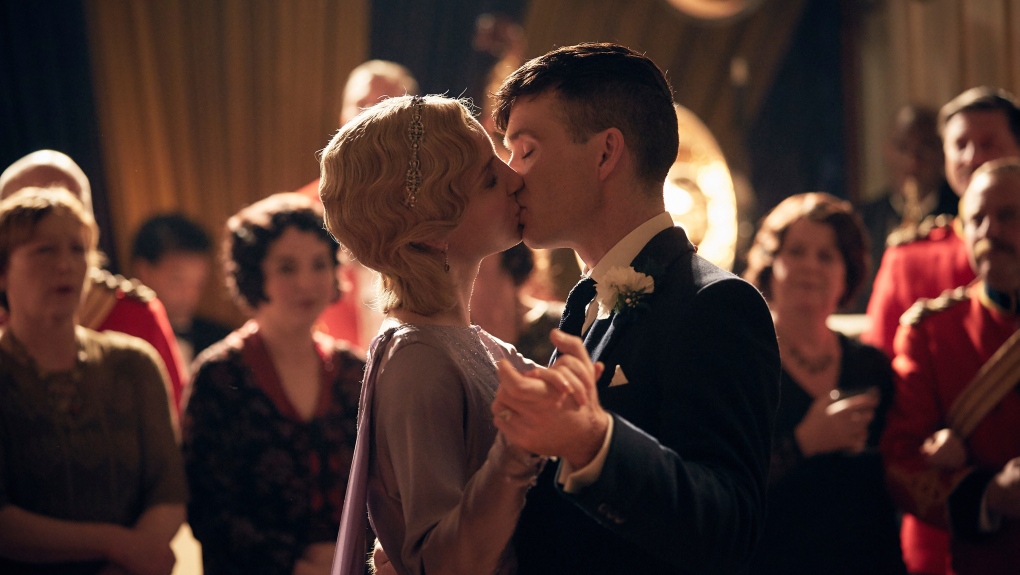 This image released by Netflix shows Annabelle Wallis as Grace, left, Cillian Murphy as Thomas Shelby in a scene from the series "Peaky Blinders." (Robert Viglasky/Netflix via AP)
LONDON -

Steven Knight looks astounded, almost lost for words. He's just watched contemporary dance company Rambert run through scenes from the first act of their "Peaky Blinders" production, based on the hit TV show that he wrote and created.

Watching the immediate connection between the dancers' movements and the audience is a revelation for Knight, who has teamed up for a full-length theatre dance show that fills in some of the 1920s gangster drama's backstory.

"I was never into dance. Dance was never a thing for me. I certainly can't dance myself," Knight says.

He was so impressed with the power of dance that he wrote a ballet scene into the show's fifth season.

Recently Knight watched rehearsals of several scenes of the stage show, "Peaky Blinders: The Redemption of Thomas Shelby," which has its world première at the Birmingham Hippodrome on Tuesday before touring around the U.K.

"I want other people to experience what I experience, which is when you see it, it's like there's no barrier between you and it," explains Knight, who wrote the script for the show.

"It's not like opera, which I'm sure is fantastic, but you don't need to be literate in opera or to understand or know the story or anything. Just human beings doing what they do to music. And it's just astonishingly direct."

"(Knight) said to me, well, you convey an idea in 30 seconds, and when I do it in the series, it takes me hours to convey that idea. So that's the power of dance. Dance for me and for everyone. You don't need to learn the language. It's the body," Pouffer says. "We speak internationally, so it doesn't matter where you're from. You will understand the story."

And that goes for people who have never seen "Peaky Blinders."

"We are starting in a way in First World War, which is not what we see in the series. And that explains why Peaky Blinders, are Peaky Blinders," he says.

Fans of the BBC series will certainly be familiar with the love story at the heart of the production between crime boss Tommy Shelby and undercover spy Grace Burgess, portrayed on television by Cillian Murphy and Annabelle Wallis.

"Tommy's life is difficult. He makes a rod for his own back. He causes his own problems, of course. He's very conflicted, he's all of those things that he is in the TV show," says Knight.

"But I think with dance – maybe that you don't see in other forms – is the joy, when there is joy, you see the joy of it. But also even in the tragedy, you see the beauty of it. So it's a really interesting way of telling the story."

Tommy and Grace are being played by two different sets of dancers, with one of the couples, Guillaume Queau and Naya Lovell, well aware of their responsibility to the "Peaky Blinders" fan base.

"If the fans watch the show maybe they have certain expectations about what the personas should look like as Grace or Tommy Shelby and I feel this creates also an opportunity to find a middle ground between dance and Benoit's vision and Rambert's vision and `Peaky Blinders'," says Queau.

After the war, the Peaky Blinders run Birmingham their own way, with torture, shooting and stabbing as frequent methods of persuasion.

This violence is steeped into the movements of the dancers.

"I was thinking, please stop because you're going to hurt each other because it's real.

"You feel the conflict and the violence quite strongly in the form of dance," says Knight. "That was another revelation to me, the way that that a fight scene can be beautiful and choreographed and yet really quite full on."

Senators have voted to ask Gov. Gen. Mary Simon to have their former colleague Don Meredith stripped of his "Honourable" title.