Scientists have found the new scariest movie of all time 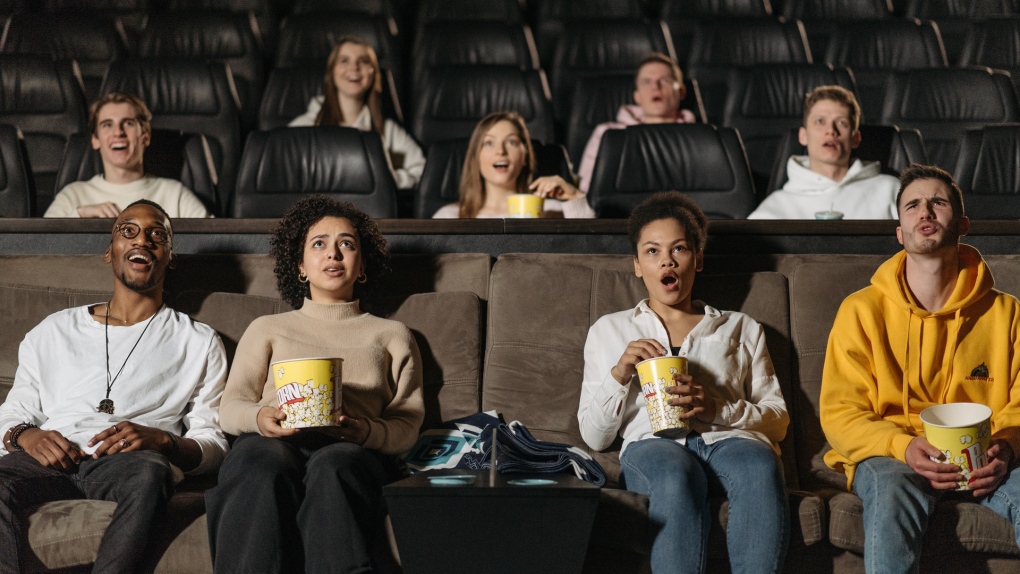 People react while watching a film in a movie theatre. (Pexels)

TORONTO -- An annual study monitoring the heart rates of viewers claims to have found the scariest movie of all time, with independent horror flick "Host" beating out 2020's winner "Sinister."

Conducted by consumer comparison website BroadbandChoices.co.uk, the Science of Scare Project works to categorically find the scariest movies in existence based on what gets viewers' hearts pumping.

The project, which first debuted in 2020, had 250 people from a range of ages outfitted with heart rate monitors to watch 40 scary movies in "screaming rooms" while under medical and researcher supervision.

According to the study, the participants watched more than 120 hours of "best" horror films, as determined by critics' lists and Reddit forums, over the course of several weeks.

Dan Clifford, who funded the study, measured the viewers' average resting heart rate of 64 beats per minute (BPM) against their average increased heart rate during different films and calculated the difference to come up with the winner.

The study found that "Host," a low budget movie shot entirely on Zoom during the COVID-19 pandemic, was found "scientifically to be the scariest film of all."

According to the findings, director Rob Savage's "Host" sent audience heart rates as high as 130 BPM -- the equivalent of jogging -- at the film's scariest moment, beating 2020’s winner, "Sinister." The film tells the story of a group of friends who take part in a "virtual séance" during one of their pandemic video catch-ups.

The study noted that audiences overall experienced a 37 per cent increase in heart rate of 88 BPM when watching the movie.

"Sinister" came second on this year's scariest movies list, followed by "Insidious," "The Conjuring" and then "Hereditary" to round out the top five.

"Host" was one of seven new entries to the Science of Scare Project's scariest movies list, with John Krasinky’s "A Quiet Place Part 2", Jordan Peele and Nia Dacosta's "Candyman," "The Invisible Man" and "The Conjuring: The Devil Made Me Do It" also securing spots on the list.

However, the new additions mean some iconic horror films from 2020's list didn't make the cut, including "The Thing," "The Witch," "Scream," "The Orphanage" and "Annabelle" which failed to break into the top 30.

The study reported that "Insidious" gave audiences the biggest fright by inducing the highest spike in average heart rate at 133 BPM. "The Conjuring," "Host," "Sinister" and "A Quiet Place Part 2" also ranked highly in this category.

According to the findings, modern scary movies performed better than classic horror films, with "Nightmare on Elm Street," "Halloween" and "The Texas Chainsaw Massacre" being the only movies over two decades old to appear in the top 20.