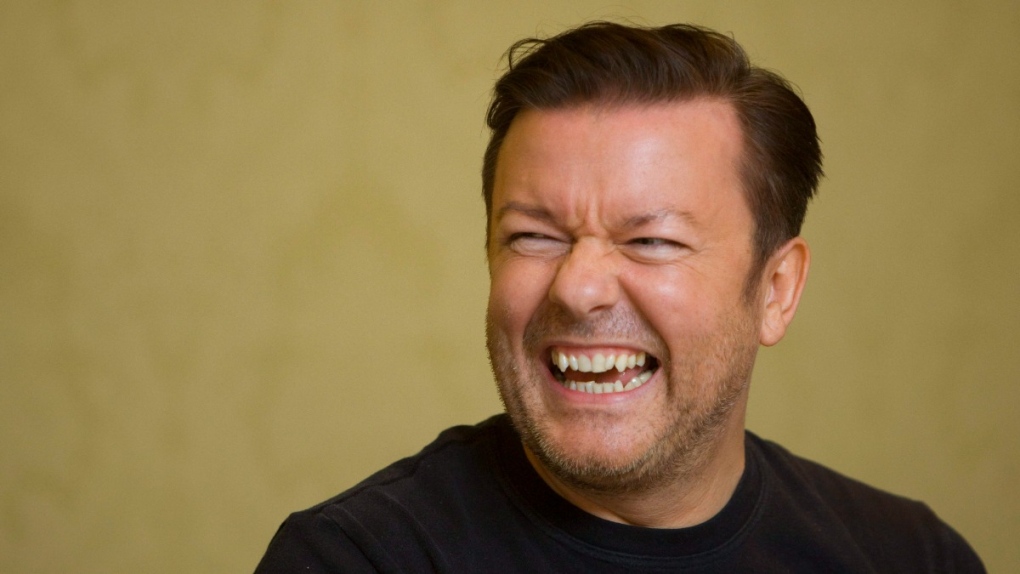 Ricky Gervais during a press conference at the Toronto International Film Festival, on Sept. 14, 2009. (Sean Kilpatrick / THE CANADIAN PRESS)

A week before the start of Pride Month, comedian Ricky Gervais is being criticized for his new stand-up special, in which he mocks transgender women and the debate around bathroom access.

A few minutes into the set, Gervais describes reading a comment from somebody calling him "as funny as a fart at a baby's funeral," and transitions to a joke about women. From there, he clarifies: "The old-fashioned women, the ones with wombs."

He goes on to reference debates about bathroom access.

"And now the old-fashioned ones say, 'Oh, they want to use our toilets.' 'Why shouldn't they use your toilets?' 'For ladies!' 'They are ladies -- look at their pronouns! What about this person isn't a lady?' 'Well, his penis.' 'Her penis, you f***ing bigot!'"

Gervais shares his thoughts on cancel culture, calling it "virtue-signalling." Later in the special, the comedian says he supports transgender rights in real life but makes fun of the topic because he makes fun of everything.

"Trans rights are human rights. Live your best life. Use your preferred pronouns. Be the gender that you feel that you are," he says. "But meet me halfway, ladies. Lose the c**k."

Both Gervais and Netflix were met with backlash online within hours of the special's release, with some calling out Gervais' remarks for being transphobic and the streaming giant for giving them a platform.

"(SuperNature is) full of graphic, dangerous, anti-trans rants masquerading as jokes. He also spouts anti-gay rhetoric & spreads inaccurate information about HIV," LGBTQ media advocacy organization GLAAD wrote on Twitter, adding that Netflix was going against its own policy of not allowing content "designed to incite hate or violence."

Netflix did not immediately respond to CNN's request for comment.

Gervais has been described as an "equal-opportunity offender," a comedian with a previous history of polarizing jokes. And it's not the first time Netflix has been criticized for giving a platform to transphobic views. Dave Chappelle has made jokes about transgender people in multiple Netflix specials, most recently in late 2021, when he made explicit jokes about the bodies of transgender women in his special "The Closer."

Multiple trans rights advocates, including some Netflix employees, and civil rights organizations at the time called on the company to take Chappelle's special down.

In a description about its organizational culture, Netflix lays out the company's position on artistic expression.

"Not everyone will like -- or agree with -- everything on our service," reads a statement on the company's website. "While every title is different, we approach them based on the same set of principles: we support the artistic expression of the creators we choose to work with; we program for a diversity of audiences and tastes; and we let viewers decide what's appropriate for them, versus having Netflix censor specific artists or voices."

Russia strikes Kyiv as troops consolidate gains in the east

As Senate-confirmed justices end Roe, how will voters react?

Republicans are heading into a November midterm election that is poised to swiftly become a referendum on the court's decision to overturn Roe v. Wade, as voters decide which party should control Congress