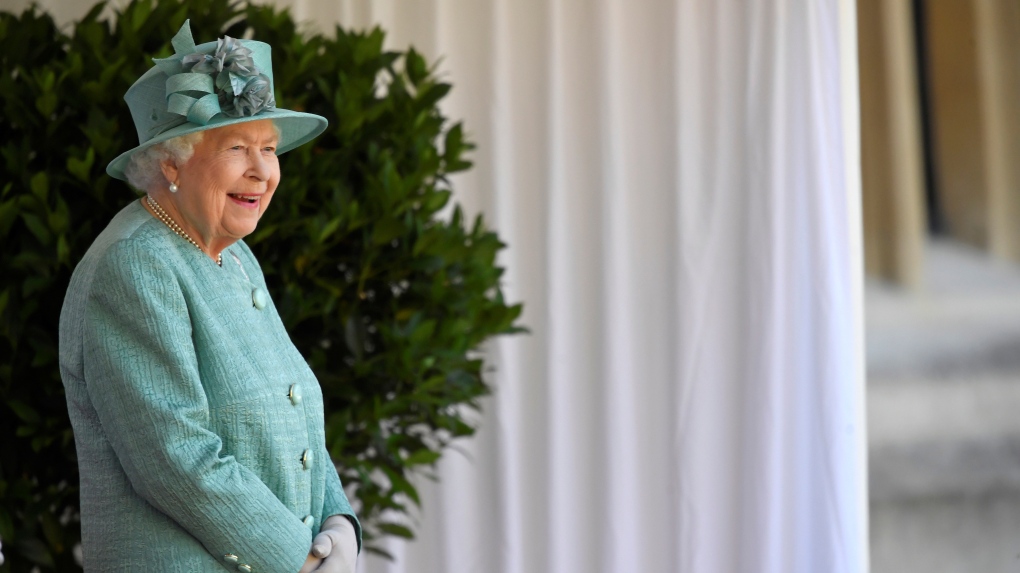 Queen Elizabeth II looks out during a ceremony to mark her official birthday at Windsor Castle in Windsor, England, Saturday June 13, 2020. (Toby Melville/Pool via AP)

LONDON -- Queen Elizabeth II has used her birthday honours list to celebrate those at the forefront of the U.K.'s rapid rollout of COVID-19 vaccines over the past few months, which has been credited with turning around the country's pandemic response.

Two of the most high-profile women in the vaccination drive, Professor Sarah Gilbert of the University of Oxford and venture capitalist Kate Bingham, the former head of the U.K. Vaccines Taskforce, have been recognized with damehoods in the list published late Friday.

Gilbert was instrumental in the development of the vaccine being manufactured by pharmaceutical company AstraZeneca, while Bingham has been widely lauded for the country's successful vaccine procurement program.

Though the U.K. has seen Europe's highest virus-related death toll, with nearly 128,000 people having lost their lives, the vaccination program has been deemed as one of the world's speediest and most coherent rollouts.

In December, a 90-year-old British grandmother became the first person in the world to be given the Pfizer vaccine outside of a trial. Since then, around 61 per cent of the U.K. population has received at least one dose of vaccine, while about 43 per cent has had two. The rollout, which has primarily been based on age, was earlier this week extended to 25-29-year-olds.

Also honoured are a multitude of specialists from across the scientific community for their efforts in developing vaccines, running clinical trials, delivering testing and tracking coronavirus infections. The selfless work of people to help others during the pandemic, from running free taxis for key workers to making bottles of hand sanitizer, was also recognized by the 95-year-old monarch.

Of the 1,129 people receiving honours, 62 per cent are being recognized for community work, with nearly a quarter recommended for their activities during the pandemic.

One of those was 25-year-old Rhys Mallows, who was awarded a British Empire Medal for helping to repurpose Mallows Bottling, a Welsh firm, to produce more than one million bottles of hand sanitizer following a deal with a Scottish distiller. He estimates that around 81 million hands have been sanitized.

"We're not scientists, but we really felt that if we can give people little bullets to protect themselves, then it'd make a big difference," he said.

Siblings John Brownhill and Amanda Guest were also awarded the British Empire Medal for setting up Food4Heroes, which delivered more than 200,000 meals to the National Health Service.

"You see in a time of crisis the strengths of humanity I think", Brownhill said.

The honours list is also a record-breaking one in terms of diversity, with 15 per cent of recipients from an ethnic minority background. Meanwhile, nine per cent of those honored had a disability and five per cent identified as LGBT. More women, 50.2 per cent, than men feature on the list, for the first time since 2015.

The winners are chosen by civil servants' committees based on nominations from the government and the public. The awards are usually given out by the queen or a senior royal acting in her place during investitures at Buckingham Palace, but the pandemic has changed all that, not least because the queen has been living at Windsor Castle.

The honours list also celebrates the achievements of people in the limelight.

In the world of sport, Manchester City footballer Raheem Sterling was awarded an MBE, beoming a member of the Most Excellent Order of the British Empire for his efforts to promote racial equality in sport.

His award coincides with the start of the European Championship, in which Sterling is set to feature for England. In matches ahead of the tournament, England players have been booed by fans for taking the knee as a gesture against intolerance

England's former coach, Roy Hodgson, and ex-tennis star and broadcaster Sue Barker were both awarded a CBE, which makes them Commanders of the Order of the British Empire

In the world of entertainment, actor Jonathan Pryce, who will play the queen's late husband Prince Philip in the final seasons of Netflix's royal drama The Crown, was knighted. And veteran performer Engelbert Humperdinck was also awarded an MBE for services to music.

"That the U.K. continues to honour those that work in the arts acknowledges the great contribution artists make to the way we live our lives," Pryce said.

Lulu, the veteran singer, was also awarded a CBE alongside keyboardist and songwriter Rick Wakeman, whose career has seen him collaborate with a varied bunch -- from David Bowie to Black Sabbath.

The youngest recipient was 21-year-old Amika George, founder of the FreePeriods campaign, who was made an MBE for services to education after campaigning against period poverty.

Among the oldest recipients was 95-year-old Sylvia McKeegan, who was honoured with a BEM for her decades of support for the elderly, new mothers, and children in Londonderry, Northern Ireland.