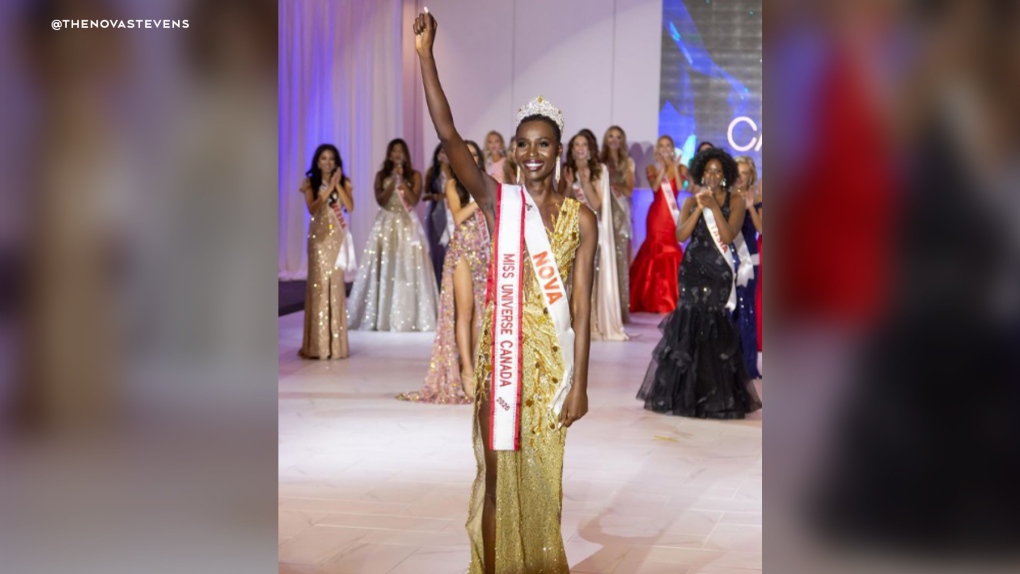 TORONTO -- Miss Universe Canada 2020 Nova Stevens, the first Black woman to ever hold the title in Canada, has called out racist remarks she has been receiving online.

On Tuesday, Stevens posted a photo of herself superimposed with negative comments from social media.

"With all that has been going on in the world, 'black lives matter,' 'Asians are human,' you would think this would bring us together. Instead, it looks like some people are still stuck in their ignorant and racist ideologies,” Stevens wrote in her Instagram caption.

Stevens said she was "really disappointed with some pageant fans from certain countries." The majority of the negative comments in her photo were in Tagalog, the national language of the Philippines.

"No one is saying you have to support all contestants, all we’re saying is that you support your delegate without bringing others down," Stevens said in part. "You don’t need to dim someone’s light in order for you to shine."

Stevens later updated a portion of the photo caption to say that her response was "not a generalization" of Filipino fans as she was unsure of the language the comments were in until after she called them out.

"In case it’s not clear. I don’t think all Filipinos are racist. That would be ridiculous to say," Stevens wrote.

Stevens said she was aware that "there are multiple countries that think this way,” and says she shared the post as a "teaching moment so that we can make pageants fun and enjoyable for all."

"Cheer for your girls with love and respect for the other delegates because they too are deserving of the 'Miss Universe' crown. Spread love not hate," she wrote.

Stevens will represent Canada as the first Black woman to ever hold the title, at the Miss Universe pageant being held in Florida on May 16.

In a follow-up Instagram post on Wednesday, Stevens shared another photo of herself, this time superimposed with positive comments.

"Let's end things on a positive note. To my Filipino fans: I’m sorry if my previous post caused you any harm," Stevens wrote in the caption.

"My post wasn’t intended to incite more hate; rather shed light on the toxicity that sometimes hails from fans (from all over the world)," she added.

Justine Abigail Yu, a Filipina-Canadian magazine editor in Toronto who runs writing workshops for racialized communities to share their experiences of living in between cultures, told CTVNews.ca that anti-Blackness is "unfortunately a deep-seated issue in the Philippines" that extends to diasporic communities around the world.

Yu explained in an email on Wednesday that this issue is rooted in the Philippine's own history of colonization.

"That has engrained this mentality (often without even realizing it) that our colonizers are superior to us and that we should aspire to their whiteness. The comments that Ms. Stevens received and called out are absolutely repugnant, but they are also not surprising to me," Yu said.

Yu, who has experienced racist attacks herself, said she grew up hearing damaging comments like those that were directed at Stevens.

What is even more disheartening, Yu said, was that Stevens was later "accused of racism for speaking up about the harm that is being done to her."

"We have a lot of work to do to break free from this system of white supremacy that oppresses not just Black people, but each and every single one of us," Yu said.

Stevens told CTVNews.ca on Thursday that the amount of racism she has experienced online has increased since becoming Miss Universe Canada.

"Because more people know who I am, they therefore feel as though they have more access to me," Stevens said in a telephone interview.

While she tries not to pay attention to the negative comments she receives, Stevens said she reached a breaking point on Tuesday and took to social media to address the issue.

"The reason why I posted that photo was because I was getting so many of them, like every day this week," Stevens said, adding that her goal was to educate others.

"The people who may have these ideologies that are backwards, you have to tell them that what they're doing is wrong, because if you don't tell them how would they know and how would they change?" she said.

Stevens said that she is not the only one in the pageant world who has dealt with discrimination and hopes that sharing her experience will raise more awareness.

"By choosing to be silent you're condoning that behaviour so you have to speak up," Stevens said. "I want pageants to be fun. I don't want these girls, not only myself, to experience hate."