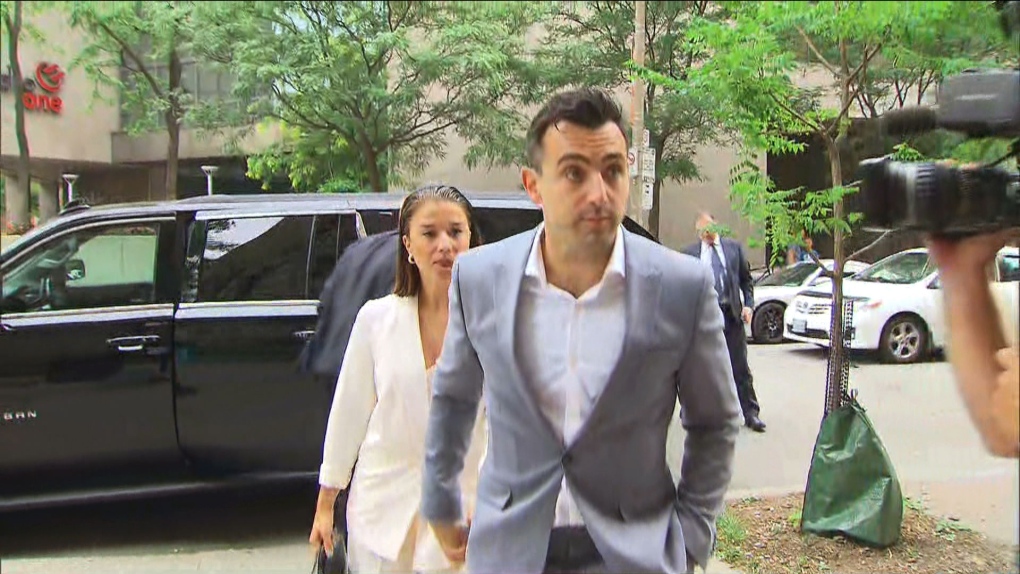 Jacob Hoggard is seen at a Toronto courthouse on July 11, 2019 with his wife. (CTV News Toronto)

TORONTO -- Jacob Hoggard, the frontman for the Canadian rock band Hedley, is scheduled to stand trial on three sex-related charges next year.

The trial is set to begin in a downtown Toronto courthouse on Jan. 4, 2021.

That will be more than two years after the singer was arrested in connection with alleged incidents involving a woman and a teenager.

He also opted to be tried by a jury rather than a judge alone.

The case was given the green light to proceed to trial last summer after the preliminary hearing during which prosecutors gave an overview of their evidence.

That evidence cannot be published due to a publication ban meant to protect the accused's right to a fair trial. A separate publication ban also bars identifying the complainants.

Hoggard was arrested and charged in the summer of 2018 after allegations of sexual misconduct surfaced, suggesting inappropriate encounters with young fans. Toronto police have said the charges relate to three separate incidents involving a woman and a girl under the age of 16 that allegedly occurred in the Toronto area in 2016.

Hoggard issued a statement in February 2018 in which he denied engaging in non-consensual sexual behaviour, but acknowledged having behaved in a way that "objectified women" and being "reckless and dismissive of their feelings."

He also said on Twitter that he understood the "significant harm" his actions had caused and was "truly sorry."

Hedley has been on an indefinite hiatus since March 2018, playing its last show in Kelowna, B.C. The band, which is based in Vancouver, was also dropped by its management team and banned by multiple radio stations in the wake of the allegations.

Some of the early hearings in the case were attended by fans of the band even when Hoggard himself was not present.

The next hearing in the case is scheduled for Jan. 14.

This report by The Canadian Press was first published on Jan. 8, 2020.