Golden Globes a 'watershed' moment for Asian inclusion in Hollywood

Sandra Oh’s headline-grabbing appearance at the 2019 Golden Globe Awards is being described as a “watershed” moment for Asians in Hollywood.

When Oh, a Korean-Canadian actor, co-hosted the Golden Globes on Sunday alongside American actor Andy Samberg, she became the first person of Asian descent to host a major U.S. awards show.

At the Beverly Hills event, Oh also publicly celebrated the diversity of the nominated casts.

“I wanted to be here to look out on this audience and witness this moment of change,” Oh told the audience after a zinger-filled opener. “I am not fooling myself. Next year could be different. But right now this moment is real.”

Shortly after, Oh even won best actress in a TV drama for “Killing Eve.” In her emotional acceptance speech, she told her parents that she loved them in Korean.

“It was the first time, I think, since 1981 that an Asian woman won in that category,” Tang said. “And then just the fact that she got to acknowledge her parents… in her native Korean and sort of acknowledge that side of her -- you don’t see that that often just because there aren’t that many Asian nominees. That seems to be sporadic over the years but I think that’s going to change.”

When Oh gave a bow to her ecstatic parents, Tang added that “a lot of Asian-Americans (and) Asian-Canadians who were watching probably saw their parents in that too and so there was that sense of pride of representation.”

Although it netted no awards on Sunday, the film “Crazy Rich Asians” had received two nominations, which Tang called a “big boost” for Asians in Hollywood.

“The last time that an all Asian-led film got major nominations… was 1962, when ‘Flower Drum Song’ was nominated,” Tang explained. “And this time it’s also just different because this was a movie that was directed by an Asian-American and one of the screenwriters was Asian-American and (it) was based on a book by an Asian author. So the fact that it was behind-the-scenes as well… was a big deal.”

During the Golden Globes, Oh even cracked a joke about Hollywood whitewashing, saying at one point that “Crazy Rich Asians” was “the first studio film with an Asian-American lead since 'Ghost in the Shell' and 'Aloha.’”

The latter’s female lead, Emma Stone, a Caucasian actor who controversially portrayed a person of mixed Asian, Hawaiian and American ancestry in the 2015 film, could then be heard shouting “I’m sorry!” from audience, to which Oh crossed her hands over heart and looked at Stone to acknowledge the apology.

Cast members from “Kim’s Convenience” -- a Canadian sitcom that follows a convenience store owning Korean-Canadian family -- joined CTV’s Your Morning on Monday to promote their third season and talk about the Golden Globes.

Jean Yoon, who plays the family matriarch on the show, called Oh’s “little reference to the whole whitewashing controversy” and Stone’s response “so perfect.”

“It’s like OK, we’ve gotten past… it,” Yoon said of the whitewashing debate. “They’re creating and Sandra Oh is there, you know, doing her work and getting her just rewards.”

As for Oh’s night, Yoon said that “she just totally killed it as a hostess, but then to see her win was so satisfying.”

“What I really love too is the fact that she’s actually using her position to use her voice as well,” Paul Sun-Hyung Lee, who portrays Yoon’s husband on the show, added. “People are listening to her, she’s in focus and she’s using her powers for good in a sense, right? Like, she’s being very, very supportive of a community that has been unsupported and without a voice for so long. And to have that sort of a stage and to take advantage of that in order to express something is a tremendous boon for all of us, so it’s very much appreciated.”

“I think it’s all of our goals, certainly for me one day to be on that stage to be able to thank my parents as well,” he said.

Similar sentiments are being expressed across the entertainment industry.

“I’ve talked to a couple people who’ve been around in the business for a while, Asian-Americans, and I think there’s a bit of a sense of envy because they think it’s a real interesting and watershed time,” Tang said. “In one way, they wish that they had that when they were younger. So I think it’s going to mean more people pursuing not just onscreen pursuits, but behind the camera too.” 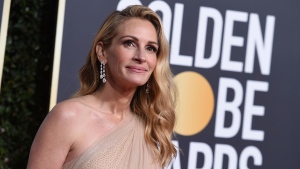 Golden Globes a 'watershed' moment for Asian inclusion in Hollywood

After a tame Golden Globes, is a less-charged awards season ahead?

Alfonso Cuaron and his film 'Roma' win at Golden Globes

Stars returned to looks in colour on the Golden Globes carpet