Bastille invites listeners to escape in 'Give Me The Future' 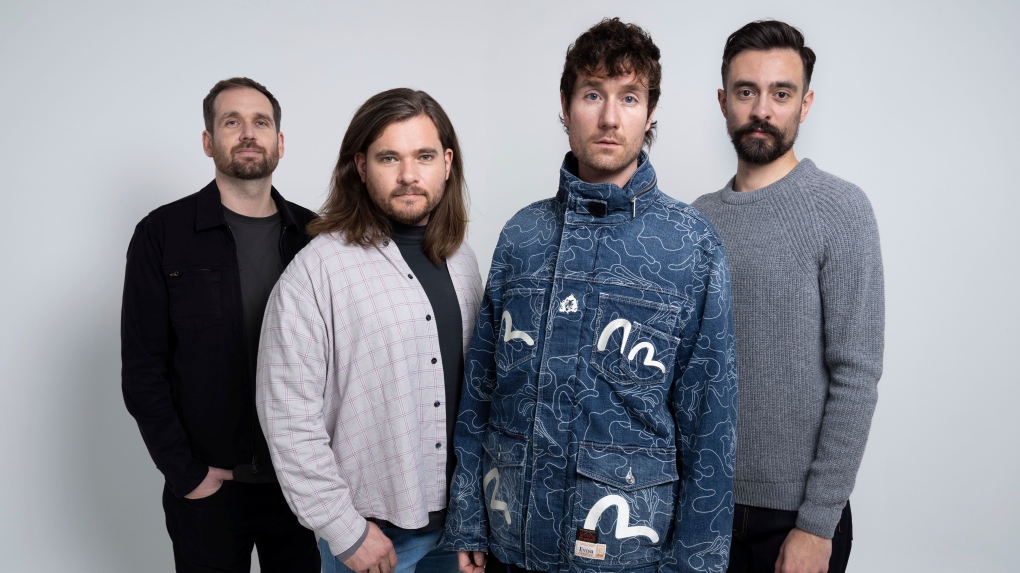 Will Farquarson, from left, Chris Wood, Dan Smith and Kyle Simmons of Bastille pose for a portrait to promote the album "Give Me the Future" on Jan. 5, 2022 in London. (Photo by Scott Garfitt/AP)
NEW YORK -

In 2020, Bastille found themselves in a unique position. Coming out of their last album and into the pandemic, the English pop rock band not only had one album's worth of songs, but two or three.

So they enlisted the help of producer and OneRepublic front man Ryan Tedder to narrow down the tracks. The songs Tedder picked were futuristic leaning and a concept album began to take shape. With techno beats, '80s retro futuristic tones and sweeping production, Bastille's 13-track "Give Me the Future" dives into the world of science-fiction, exploring the way technology can be a tool for escape.

This is the world Bastille creates on their fourth LP.

"In deciding that it was sci-fi, it was really liberating," said frontman Dan Smith. "It's probably the only time we're going to use these kind of sounds, so let us fully go there, have loads of fun with it, push it further than maybe even we're comfortable and hopefully make something that's all the more interesting for it."

The band had some of these ideas floating around before the pandemic and COVID-19 lockdowns only propelled the themes' relevancy. Writing sessions happened over Zoom and recording was virtual, with keyboardist and background vocalist Kyle Simmons creating a makeshift vocal booth with duvet covers, Chris "Woody" Wood recording drum parts from his shed and guitarist Will Farquarson learning how to improve his home recording chops.

Even when there was studio time, no one was ever in the same room.

"I think looking back at our career, it will feel like the most fitting setting for an album like that," said Smith.

As the days in lockdown increased so too did the appeal of escapism.

"Feeling like if this is life/I'm choosing fiction," sings Smith on the opening track, "Distorted Light Beam." In "Thelma + Louise" he sings, "Days like these you want to get away/Close our eyes pretend we're miles away."

"We were really drawn to this sort of sci-fi, tech-leaning stuff about escapism, I think just because of the world that we all lived through the last year or so," said Smith.

"Give Me the Future" isn't Bastille's first go at a concept album. Their last one, "Doom Days," was as well. In fact, Smith says he likes the parameters a concept album gives him when he's writing.

"There's always a sense of autobiography in our work, but I always find it much more fun and interesting to write about the things that I'm obsessed with at that point," said Smith. "It becomes a mix of sort of our lives and like a research project."

In creating "Give Me the Future," Smith not only relied on classic science fiction influences like "1984," "The Matrix," "Total Recall," Aldous Huxley's "Island," "Minority Report" and "The Handmaid's Tale," but also Afrofuturism, escapist films like "Thelma and Louise" and art from Keith Haring. Musically, he drew from artists like Daft Punk, Genesis, Paul Simon and Quincy Jones. The album even includes spoken word poetry from British actor Riz Ahmed.

Beyond the tracks themselves, Smith wanted the visual world of "Give Me the Future" to create a powerful impact. He says that Bastille sees the videos, artwork and songs as an opportunity to build a world around the music.

There's the animated video-game dreamscape of the "Thelma + Louise" video, and in "Distorted Light Beam" there's a VR escape from reality. Smith made his directorial debut with "No Bad Days," a video which sees his character desperate to bring a lover back to life through an android.

"I found myself embarrassingly wanting to show it to people, which also awkwardly happens to feature quite a lot of me," said Smith. "So that's like forcing someone to sit down and watch three minutes of you acting badly."

Though the sci-fi genre often focuses on the dark side of technology, Smith says he wanted to balance the good and the bad on the album.

"Whenever talking about topics that are bigger than just my life or your own life, it's important to not be too judgmental and preachy about it because no one really wants to be preached to in music," he said.

He recognizes the benefits of technology, from escape to community to giving people a voice. And he concedes that he'd be the "biggest hypocrite in the world" if his songs passed judgement on phone addiction, for example: "I can acknowledge that I should probably spend a significantly less amount of time on my phone."

Ultimately, he wanted to create a pop-friendly dance album, evoking the feeling of a party scene in the 1980s and '90s in America. "Hopefully underneath all that," he said. "It's just a load of (expletive) banging tunes."