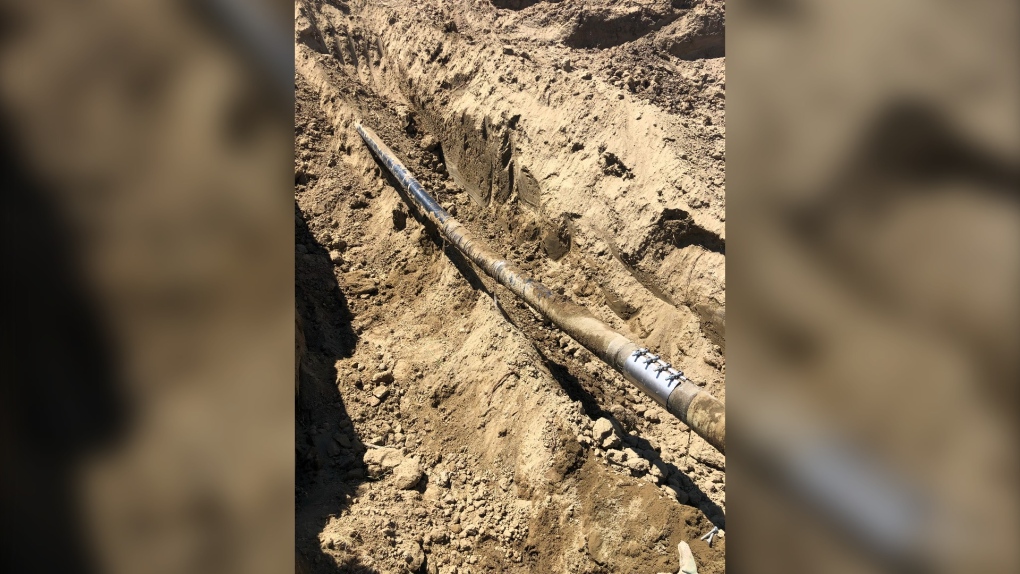 This undated photo provided by Bridge Pipeline shows repairs made to a six-inch pipeline transporting diesel that broke and spilled more than 45,000 gallons of fuel on July 27, 2022. near Sussex, Wyo. The line is owned by a Wyoming company that's being sued by federal prosecutors over previous spills in two other states. (Bridge Pipeline via AP)
BILLINGS, Mont. -

A diesel pipeline in Wyoming owned by a company that's being sued by federal prosecutors over previous spills in two other states cracked open and released more than 45,000 gallons (205,000 litres) of fuel, a state official said Friday.

Cleanup work is ongoing from the spill that was discovered by the pipeline's operator on July 27, said Joe Hunter, Emergency Response Coordinator with the Wyoming Department of Environmental Quality. The fuel spilled on private ranchland near the small community of Sussex in eastern Wyoming, he said.

Contaminated soil was being excavated and placed into a temporary staging area, and it will be spread onto a nearby dirt road where the fuel is expected to largely evaporate, Hunter said.

The line is operated by Bridger Pipeline, a subsidiary of Casper-based True companies, according to an accident report submitted to the U.S. Coast Guard's National Response Center.

The company initially reported only 420 gallons (1,590 litres) had spilled, but later revised its estimate to 45,150 gallons (205,250 litres), according to a National Response Center database.

Bridger Pipeline spokesperson Bill Salvin said the initial figure was based on what company personnel saw on the ground and reported immediately. The volume estimate increased as the site was excavated, he said.

True and its subsidiaries have a long history of spills. In May, federal prosecutors in Montana alleged that representatives of Bridger Pipeline had concealed from regulators problems with a pipeline that broke beneath the Yellowstone River near the city of Glendive in 2015. The break spewed more than 50,000 gallons (240,000 litres) of crude into the river and fouled Glendive's drinking water supply.

In North Dakota, federal prosecutors and the state Attorney General's Office are pursuing parallel claims of environmental violations against a second True companies subsidiary responsible for a 2016 spill that released more than 600,000 gallons (2.7 million litres) of crude, contaminating the Little Missouri River and a tributary.

Representatives of the companies have denied violating pollution laws and rejected claims that problems with the Montana line were concealed from federal regulators.

The Wyoming spill was caused by a crack at a weld in the line, said Hunter, who did not know how long it was leaking before being discovered. The spilled fuel did not appear to reach any waterways and no enforcement actions for environmental violations were planned, he said.

"I'm not saying there wouldn't be any down the road but for right now there won't be" any enforcement actions by the state, Hunter said. "It's an older pipeline and it's one of those things that happen."

The 6-inch (15 centimetre) diameter steel line was installed in 1968 by the original owner and later acquired by Bridger Pipeline, Salvin said. It was last inspected in 2019, using a device that travels inside the pipe looking for flaws, and no problems were detected, he said.

"We're focused on minimizing the environmental impact and we're going to replace the soil and restore the land as close as possible to its original condition," Salvin said.

Kenneth Clarkson with the Pipeline Safety Trust, a Bellingham, Washington-based group that advocates for safer pipelines, said a thorough investigation into the spill's cause needs to conducted.

"It's frustrating to hear of another spill by Bridger Pipeline LLC," Clarkson said. "This spill of 45,000-plus gallons of diesel into rural Wyoming negatively impacts the environment, wildlife, and surrounding communities."

Violations of pipeline safety regulations would be handled separately and fall under jurisdiction of the Pipeline and Hazardous Materials Safety Administration, part of the U.S. Department of Transportation. Salvin said the agency has been notified about the spill, but officials did not immediately respond to questions from The Associated Press.

Bridger last year reached a $2 million settlement with the federal government and Montana over damages from the Yellowstone River spill. The company was previously fined $1 million in the case by the Montana Department of Environmental Quality.

Over 365,000 Maritimers still without power in Fiona's wake

Strong winds and heavy rainfall from Fiona have left over 365,000 Maritimers still without power, as of 11 a.m. Sunday.