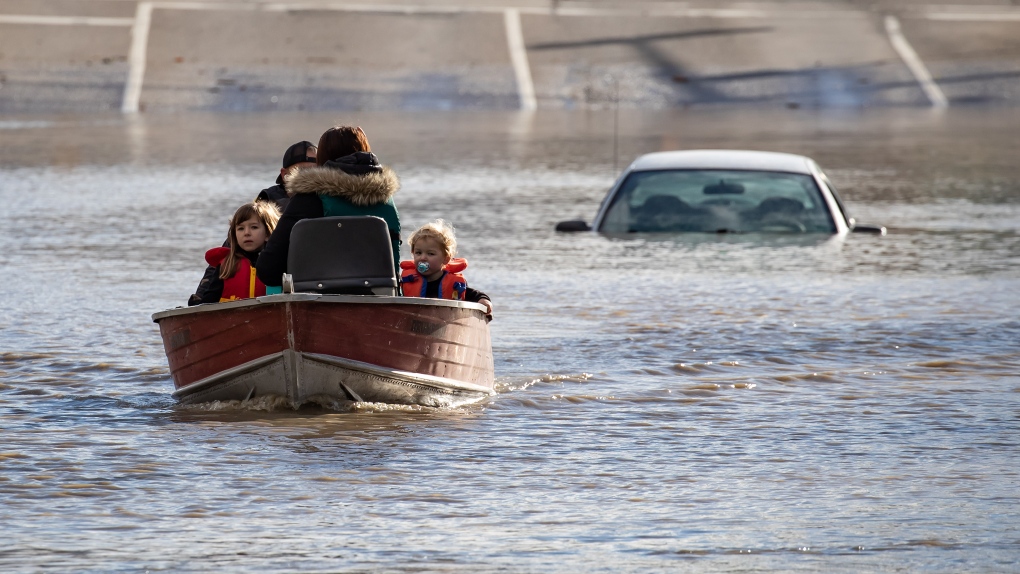 A woman and children who were stranded by high water due to flooding are rescued by a volunteer operating a boat in Abbotsford, B.C., on Tuesday, November 16, 2021. THE CANADIAN PRESS/Darryl Dyck
OTTAWA -

A task force made up of government leaders and representatives from the Insurance Bureau of Canada is expected to release a final report on the program later this spring after two years of work.

At a regularly scheduled meeting between the ministers Thursday, the focus was mainly on climate change mitigation following a year of heat waves, wildfires and flooding across the country.

British Columbia was hit particularly hard in 2021. The provincial coroner's service said 595 people died during an extended heat dome last summer. At least 15,000 people were displaced during record flooding in November, and the two events combined are believed to have killed 1.3 million farm animals.

On Monday, federal Emergency Preparedness Minister Bill Blair finished a tour of B.C. communities that experienced those devastating floods, where some people still have not been able to move home.

The minister didn't provide details about how the national flood insurance program would be structured and his office would not confirm what the federal government expects its involvement to entail. But he did say it's expected to reduce immediate disaster relief costs.

"In many cases, people who have built in those areas or reside in those areas are unable to get any form of overland flood insurance, which can significantly add to the cost of recovery," Blair said.

The frequency, severity and cleanup costs of natural disasters are rising due to climate change, Blair said, and communities will need to make difficult decisions about where to rebuild in the future.

"I understand the frustration," he said.

Those decisions will soon be guided by a portal that will allow people to see detailed, updated flood mapping of the entire country, based on data that is currently being compiled by Natural Resources Canada.

In its latest budget released on Feb. 22, the B.C. government promised billions in disaster funding, including $1.1 billion earmarked for recovery costs over the next three years.

The federal government set aside $5 billion this fiscal year for its share of costs under the Disaster Financial Assistance Arrangements to help B.C.'s flood recovery.

Blair said he has also agreed to review the disaster assistance program with an aim to incentivize prevention and mitigation of natural disasters, in addition to helping rebuild.

"Just building back to the way things were before is not satisfactory and there needs to be a greater investment to ensure that when we rebuild, it's done in recognition of the increasing threat of climate change."

This report by The Canadian Press was first published March 17, 2022.