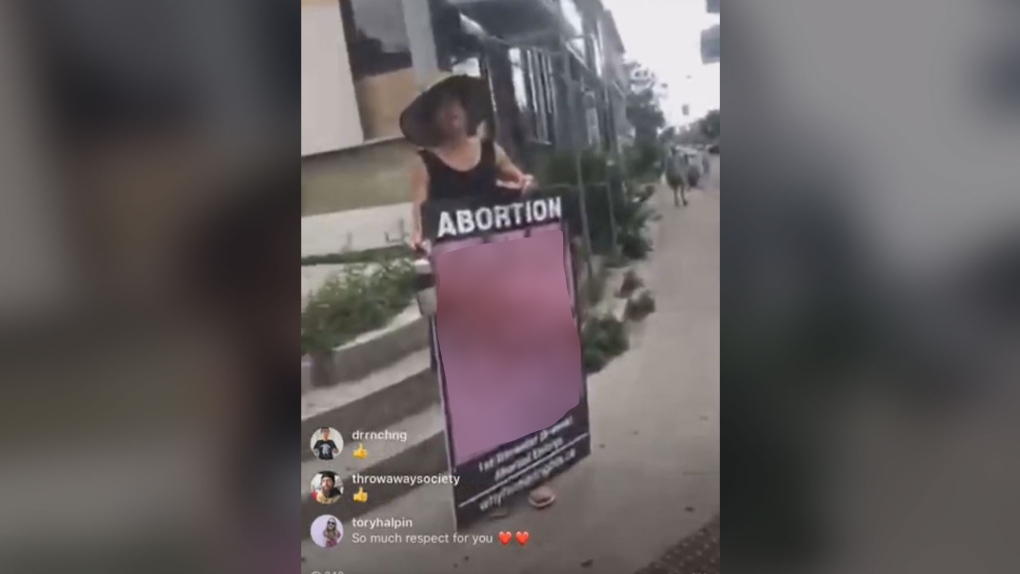 In this screenshot from a live video posted on Instagram by Apiecalypse Now! owner Jennifer Bundock, an anti-abortion protester holds a graphic sign. (Instagram/apiecalypsejen)

Warning: Video contains images and language that some readers may find offensive

When a group of anti-abortion protesters brandishing graphic posters gathered outside Jennifer Bundock’s vegan pizza shop, she knew what she had to do.

In an expletive-laden video that has been shared more than 3,000 times on Facebook, Bundock films her angry encounter with those holding the signs, eventually forcing them to leave the block.

“Move along, I own this restaurant,” Bundock begins calmly as she approaches the group on Bloor Street West near Toronto’s Christie Pits park on July 13. “You don’t stand here in front of my business with this bull****.”

Bundock, 34, is a feminist activist and the owner of the small vegan pizza chain Apiecalypse Now! She’s no stranger to activism, having participated in protests and demonstrations in support of animal rights, immigration rights and women’s rights.

So when she was warned about the protesters by her staff, Bundock took out her phone and started live-streaming on Instagram.

“My objective in those situations is to make the people standing there as uncomfortable as they’ve made me,” she told CTVNews.ca, referring to the dramatic signs that she said can be “re-traumatizing” for people who’ve had abortions.

Her yelling distracts people from the signage, she said.

In the six-minute clip, the group walks across the street away from her business doors as she yells at them about what she said is their lack of knowledge about what women who have unwanted pregnancies need.

“You don’t want people to get pregnant but you’re not handing out condoms?” she asks one of the men.

“Are you funding daycares? How many children have you adopted? Are you supporting women of colour in poor neighbourhoods who can’t afford to raise any children? Are you doing that? School breakfast programs -- how much of that have you funded?”

In an emailed statement to CTVNews.ca, a representative for the Canadian Centre for Bio-Ethical Reform (CCBR), whose staff and volunteers are often seen with the disturbing signs, supported the group’s response to Bundock.

“Unfortunately, there are people who respond to those who disagree with them with verbal abuse and profanity,” wrote Devorah Gilman, director of eastern outreach with CCBR. “When that takes place, CCBR's staff and volunteers always behave with the utmost professionalism, and do not respond in kind.”

The methods of the group, which has offices around the country, have offended more than Bundock. Earlier this month, Toronto city councilor Paula Fletcher posted a letter to the CCBR on Twitter that addressed a motion passed to have the group stop using graphic imagery in their literature.

Bundock believes she is acting on behalf of women who feel they can’t confront pro-life activists themselves.

After the incident, Bundock said women came into her pizza shop to thank her. Now the thanks are coming from comments on the Facebook post and messages sent to her on Twitter.

Bundock said she feels a kind of “unique duty” to women who have had abortions.

“So many of them can’t speak about it without it being too real and too close. It is worth it to me to defend other people’s right to those services and the autonomy over their body,” she said.

And her loud, aggressive approach is just what she thinks is needed.

“I am standing using my anger, my curse words as a shield that others can stand behind,” she said, “because nobody is going to stay on my block when I do that.”