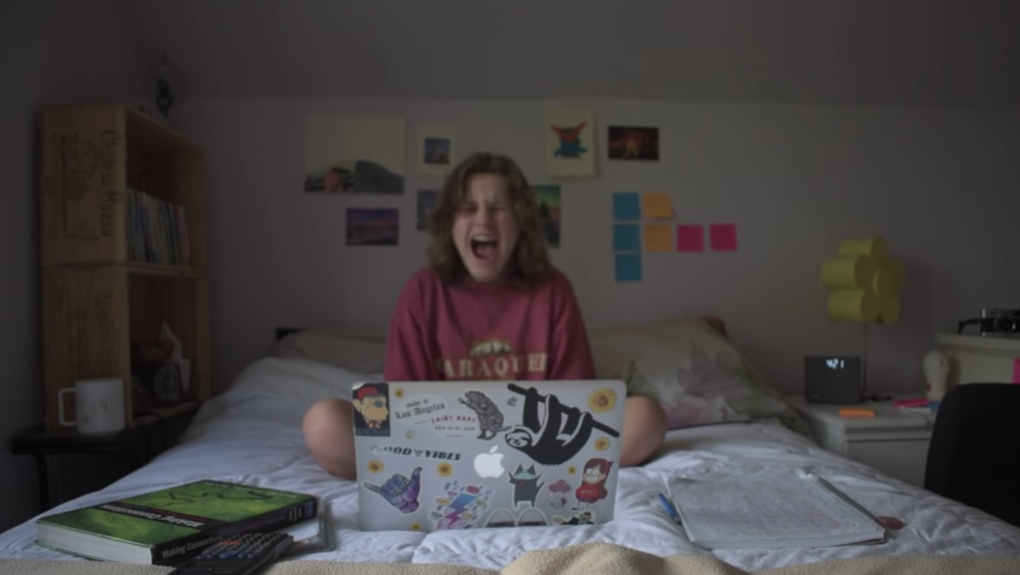 TORONTO -- Faced with an open-ended art project to close out the school year, it was clear to 15-year-old Liv McNeil what the subject matter had to be: self-isolation.

Like of a lot of Canadians, the Toronto teen, who just finished Grade 9 at Etobicoke School of the Arts, was hitting a breaking point during the COVID-19 pandemic. Three months in, the disruption of normal life was taking its toll on her mental health, she told CTVNews.ca

“At first it was kind of fine. I thought I had adapted to it and gotten used to it, but I realized I really missed my old life,” she said during a phone interview on Monday. She craved the structure of pre-pandemic school days, and the human connection that was easier before talk of physical distancing and “social bubbles.”

So she made a short film about “that feeling of monotony and numbness” that has emerged during the COVID-19 lockdown. The project itself only counted for about two per cent of her grade (she scored nine out of a possible eight marks, she said), but it’s been worth far more outside the classroom.

The video has garnered more than 100,000 views on YouTube since June 17 and even a shout-out from one of Canada’s most celebrated artists, director Sarah Polley, who called the three-minute short film a “masterpiece” on Twitter.

“Best film I've seen in a long time. Just. Wow,” the “Stories We Tell” director wrote in the post, later adding in a comment to the teen that “film suddenly seems like it has a bright future.” At first, Liv and her family thought the Polley account was an anonymous troll, but soon learned otherwise. “That was pretty cool,” she said. “She’s the real deal.”

The short film, which the teen shot and edited herself, is called "numb" and features Liv in her bedroom, staring at images of pre-pandemic life and scrolling through emails that wish her “health, happiness and safety.” The final minute is a stop-motion time lapse of the days passing as Liv sits in the same place on her bed, clothes changing, items around her moving. By the end, she breaks into a silent scream.

That sequence was actually filmed over a couple hours, not several days, she told CTVNews.ca. She didn’t have a tripod, so she set up her Nikon camera on the step of a ladder and filmed the same sequence over and over, soundtracked to M83’s “My Tears Are Becoming a Sea,” changing clothing items and shifting the position of objects in her room.

Originally inspired by emotional struggles during the pandemic, the project itself helped her deal with those very challenges, she said.

“It was like a coping mechanism. The success it got was a little bit of a coping mechanism, and also just the process of making it,” she said. “I had been doing nothing for months and once I finally started making this film, it felt like I was finally productive again. It felt good to have a purpose.”

A knack for the filmic arts might run in the family. Her father, Scott McNeil, has worked in television production, including work on such hits as “Holmes on Homes.” He told CTVNews.ca that he takes “zero credit” for his daughter’s latest success and he can hardly make it through the three-minute film without crying.

“There aren’t enough tissues in the house these days,” he said. “It’s been incredible to see the thing blow up, but also to watch Liv take the tsunami of recognition in stride.”

That recognition has also inspired Liv to think about what’s next. She’s majoring in visual arts, but thinks it might be time to switch to a double-major and incorporate film in her studies.

But she thinks she may need to jumpstart her next project outside the classroom sooner and make another film this summer.

“I’ve been told you get your whole life to make your first hit, and 10 minutes to make your second,” she said.

This (very short) film is a masterpiece about the lockdown made by Grade 9 student Liv McNeil. Do yourself a favour and take three minutes to watch it. Best film I've seen in a long time. Just. Wow.https://t.co/tQmSUkLgEB