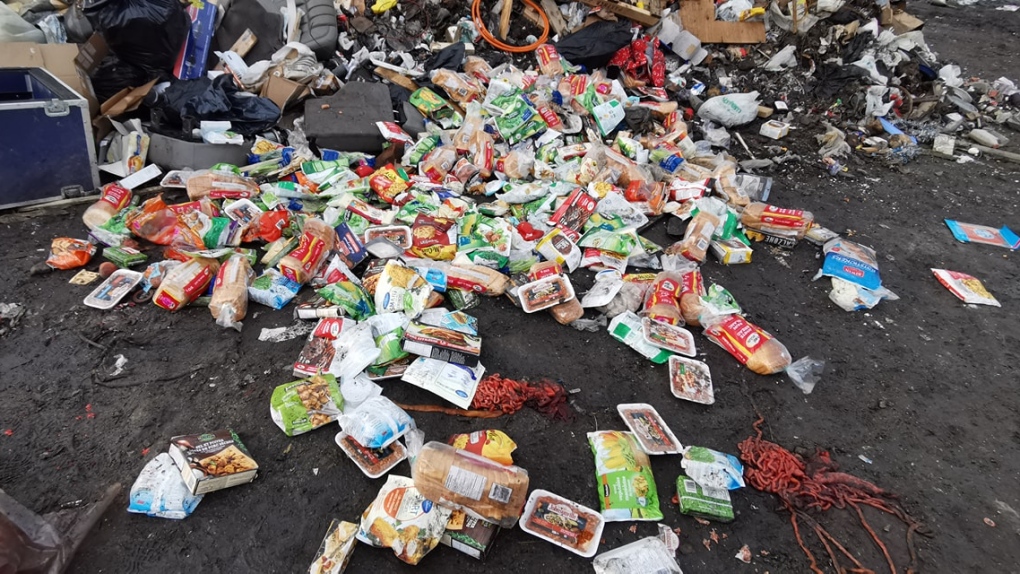 A Nunavut grocery store chain is apologizing to residents after thawing but potentially still edible food was dumped in a Pangnirtung landfill, instead of being given to food banks or residents. (David Kilabuk/Facebook)

TORONTO -- A Nunavut grocery store chain is apologizing to residents after thawing but potentially still-edible food was dumped in a Pangnirtung landfill, instead of being given to food banks or residents.

On Thursday, high winds knocked out power to some houses and businesses in Pangnirtung, Nunavut, including to the Northern Store, a grocery store part of the North West chain.

The next day, resident David Kilabuk was angered when he realized that the store had dumped piles of meat, eggs, bread, vegetables at the local landfill – some of which the company later told CTVNews.ca could have been edible.

After he posted pictures of the food on Facebook, dozens of people criticized the company for dumping food without consulting the local government or food bank to see what was salvageable.

“It is just cruel and heartless to waste this food where it is truly needed. Just common sense to not waste food,” Kilabuk wrote on Facebook.

In a phone interview, Kilabuk said during past power outages, the company had given thawing, edible food to food banks or sold it at a discount, “but this time they just threw it all away.”

“There’s lots of people here who have difficulty getting food – some of them all the time – somebody could have used it, someone could have ate it,” he said.


COMPANY APOLOGIZES FOR BEING 'OVERLY CAUTIOUS'

In a phone interview with CTVNews.ca, Alex Yeo, the president of the Canadian retail division of North West Company which owns Northern Store, offered his “apologies to the community of Pangnirtung” for not first checking with local officials to see what could have been salvaged, but said that some of it was “already looking unsafe.”

“In this case, we threw away stuff that was at the front of the store [which was] in freezers and chillers. We did not throw away anything in the back of the store because the temperature indicated that it was still safe,” Yeo said. “By the time it was in the landfill, most of the food was no longer safe for consumption according to CFIA guidelines.”

Yeo said the chain does have a food donation policy in place but that it wasn’t followed because the store manager was being “overly cautious.”

“The intention was never to deliberately throw away food. It was all concern over food safety,” he said.

“Our policy is to donate food whenever possible unless it’s clearly not safe for consumption,” he said. “But there was a miss on our part.”

Yeo said that the company should have went “product by product” and checked with locals once they knew how long the freezers and coolers would be without power, to see if any of the food could have been donated.

In an email to CTVNews.ca, the Pangnirtung mayor’s office said it only became aware of the incident from residents who had seen Kilabuk’s Facebook post.