Ready to live and work: Armenian-Syrians arrive with strong roots in Canada 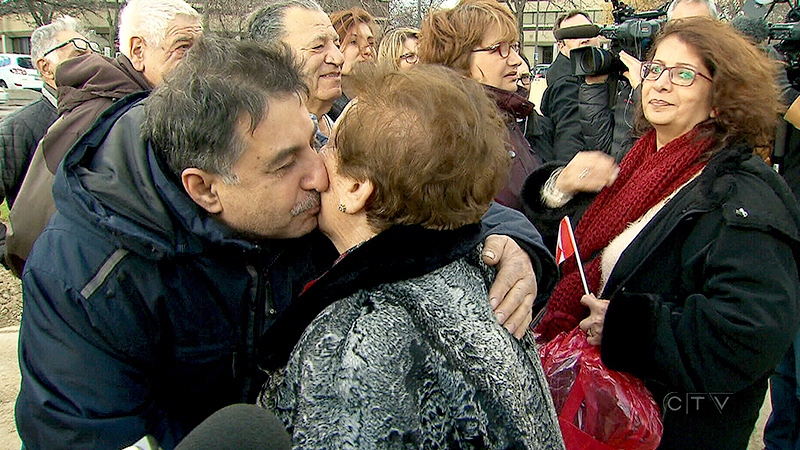 Loved ones reconnect in Toronto on Friday morning after 163 Syrian refugees arrived in Toronto late Thursday night. Among the newcomers are a music teacher, a pharmacist, a taxi driver, a trained violinist and a little girl excited for English classes.

Friday marked the first day of a new life for 163 Syrian refugees who recently arrived in Toronto, including many Armenian Christians who are reconnecting with estranged loved ones after years spent apart.

More than half of the first group of Syrian refugees are Armenian Christians who had been living in Syria, but were forced to flee after war broke out.

Among the refugees –- all of whom were privately sponsored -- are a music teacher, a pharmacist, a taxi driver, a trained violinist and a little girl excited for English classes.

And several newcomers say they already have their sights set on new jobs, school for their children and post-secondary aspirations.

One of those refugees is a pharmacist who plans to get his qualifications so he can work in Canada.

“First of all surely we have to find a job, and then I'm thinking to study," his wife told CTV News Friday morning.

The couple has already planned to put their five-year-old son in school as soon as possible.

“We're going to start a new life here,” she added.

Among the refugees was also Eddie Asaad, 19, who packed his prized violin in the limited baggage he was allowed for the overseas journey.

Now that he’s in Canada, his next goal is fairly typical for a 19-year-old: to get accepted to university.

“The day I received the acceptance (to Canada) I applied to three universities right here in Toronto," Asaad said.

The majority of the 163 refugees are expected to remain in Ontario and will be resettled in Toronto, Willowdale, Windsor, Hamilton and other communities. About 40 will move to B.C. and Alberta.

Trudeau was lauded in headlines across the globe for the in-person welcome, with media from the New York Times to the BBC profiling the move. GQ went so far to offer the headline: “Canadian Prime Minister Justin Trudeau Just Gave U.S. Politicians a Refreshing Lesson in Compassion.”

But possibly the most impactful greetings came from friends and loved ones, some of whom had nervously waited for years for family to flee the war-torn region.

Armenian-Canada Nayiri Balyozian hugged her brother for the first time in five years on Friday. He was one of about 90 Syrian-Armenian refugees who gathered at an Armenian community centre to meet with sponsors on Friday.

“I feel so good now with this reunion. Thanks to Canada, thanks to our Armenian community,” Balyozian told CTV Toronto.

Her brother, Housep Balyozian, said he is happy to be in a country “that has a lot of freedom, without weapons, without guns.”

“Emotional? I cannot speak,” he said.

Vartivar Kochoian drove from Montreal overnight to see his brother, George, who he hadn’t seen in 10 years.

Another plane with 160 Syrian refugees is expected to arrive in Montreal on Saturday, and McCallum says Ottawa is on track to resettle 10,000 refugees by the end of the year.

On Friday, the government also announced a $5-million donation from CN Rail that will be applied to the resettlement efforts.

McCallum described the move as setting “the platinum standard” for the business community, and called on others from the private sector to “show a similar generosity.”

With files from CTV News’ John Musselman and John Vennavally-Rao