“I think serological testing is an important part of understanding exactly how COVID-19 has been present in the country, including in people who haven’t displayed any symptoms at all. And as soon as those tests become more largely available to Canadians I will certainly insure that I am one of them,” he told reporters at Rideau Cottage on Tuesday.

In mid-March the prime minister entered self-isolation with his family after his wife tested positive for the virus after returning from a trip to London, England.

Over the course of their quarantine Trudeau did not take a COVID-19 test as he said he was not displaying any symptoms, which was key at the time to receiving a test. By the end of March his wife had received the “all clear” from doctors.

Health Canada has approved an Italian blood test that can detect COVID-19 antibodies, the first of its kind in Canada. While not yet available for the general public, it is being used in Canadian labs to determine if a blood sample contains COVID-19 antibodies, evidence that a person was exposed to the virus and has recovered.

When a person is exposed to any virus, their body develops antibodies to fight it off, which can linger in the blood for a period of time after infection and offer various degrees of immunity. What remains unclear with COVID-19 is how long these antibodies stay in a person’s system and what sort of protection they may provide against re-infection.

Procurement Minister Anita Anand announced Tuesday that work is underway to build up a “base supply” as these immunity tests “become approved and more widely available.”

Over the last two months, the federal government has committed more than $1 billion towards a national medical and research strategy to combat the novel coronavirus that will see labs across the country expand their capacity to study the virus, possible treatments or vaccines, as well as its spread among the population.

As part of this the federal government is creating a “COVID-19 immunity task force,” which comprises several of Canada’s top doctors and will focus on blood testing to track and understand immunity to this novel coronavirus, informing public health officials which prevention measures are the most effective.

The prime minister committed to making serology testing available to at least one million Canadians in the next two years.

As of midday Tuesday there were nearly 86,000 confirmed COVID-19 cases in Canada, of which nearly 45,000 had recovered. More than 6,600 people in Canada have died from the virus to date.

Trudeau also announced that the government is increasing its orders of personal protective equipment, noting that so far more than 40 planeloads of supplies have arrived in Canada and have been delivered to front-line workers, as domestic companies continue to produce much-needed medical gear. This comes as public health officials are bracing for a potential second wave with reopening efforts underway.

Among the latest measures: the federal government has signed a contract with General Motors to produce 10 million face masks, with production underway, and a new contract has been signed that will see an additional 10,000 ventilators ready this summer.

“On testing, we’re also making progress. We are supporting companies and research centres across the country as they develop new, improved COVID-19 test kits and products,” Trudeau said.

Throughout the pandemic Canada’s attempts to procure essential supplies have been a struggle, with the latest data from Public Services and Procurement Canada showing that just a fraction of what has been ordered has arrived. 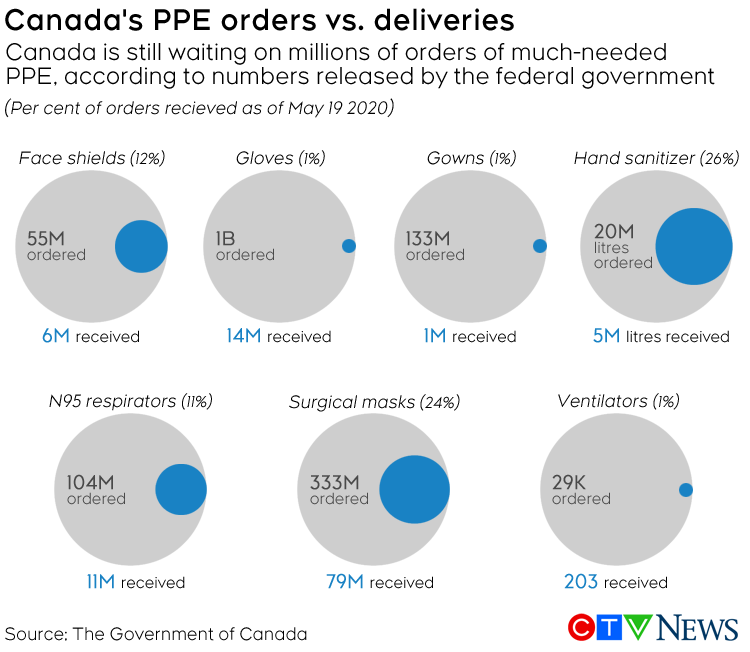 For example, of the more than 29,000 ventilators Canada has ordered, just 203 have arrived. Of the more than 104 million N95 respirator masks ordered, fewer than 12 million have been received and of those, 9.8 million didn’t pass testing for use in medical settings.

Anand said “capacity is on the rise” to procure PPE with 24 contracts with Canadian companies signed to date, and further deals are being pursued to increase testing supply capacity. More orders are expected from abroad to meet “immediate” needs, she added.

STOCKING UP FOR SECOND WAVE?

Two months ago, moving to supplement international procurement efforts—described as a “Wild West” battle to outbid other nations also scrambling to stock up— the federal government offered Canadian businesses and manufacturers assistance to retool their production lines to start mass-supplying life-saving medical supplies like ventilators, face masks, gowns, and sanitizer.

This was done in anticipation of shortages and concern that the COVID-19 outbreak would overwhelm hospitals, and while shortages of PPE have been the reality across many health facilities, Chief Public Health Officer Dr. Theresa Tam said Monday that the first wave—which appears to be on the decline—did not exceed the capacity of the health-care system.

Though, the need to continue to stock up is there given the ongoing rollout of economic reopening measures putting more people back on the job and in environments where potential exposure could occur.

“We're going to continue to do the work necessary to ensure that right across the country we have the PPE necessary to move forward safely,” Trudeau said Tuesday. “We recognize that as the economy reopens, as perhaps a second wave might hit us, we need to be ready.”