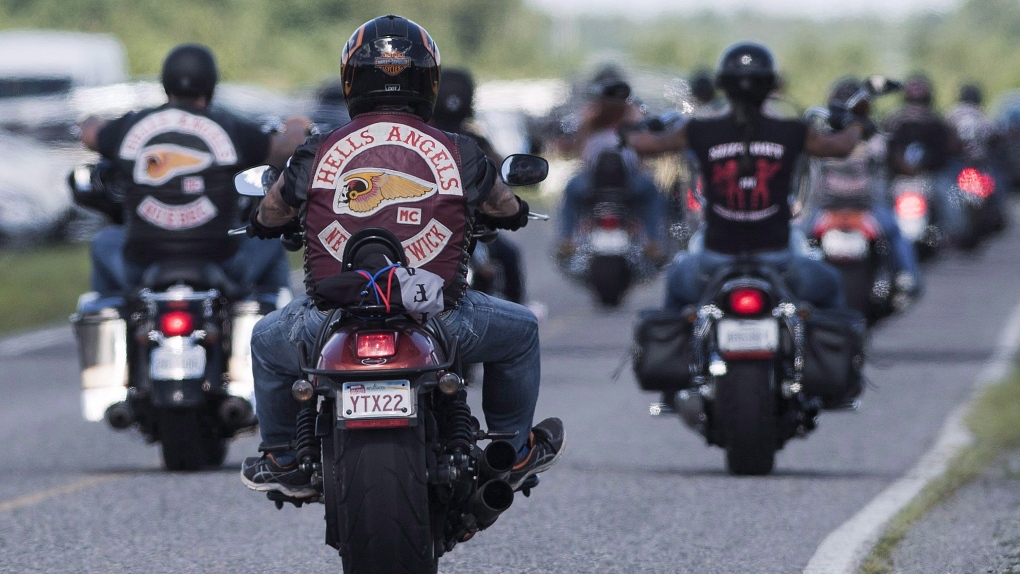 Members of the Hells Angels arrive for a national gathering in Saint-Charles-sur-Richelieu, Que., on Friday, August 10, 2018. THE CANADIAN PRESS/Graham Hughes

HALIFAX -- The Hells Angels have re-established an evolving presence in Atlantic Canada, although experts say they have not expanded their roster of full-patch members since first reappearing in the region more than two years ago.

Police and organized crime experts say it's not clear why the country's most powerful outlaw biker gang has not found any local prospects worthy of full membership, but confirm the Angels are retrenching after their former Halifax chapter was smashed by police in 2001.

Stephen Schneider, a criminology professor at Saint Mary's University who has written extensively on organized crime, believes the establishment of a new puppet club in the last year -- the Red Devils -- is a significant sign of intent.

"The Red Devils is pretty much their sort of AAA affiliate club internationally," said Schneider. "So this is a signal that the Hells Angels have not given up and that they are really serious about their presence in Atlantic Canada."

The Red Devils have set up chapters in Moncton, N.B., and in Halifax.

The members of the Halifax Red Devils chapter, which was set up in July, were recruited from two other biker clubs, the Gatekeepers and the Darksiders, according to RCMP Staff Sgt. Guylaine Cottreau of the Criminal Intelligence Service Nova Scotia.

"They were known to the Hells Angels and they came from the already existing support clubs," said Cottreau. "We have no Hells Angels prospects ... but they still have a good footprint in the province with their support clubs."

Cottreau said there had been a Nova Scotia prospects chapter, but it fell below six members this fall, and they've since become prospects for the Hells Angels in New Brunswick, where a Hells Angels Nomads club includes some full patch members that were transplanted to that province.

She said in addition to the Red Devils, Nova Scotia has a series of other outlaw gangs, including Darksiders clubs in Dartmouth and the Annapolis Valley, Sedition clubs in Fall River and Weymouth, and Highlanders clubs in Antigonish, Pictou County, and Cape Breton.

Experts believe the Angels are looking to expand territory and crack the drug trade in a region with several thousand kilometres of coastline, which makes it easier to import drugs.

The only so-called group of one percenters -- the elite outlaw bikers -- in Nova Scotia is the Bacchus Motorcycle Club, which appears to have reached a detente region-wide with the Angels. It was also declared a criminal organization in a July ruling by a Nova Scotia Supreme Court judge -- a move that has the potential to put a damper on its activities because it establishes tougher sentencing for crimes carried out to benefit the club.

Meanwhile, a traditional rival group for the Hells Angels, the Outlaws, has also pushed into the region with support clubs known as the Black Pistons in Fredericton and in Sydney, N.S., where they set up shop earlier this year. The Outlaws and Bacchus also operate in Newfoundland, along with several Hells Angels support clubs.

"Right now it is peaceful, however they (Outlaws) are the main rival group to the Hells Angels so there is potential there (for violence)," Cottreau said.

Schneider said he finds it surprising that the Outlaws are trying to move into Atlantic Canada after failing to emerge as a significant threat to the Hells Angels in Ontario.

"They have chutzpah I'll give them that," Schneider said. "They are still in there battling and trying to establish territory."

In Prince Edward Island there are two Bacchus club chapters and one affiliate chapter of the Hells Angels.

RCMP Cpl. Andy Cook said the Angels are down to six prospect members from 10 in P.E.I. and none of the bikers are full-patch. He said stepped up police enforcement likely led to some members leaving the club.

"Some of the incidents were probably not very attractive to the Hells Angels who are frequently trying to portray themselves in a positive light in the media," he said.

While it's believed the Port of Halifax is the main prize coveted by the Angels, police say they're not aware of any activity there.

Schneider, who recently completed a study for the federal government on organized crime in marine ports, said he hasn't seen any direct evidence either.

"I didn't see any known Hells Angels members working on the docks in Halifax, but that's not saying they aren't, or there aren't associates," he said.

Schneider said the Angels' influence has suffered setbacks through police enforcement actions such as the arrest in July of prominent New Brunswick member Emery Martin on 10 drug-related offences. However he believes it was the success of a crackdown years before against the biker group in Quebec that has had the most impact.

In April 2009, Operation SharQc resulted in 156 arrests and the closure of several of the biker gang's clubhouses, however many of the court cases eventually fell through and Schneider said the Hells Angels have seen a resurgence in Quebec that has implications for the Atlantic region.

"They are in a better position to help Atlantic Canada establish chapters and puppet clubs. Having the Red Devils set up in Moncton is significant because they are a Tier 1 puppet group that has long been associated with the Montreal chapter of the Hells Angels."

Cottreau said police are aware of the emerging threat and observed a Quebec Hells Angels presence in the region over the summer.

She said police will move to enforce the law against the Angels where and when they can.

"We are trying to disrupt and dismantle them but it is a big task. They are a pretty well established organization."