A total ban on handgun ownership in Canada, exempting only police and security professionals, would enjoy significant support among Canadians, according to a new survey by Nanos Research.

The survey conducted for CTV News found that 48 per cent of Canadians would support such a ban, while another 19 per cent would somewhat support it.

Politicians in two major cities have recently asked the federal government to implement some form of a handgun ban.

Toronto city councillors asked for permission to ban the sale of handguns and ammunition within city limits in July following a mass shooting that left two people dead and 12 others injured. Ontario Premier Doug Ford has opposed the request, saying it would unfairly penalize responsible gun owners.

It is believed that an illegally acquired gun was used in the Toronto mass shooting on Danforth Avenue. The gun used in a shooting in Fredericton, N.B., last month was legally obtainable, and the suspect in that shooting had a valid licence to obtain it.

The Nanos survey found that a handgun ban was supported or somewhat supported most strongly in Quebec (77 per cent) and least supported in the Prairies (55 per cent).

Older respondents were more likely to support or somewhat support a handgun ban than younger ones. Women were significantly more likely to be in favour a ban, at nearly 75 per cent compared to 59 per cent for men.

As for other ideas floated to potentially address gun violence, 34 per cent of respondents said they would support increasing police funding to combat gun crime. Another 38 per cent said they would somewhat support that idea.

This is the approach the Ontario government has taken, with Ford recently announcing $25 million in new funding for police and court services in Toronto, all of which is to be used combating guns and gangs.

Respondents were also asked whether they felt spending more money on policing, mental health advocacy and education would be a more effective way of reducing gun crimes than implementing harsher penalties and other criminal justice reforms. The results were nearly split, with 49 per cent of respondents – including the majority of respondents who are female, 18 to 34 years old or from Quebec – selecting the first option and 43 per cent preferring the latter.

Fourteen per cent of respondents said recent mass shootings and other “gun related” events in Canada have made them less willing to go to crowded public areas, while 80 per cent said gun incidents did not make a difference for them.

Police-reported violent crime involving firearms has been increasing since 2013, according to Statistics Canada -- although it’s still down from 2009. 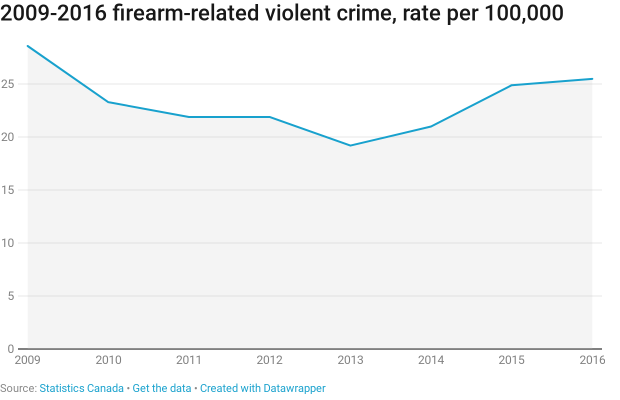 These observations are based on a hybrid telephone and online random survey of 1,000 Canadians, 18 years of age or older, between Aug. 25 and Aug. 27, 2018 as part of an omnibus survey. Participants were randomly recruited by telephone using live agents and administered a survey online.