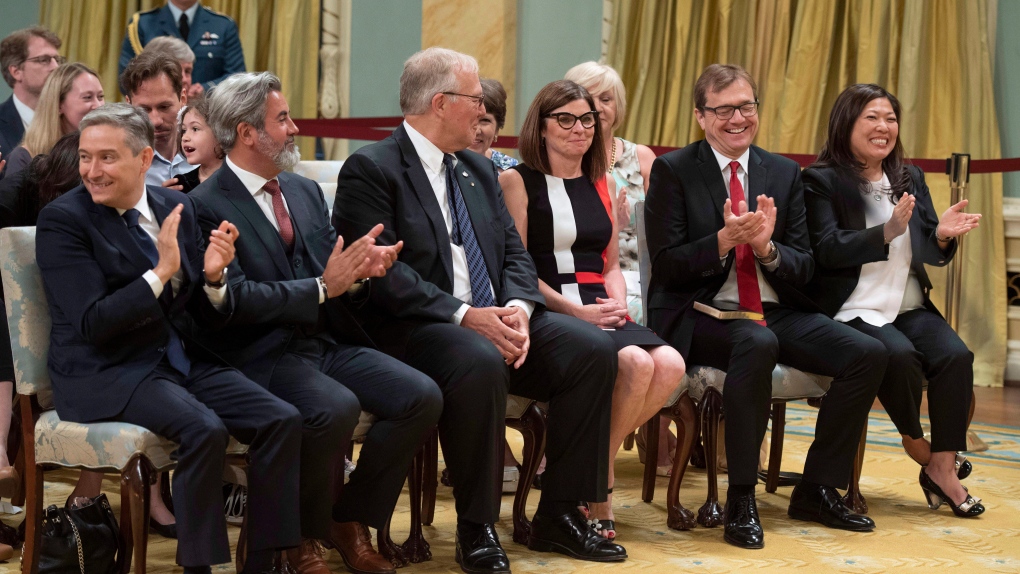 OTTAWA –Prime Minister Justin Trudeau has released what he is tasking the newest additions to the federal cabinet with, including leading conversations with the U.S. on the Safe Third Country agreement for asylum seekers, a potential handgun ban, and launching free online French and English language training.

The ministerial mandate letters spell out what Trudeau expects each of his ministers to accomplish on their files. This includes both broader ideas and priorities, and fulfilling specific promises and commitments.

Tuesday morning, the letters were released for the handful of ministers who were appointed, or re-assigned in last month’s cabinet shuffle. These ministers have the unique challenge of having to work through everything on their to-do list before the next federal election, slated for October 2019.

Among the new focuses for Trudeau’s team—on top of their pre-stated priorities of the middle class, improving Indigenous relations, and fighting climate change—are trade diversification, increasing tourism in Canada, and supporting small businesses.

Here are some of the noteworthy priorities ministers have been assigned:

Border Security and Organized Crime Reduction Minister Bill Blair has taken on a brand new positon within cabinet, in which he will be focused on stickhandling the current irregular migration issue, which has put pressure on local, provincial, and federal resources amid criticism from the Liberals' political opponents. As part of tackling this issue, Blair is being instructed to lead conversations with the U.S. on the Safe Third Country Agreement. There have been calls from both the NDP and Conservatives to renegotiate the agreement to better address the current influx of asylum seekers coming across the American border into Canada.

Blair is also going to be leading an "examination of a full ban on handguns and assault weapons in Canada, while not impeding the lawful use of firearms by Canadians," something the government has been floating over the summer, following a series of high-profile and deadly shootings across Canada.

Trudeau also wants Blair to reduce opioid smuggling into Canada, and crack down on organized crime and gang activity in Canada. These are new focuses for the government, on top of Blair staying on the continuing cannabis legalization rollout.

International Trade Diversification Minister Jim Carr has been asked to "promote and protect Canadian agricultural interests during trade negotiations." It seems to be a nod to Canada's supply management system, which allows dairy and poultry producers to control the market and therefore the price of their products. Supply management has reportedly been a sticking point in NAFTA talks with the U.S.

Trudeau also wants Carr to come up with "strategies to increase trade with key global markets whether or not a trade agreement already exists," as well as to advance trade in the Asia-Pacific region.

Tourism, Official Languages and La Francophonie Minister Melanie Joly has been asked to boost tourism to Canada via several avenues, and has been asked to establish a free, online service to learn and retain English and French as second languages. This project is meant to honour the former Liberal MP Mauril Belanger, who died in 2016 after battling ALS.

Intergovernmental and Northern Affairs and Internal Trade Minister Dominic LeBlanc is tasked with eliminating trade barriers between the provinces and territories, with a focus on areas where progress can be achieved quickly. It’s unclear specifically which sectors this may apply to, though there have been strong calls to loosen the current restrictions on bringing wine and beer across Canadian borders. He’s also going to be helping sell the federal carbon tax plan, which is facing increasing opposition among provincial leaders.

Seniors Minister Filomena Tassi will be taking the lead on a new initiative to "address crimes that target seniors including elder abuse and online financial scams," as well as design an initiative aimed at protecting seniors from "high pressure sales tactics." Trudeau has also instructed her to study ways to address dementia.

Canadian Heritage and Multiculturalism Minister Pablo Rodriguez has been assigned several social initiatives, including one focused on enhancing local support for "young Black Canadians at risk" to create more culturally appropriate mental health supports for the Black community. He's also going to be advancing a promise to support local and non-profit journalism; and bringing forward an Indigenous Languages Act to revitalize, and preserve Indigenous languages.

Infrastructure and Communities Minister Francois-Phillippe Champagne is to do better at communicating the federal investments in infrastructure across the country, and to ensure that the money spent on these projects is reported transparently. He is also going to be helping make sure critical infrastructure is safe from cyber-threats.

Small Business and Export Promotion Minister Mary Ng is being asked to lead a new "Women Entrepreneurship Strategy" and double the number of women-owned businesses in Canada by 2025. "You should draw on the work of the Canada-United States Council for Advancement of Women Entrepreneurs and Business Leaders," Trudeau states in her letter. She's also been asked to cut the red tape for small businesses, with a focus on digital services.

Fisheries, Oceans and the Canadian Coast Guard Minister Jonathan Wilkinson has been asked by Trudeau to follow through on Bill C-68, the fisheries act reform legislation tabled more than a year ago and which cleared the House in May but hasn't progressed through the Senate. Wilkinson has also been instructed to "take into account climate change" when making decisions that may impact ecosystems.

In addition to announcing the new mandate letters, Trudeau also shook up the current roster of cabinet committees, the high-level and closed-door teams of ministers assigned to work on various broad policy issues. Four previous committees have been eliminated, including a committee focused on openness and transparency.

Among the new committees being formed is a special sub-committee that will be "tasked with addressing the unacceptable hardships caused by the Phoenix pay system, and implementing a modern, reliable, long-term solution."