Former convicts reluctant to go public for forum on pardons 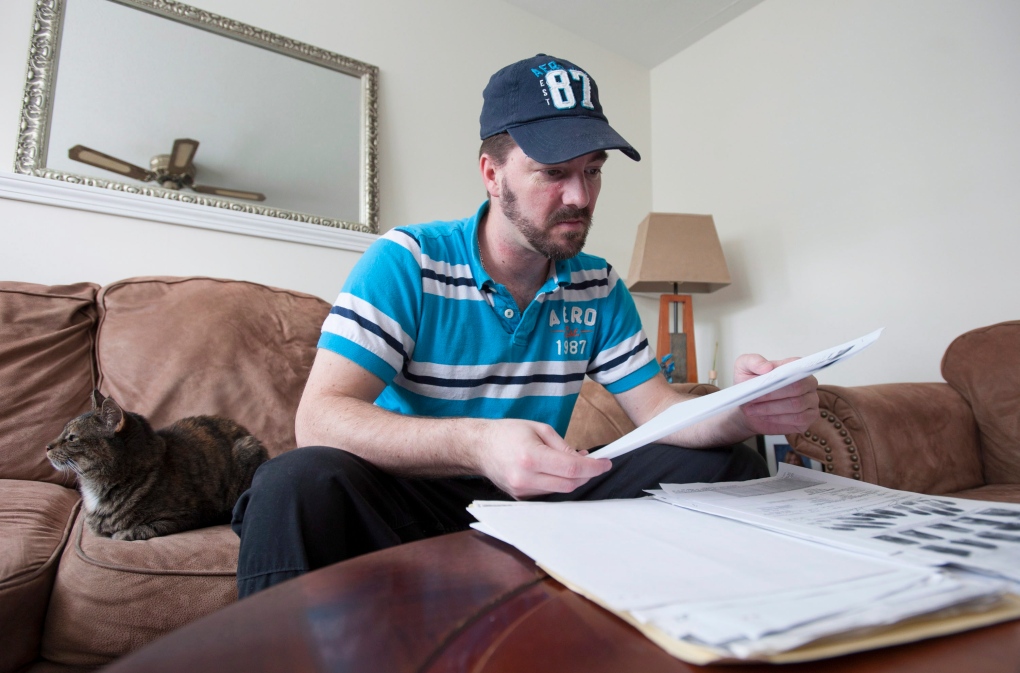 David Arnold looks through some of the documents relating to his 1992 arrest and conviction on a theft charge at his home in Fredericton on April 2, 2013. (David Smith/THE CANADIAN PRESS)

OTTAWA - A public forum on changes to the federal pardons system this weekend hopes to raise awareness about the heavy impact on individuals of an ongoing government crackdown.

But just getting the forum at the University of Ottawa off the ground has proven a stark illustration of just what rehabilitation advocates are up against -- a powerful stigma that keeps former convicts in the shadows.

"We had hoped to have more individuals coming forward and wanting to talk about their situations," Samantha McAleese, a forum organizer who works for the John Howard Society of Ottawa, said in an interview.

"Unfortunately it's hard to get people to come and speak in public when they've got a criminal record and the file's sitting in the backlog."

Friday night's panel, put on by the university's Criminalization and Punishment Education Project, was initially scheduled for mid-March but was delayed in hopes of finding more pardon supplicants willing to go public. Despite those efforts, however, most of the 10 of so testimonials will be delivered anonymously, McAleese said.

"With the stigma surrounding it all, it was harder to get people to share their stories" than expected, she said.

An estimated 2.4 million Canadians have a criminal record, and since 1970 more than 400,000 people have received a pardon -- which seals their criminal record, but does not absolve them of a crime.

Pardons are considered a powerful tool in keeping people from re-offending. More than 97 per cent of all pardons granted historically have not been rescinded -- something that happens automatically if a pardoned individual is convicted of another crime.

The numbers suggest a pardoned individual is statistically far less likely than the population at large to commit an offence.

Since 2010, the Conservative government has made a series of changes to the pardons regime designed to make it more difficult -- and in some cases impossible -- for ex-convicts to seal their criminal records.

The reforms were sparked after The Canadian Press reported that serial sex offender Graham James, a high-profile former junior hockey coach, had been quietly pardoned. James has since pleaded guilty to more sex offences.

While the James case was horrific, it is not in any way representative of the usual pardon applicant, according to those who handle thousands of applications annually.

David Arnold, a 39-year-old single father in Fredericton, is more the norm -- although his pardons experience can hardly be described as routine.

Arnold has applied three times to seal the record of a burglary conviction for which he received a suspended sentence when he was 18.

He's currently unemployed -- his application to join the Canadian Reserves on hold pending his latest pardon bid, which has been stuck in a government-created backlog since July 2011.

Arnold didn't even realize he had a record until his career in security management with Walmart was derailed by a routine criminal record check almost a decade ago.

That's when his suspended sentence popped up, along with an unpaid restitution order involving a family member who never wanted repayment.

Three years later he was eligible to apply again, but a clerical error by the court indicated he'd been convicted of an indictable offence -- not his actual summary offence. Because the crime-free waiting period for indictable offences was five years at the time (it has since been raised to 10 years), Arnold was forced to wait another two years to apply.

He's at his wits' end, his employment insurance set to run out in July when he fears he'll be forced onto welfare.

"I'm almost 40, it happened 20 years ago," Arnold said in an interview. "Give a guy a friggin' break, would you. I have no other criminal charges."

Arnold says he's happy to serve as an abject lesson for scaring youngsters straight, but doesn't apologize for his troubled youth.

It's a common refrain.

Gilles, a 40-year-old Montrealer who works as a telecommunications contract employee for Bell Mobility, was convicted in 1996 of producing and trafficking marijuana. He served two years less a day of house arrest.

Gilles, who did not want his real name used, applied for a pardon three years ago in hopes of getting on with Bell full time and being able to do some contract work in the U.S.

He has since been informed that new federal rules enacted in 2012 extended the crime-free wait period for his indictable offence to 10 years from five, meaning he can't seal his record until 2018.

"Simply put, they don't believe in that, in reintegration, the federal government," Gilles said.

"They don't believe in it at all. All they want is prison time. They don't help the guy who wants to get on with his life without any problems."

Friday's panel discussion will detail all the federal pardons changes, including last year's application fee hike to $631 from $150, the doubling of crime-free wait periods and the exclusion of certain groups of offenders.

Front-line field workers will detail barriers to employment, education and housing imposed by a criminal record, and a representative of the Elizabeth Fry Society will speak about how women are affected by criminal records.

"Our end goal is to make people realize that there are individuals being impacted who it is really impeding their ability to reintegrate and to move on from their past," McAleese said.