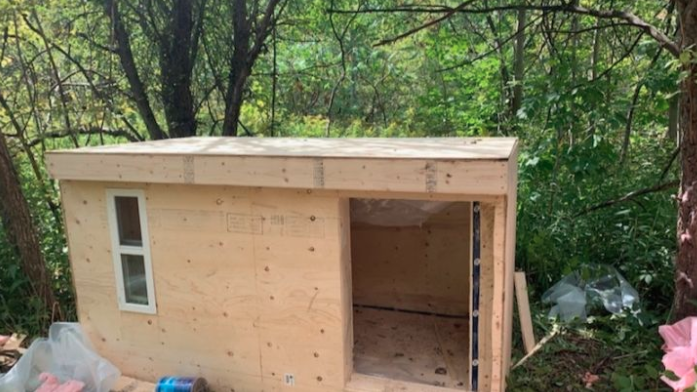 TORONTO -- In October, the story of a Toronto carpenter who was building tiny portable shelters for people living on the streets to have a warmer, safer place to stay than in a tent, warmed hearts across Canada.

But last week, Khaleel Seivwright received an email from the city telling him his shelters were not permitted on city property -- leading supporters to demand change for how the city handles homeless encampments.

“They told me to stop making them and that I can't put them on city property and that they will remove them without warning and charge me for the cost of their removal,” Seivwright told CTVNews.ca in a phone interview.

He was told that he was “breaking municipal bylaw in terms of having structures on city property.”

Seivwright had been constructing small wooden structures on wheels, big enough to lie down in and sit up in, since September, and donating them to people experiencing homelessness who had expressed an interest. The “Toronto Tiny Shelters” are insulated like residential homes, have a small window and a door, and are designed to keep an occupant comfortable in -20 degrees Celsius with only the occupant’s body heat to warm it.

In order to help more people, Seivwright started a GoFundMe to raise money for supplies. After media outlets covered his crusade, he experienced a huge swell of support, and has raised more than $165,000 as of Wednesday.

But the attention on the project was a double-edged sword.

“By having so much support, it was able to create pushback from the city,” Seivwright said.

He said he was surprised by the takedown notice from the city, because the community development department -- specifically officials who work with vulnerable Torontonians -- had reached out around Nov. 12 about a potential partnership, according to Seivwright.

CTVNews.ca has reached out to the officials in question for confirmation.

He said they discussed ideas for where to place the shelters on city property so residents could have access to public facilities such as bathrooms, as well as ideas for putting together portable facilities that could aid those in encampments.

“Like a trailer that's heated where people could come and use a washer and take showers and do their laundry,” Seivwright said.

The department that sent the order to cease his work on the structures was Parks, Forestry and Recreation.

“They did not seem to indicate that they were aware of a partnership,” Seivwright said.

A spokesperson with the City of Toronto told CTVNews.ca in an email that last Thursday, Seivwright “was informed via email that the structures are not allowed on City property and that the City can remove them at any time.”

The City said they would be sending trespassing warnings to nine tiny shelters that they were aware of, giving 72 hours notice ahead of the shelters’ removal.

Initially, the city said that the wooden structures weren’t considered safe because they lacked fire alarms and hadn’t been inspected. After CTVNews.ca pointed out that Seivwright says each structure is outfitted with a fire alarm and a carbon monoxide alarm, the city clarified that they were still potentially unsafe because they hadn’t been inspected by Toronto Fire Services, and “are not designed to have the elements that would make a fire safe dwelling.”

Seivwright said that Toronto Fire Services have not contacted him to inspect the shelters. He said he will be having an independent fire inspection done “just to show them that it is safe.”

The issue is larger than the tiny shelters themselves. Encampments -- areas where people experiencing homelessness have set up tents and structures, usually within city parks -- are not permitted according to city bylaws.

“Conditions in encampments create significant health and safety concerns for those living outside, as well as for the community-at-large,” the city said in a statement. “Open flames, generators, propane tanks, and lack of access to water and sanitation, increases health and safety risks for those who live outside.

The statement said that Toronto Fire Services have responded to reports of more than 189 fires in encampments so far this year.

“Sadly, one person has died in an encampment fire this year,” the statement said.

“The City has close to 6,800 spaces in shelters and 24-hour respite sites (permanent and temporary). The City is opening 560 additional spaces as part of the Winter Services Plan and will offer more spaces at four warming centres during Extreme Cold Weather Alerts.”

Since the start of the pandemic in March, the city says they have been able to refer 1,100 people from encampments to safe locations inside shelters or hotels. The pandemic, and the danger of crowded indoor spaces for transmission of the virus, has made operating a safe shelter system even more difficult, and add a complication to the city’s attempts to move people out of encampments.

Although encampments can present fire hazards and also can be dangerous in lower temperatures -- a problem Seivwright’s shelters aimed to address -- they also may be less risky in terms of COVID-19 than a traditional shelter, purely by being outside.

That’s one of the reasons Seivwright’s heard from people who prefer encampments over the shelter system, but it’s far from the only one.

“Some of them have tried to go into shelters and then have been kicked out for not following certain restrictions,” he said. “Other people are immune compromised and they're very fearful of the sanitation of shelters.”

He said many people in encampments also have spent time in shelters, and experienced theft, violence, or simply didn’t feel as safe as they felt sleeping in a tent outside.

“There's quite a few reasons and I guess COVID is just making that decision even harder for people to make,” Seivwright said.

The winter can be deadly for those who don’t have a place to turn to. In 2019, 52 people experiencing homelessness died between October and January. Shelters are often at capacity during the colder months, a challenge the city has struggled to deal with for years.

Seivwright is adamant that his shelters are meant to be a temporary aid to get people through the winter safely, and that they are not meant to disrupt or replace the city’s attempts to help those experiencing homelessness, but are trying to help those who fall through the cracks.

The city says encampments are not cleared “until notice has been provided and everyone sleeping on-site is offered a safe, inside space.”

But as they cannot force people to take up their offer of a shelter space if they don’t feel safe there, it’s unclear how many people have simply had to pack up their belongings and try to find a new place to camp.

“It's one thing to be asked if you want to go to a shelter or hotel, if there's space for them,” Seivwright said. “And it's another to just be forced to leave. It's just moving the problem and it's not fixing anything.

“They continue to repeat that, we've saved 1,100 people, we've gotten 1,100 people off of the streets, but it is this continuous refusal to talk about how many people get kicked out or just don't make it into shelters and die every single year from exposure,” he said. “And I wouldn’t imagine this year's going to be any different — I think it's going to be much worse because there's many more homeless people.

“So not acknowledging that that is a reality and that in order to minimize the amount of suffering and deaths, maybe the [tiny] shelters are going to be a part of the solution — I feel like an acknowledgement of that reality is something I think would be important.”

After Seivwright announced earlier this week that the city was threatening to remove the shelters and didn’t want them on public land, there was an outcry on social media.

Toronto Tiny Shelters has officially launched a petition asking the City of Toronto to “reverse their stance on temporary shelters, allowing them to remain in City parks during the Winter of 2020-2021.”

As of Wednesday night, the petition had more than 16,500 signatures.

“Advocates estimate that there are over 1000 people living outside in Toronto - the city’s winter plan only accounts for 560 people,” the petition states. “These spots are not always safe, especially during a global pandemic.”

Seivwright believes the reaction to his shelters from the city “has to do with not having control of the situation.”

But despite the struggle, he says he’s not slowing down.

The response from those who receive a tiny wooden shelter has been “overwhelmingly positive,” he said.

“Just being consistently warm and being able to lock your stuff away and also being able to sleep in there and then put your latch on and know that no one's going to bother you, know that you're not going to be attacked while you're sleeping,” he said.

He said those who have used them have also remarked how much quieter it is inside the shelters “compared to sleeping in a tent when it's raining or there's a lot of wind or there's just people outside making noise for whatever reason. It's very quiet.”

Since the struggle with the City is related to the idea of the shelters being in encampments on public land, he is looking for anyone willing to host the shelters on private land, so that the project can continue.

“We are in contact with one church that will definitely house our shelters,” he said. “So yeah, we’re finding property for these things to exist if the city does end up following through with removing these shelters from the city parks.”