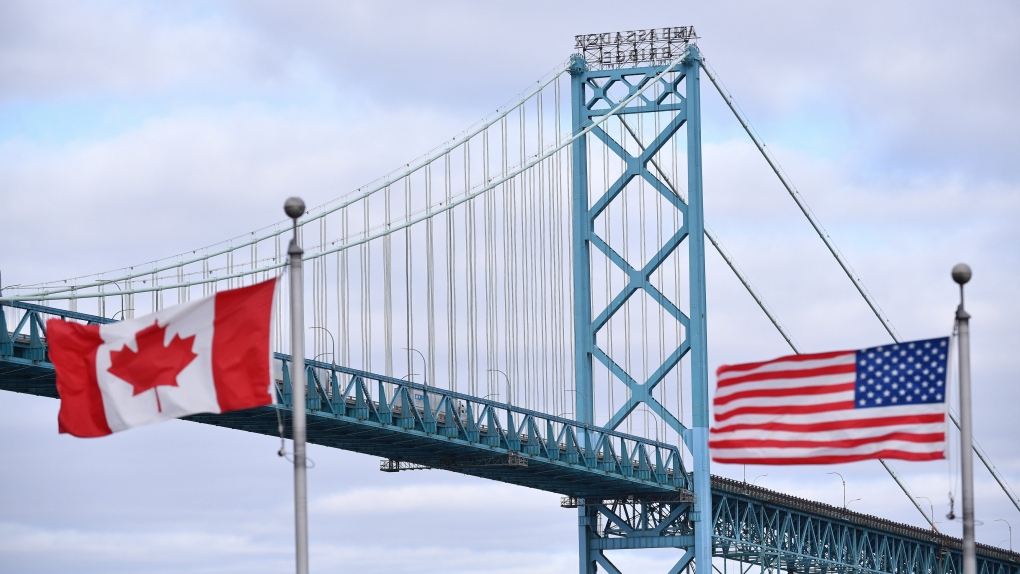 Canadian and American flags fly near the Ambassador Bridge at the Canada-USA border crossing in Windsor, Ont. on Saturday, March 21, 2020. THE CANADIAN PRESS/Rob Gurdebeke

TORONTO -- Canadians’ opinions of their neighbour and biggest trading partner sank to record lows over the past year, with more than three in five Canadians holding an unfavourable view of the United States and a growing minority who see the country as an enemy, according to the Environics Institute survey, Focus Canada, published on Thursday.

On other issues, including the upcoming U.S. elections, 67 per cent of Canadians favour Democratic nominee Joe Biden for president, while 15 per cent prefer Trump. Canadians, including those who support the Conservative Party, have consistently favoured Democratic candidates since 1988, though the gap in preference widened dramatically since 2004.

These overall declines in U.S. opinion followed the election of Donald Trump in 2016, considered an unpopular presidential choice for Canadians, according to the survey. In 2016, 17 per cent of Canadians preferred Trump, compared with 68 per cent who preferred Hilary Clinton. Trump’s election marked the first time more Canadians had an overall negative opinion of the U.S. than a positive one since polling began in 1982.

A decade earlier, during former president Barack Obama’s first term, 73 per cent of Canadians had a favourable view of the United States, the highest proportion since the Sept. 11, 2001 attacks. This figure dropped to 44 per cent after Trump’s election and declined further this past year. Now, 63 per cent have an unfavourable view, also a record high.

The survey indicated that the trend could be a reaction to Trump’s policies and behaviour since taking office, as well as the growing social and racial tensions in the U.S. in recent years.

While the decline was seen across Canada and across all demographics, the survey found the change most pronounced in Ontario, which saw a drop to 26 per cent from 41 per cent, and among those who identify with the Conservative party, which saw a decline to 45 per cent from 63 per cent. Favourable opinions remain highest in Alberta at 39 per cent, and lowest in Ontario and B.C. at 26 per cent each. More men than women had a favourable opinion of the U.S., a pattern that’s been consistent since Trump was elected.

Despite the growing negative sentiment, most Canadians still support free trade with the United States and believe that overall, the North American Free Trade Agreement (NAFTA) – and the new NAFTA -- was beneficial to Canada’s economy.

Over the last 10 years, the number of Canadians who consider the U.S. a friend has also declined sharply, from almost 9 in 10 down to 6 in 10 -- lower than India, Germany and Japan. Women were also much more inclined than men to no longer see the U.S. as a friend.

Views on the U.K. and France as friends have remained mostly steady over the last decade, however. Most Canadians who did not consider these countries friends had a neutral view, but for the first time, more than one in 10 Canadians saw the U.S. as an enemy. In 2013, that figure stood at 1 per cent.

The Focus Canada public opinion survey was conducted in partnership with the University of Ottawa and Century Initiative and is based on telephone interviews with 2,000 Canadians between Sept. 8 and 23, 2020. The results are considered accurate to within plus or minus 2.2 percentage points in 19 out of 20 samples.