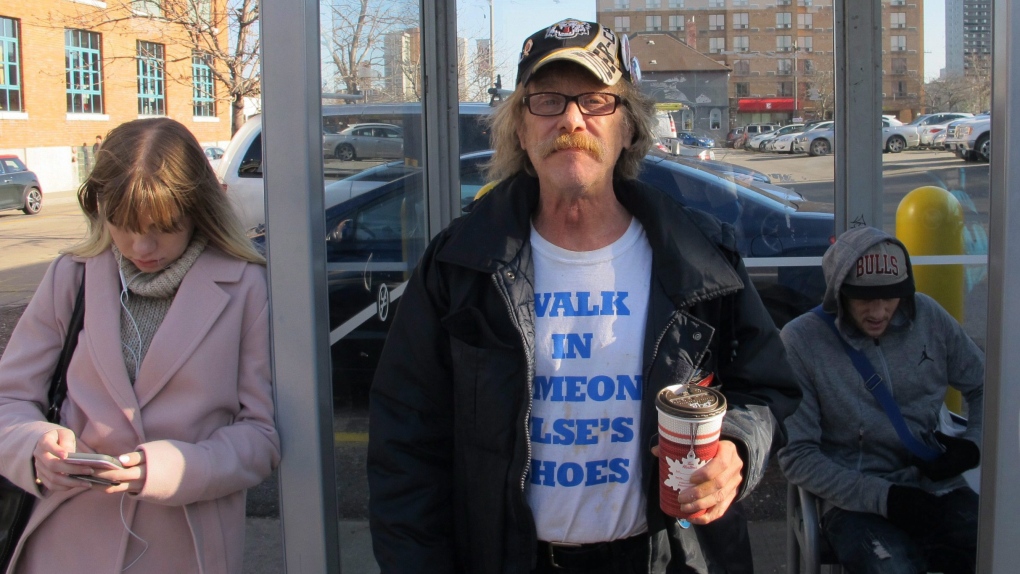 In this Nov. 21, 2017 photo, former security guard Tim Button poses for a portrait at the bus stop to take a local ride, a recent luxury he at one time could not afford in Hamilton, Ontario, Canada. Button says he has been unable to work because of a fall from a roof and the financial boost from the province's basic income program has enabled him to make plans to visit distant family for Christmas for the first time in years. (AP Photo/Rob Gillies)

Many participants of Ontario’s basic income pilot project feel “hopeless” and “lost” since its cancellation was announced last year, according to a new report released Monday.

The project was an “angel in disguise” for the some of the more than 400 participants surveyed, said the “Signposts to Success” report by Basic Income Canada Network.

“You have to give people the ability to manage their own lives, and the survey shows that they will do it well,” said BICN Chair Sheila Regehr in an interview with CTVNews.ca. “What we find is it’s not just the money but the ability to spend your time and money the way you decide. That makes a huge difference to your mental framework, your confidence and how you approach everything else in your life.”

Respondents reported that they got and kept jobs, started businesses, pursued education and training, and improved the health and well-being of themselves and family members.

“To see things happen so quickly, to see lives turned around in really remarkable,” said Regehr. The cancellation “threw people’s lives into an uproar.”

BICN received 424 responses from 1,500 recipients of the voluntary survey.

The Ontario PC government, who did not seek follow-up information from participants in the project, announced in the summer of 2018 that it would cancel the pilot, which began in 2017. It was planned to run for three years, providing payments to 4,000 low-income people in Hamilton, Brantford, Thunder Bay and Lindsay. Single participants receive up to $16,989 a year while couples receive up to $24,027, less 50 per cent of any earned income.

Participants will receive their final payment on March 31. The Tories had originally promised to preserve the pilot project, but Social Services Minister Lisa MacLeod later stated that the project was “failing.” The evidence gathered in the new report suggests otherwise.

“It provides compelling indicators of lives remarkably changed for the better,” the BICN news release says.

Some 88 per cent of respondents said they were less stressed and anxious, and 73 per cent had less depression. Some 28 per cent of those surveyed said they stopped using food banks, and 74 per cent said they made healthy food choices. More than half of respondents reported improvements in their housing situation, while nearly a third went back to school or sought skills training to improve employment.

“Basic income has allowed me to receive an education that I otherwise wouldn’t be able to receive,” wrote on respondent.

“I felt finally like I was a part of society and not isolated,” wrote another. “It was a feeling of confidence, self-worth.”

Regehr said that the Ontario program was never the end goal in basic income advocacy, but it could have been a “shot in the arm” to get a national initiative started. “This has to be national to be really successful,” she said.

Today we released results from our survey of Ontario basic income pilot recipients. Our report shows that the program was working, enabling improved employment, education, and health outcomes. It's time for a national program for basic income. https://t.co/4dMKBfGhCb pic.twitter.com/uXUf4rVEOA