4 Canadians among the dead in Las Vegas shooting

A mother of four from northern Alberta, a Calgary-area model and educational assistant, and a B.C. mechanic who loved his cowboy boots were among the 59 killed in Sunday’s mass shooting in Las Vegas. At least nine other Canadians were hit by gunfire. Here are their stories.

Mechanic Jordan McIldoon of Maple Ridge, B.C. would have celebrated his 24th birthday on Friday.

McIldoon’s grandmother, Ann Norman, told CTV Vancouver that her grandson was an only child with a big heart who worked hard, loved his family and looked after his girlfriend.

Las Vegas resident Heather Gooze said in a Facebook post that McIldoon died in her arms. She described the tragic scene in an emotional interview with CNN on Tuesday.

“I had my hand over his hand, and I could kind of feel his fingers wrapped around my hand,” Gooze said. “I felt like a squeeze on my fingers, and then I just felt the fingers go loose.”

She said the concert venue was not unlike a warzone once the gunfire started, with people using ladders and other objects as makeshift stretchers to evacuate the wounded. Another man nearby, she recalled, was kneeling beside his dead wife, unwilling to leave for safer ground.

Gooze said she eventually managed to unlock McIldoon’s iPhone after he died by asking Siri to call his mother.

“We called his mom. I said, ‘I promise you, I swear to you, that I will not leave him. I will stay with him until this is over,’” she said. “I just didn’t want him to be a John Doe.”

McIldoon will be remembered as a compassionate, adventurous, and loving young man. He was a few months shy of finishing a heavy duty mechanic apprenticeship, loved extreme sports and the outdoors, and was “rarely seen out of his cowboy boots,” according to a statement released by the family on Tuesday.

“From the people who stayed with Jordan that night and held his hand, to the first responders who had to rush in to an unimaginable scene, we would like to thank everyone for their incredible love and support,” the family wrote.

B.C. Premier John Horgan called the violence “horrifying” and “incomprehensible,” adding that his “thoughts are with the family.”

Jessica Klymchuk of Valleyview, Alta., was visiting Las Vegas with her fiancé when she was killed in Sunday’s attack. She leaves behind four children.

“Our thoughts and prayers are with the family,” the school division said.

Calla Medig of Jasper, Alta., was also killed. The 28-year-old was taking time off from her job at a west Edmonton Moxie’s restaurant to enjoy Las Vegas with her roommate.

Longtime friend Lyndsay Perham said Medig will be remembered as strong and loyal.

“She had a heart of gold,” Perham told CTV Edmonton. “She would do anything for her friends.”

It’s not the first time tragedy has struck the Medig family. Calla’s brother was killed in a car collision many years ago.

The Jasper Royal Canadian Legion Branch 31 said in a Facebook post, that “a young beautiful lady was taken from us.” The flag at legion branch has been lowered in her memory.

Tara Roe, 34, of Okotoks, Alta. was confirmed dead by her aunt, Val Rodgers. Roe’s parents were looking after her two boys while she and her husband were visiting Las Vegas with another couple.

A GoFundMe campaign was set up to raise money for the family.

A friend of Roe said she was a kind, loving and joyful person who was always open to help anyone in need.

She worked as a model and an educational assistant in the Calgary area.

Roe grew up in Brandon, Man., where family friend Loretta Hamilton said the community is heartbroken.

“Brandon is missing a beautiful star and she was going to do good things in the world so somebody will have to pick that up for her and carry it,” Hamilton told CTV Manitoba.

Two friends from Manitoba, meanwhile, were among more than 500 people wounded in the gunfire at the concert in Las Vegas on Sunday.

Jan Lambourne of Teulon, Man., was hit in the abdomen and underwent surgery. Her friend Jody Ansell of Stonewall, Man., was sent to hospital with a gunshot wound to the arm. 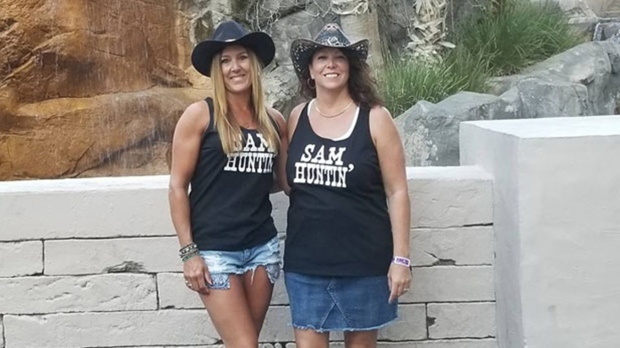 Lambourne’s husband Joseph Lambourne told CTV Winnipeg that he got a frightening call from his sister-in-law around midnight informing him that his wife had been shot.

After that, he received a text message from Jan that said: “I love you. I've been shot. I love you so much.”

“It scared the hell out of me,” he said.

Lambourne said his wife was originally listed in critical condition, but was later upgraded to stable condition.

Sheldon Mack of Victoria, B.C., was hit by multiple bullets and was placed in intensive care unit after surgery for a ruptured colon.

Mack told CTV Vancouver Island that he was standing in front of the middle of the stage with friends when he thought he heard fireworks. After that, he was shot in the gut, hip and forearm.

“I just panicked and looked for anybody who could help me and I had my friend use his belt as like a tourniquet and cut off the blood,” he said. “It all happened crazy fast. It seemed not real.”

Mack tweeted earlier Monday afternoon that there is “so much evil in this world” and thanked God “for watching over me now.”

His father Hudson Mack, a well-known B.C. broadcaster, told CTV News earlier in the day that his son had been in Las Vegas celebrating his 21st birthday.

Hudson Mack posted an update on Facebook Monday afternoon that said he and other family members had arrived in Las Vegas and had visited Sheldon.

“We were relieved to see this sight of him when we walked into the ICU, and when we saw his tweets after we landed,” he wrote.

“He helped others last night while the shooting was happening,” he went on. “His friends Liam and Cole helped him and others, and someone saved his life, dragging him to safety and getting him to an ambulance,” he went on. “Whoever you are, thank you.”

Calgary man shot in leg after helping others

Steve Arruda and his wife Elaine began running when they heard the gunfire.

After climbing a fence, Steve stayed behind to help strangers get over the fence while he told his wife to keep running. He ended up shot in the leg.

The couple recounted their story in an interview with CTV Toronto.

Elaine said she wasn’t surprised by her husband’s actions. “He’s always is helping people and putting himself second,” she said. 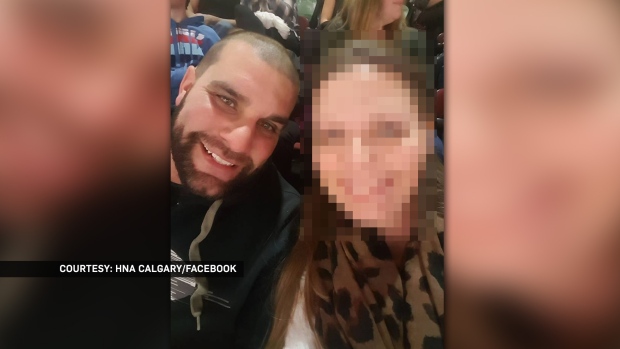 A local hockey league posted on Facebook that they wish Arruda a quick recovery.

Matt and Amanda Austin told CTV Edmonton that they ran for their lives when they heard the shots.

“I said, ‘We got to go.’ We got to get out of there,” Matt said from a terminal at Edmonton International Airport.

He was shot in the back of his right arm as the couple became tangled in the crowd near the venue’s exit. A security guard on the street rushed the pair to the hospital.

“I just felt like somebody Tasered me in the back of the arm and shot me through my bicep,” Matt said.

B.C. man shot in back of head

Braden Matekja of Lake Country, B.C., was with his girlfriend Amanda Homulos when he saw someone get shot in front of him.

“I just yelled at my girlfriend to get down and let’s run,” he told CTV Toronto from his hospital bed.

Mateka said he suddenly felt like he had been “hit with a sledgehammer or a baseball bat in the head.”

He dropped to the ground and then stood up feeling “disoriented.” He then realized there was blood “spurting” out of the back of his head from a gunshot wound.

“One guy took his shirt off and wrapped it around my head and wrapped it nice and tight while the other two helped me as we ran to the edge of cover,” he said.

Also reported injured in the attack was Ryan Sarrazin, who was raised near Spiritwood, Sask., and lives in Camrose, Alta.

Tara Killen, from Airdrie, Alberta, was shot twice and according to her husband, she is "recovering in a Las Vegas hospital from injuries sustained during the concert tragedy."

Carrie-Lynn Denis of Leoville, Sask., was shot in the foot, according to The Canadian Press.

4 Canadians among the dead in Las Vegas shooting

Canadian shot in Las Vegas after stopping to help strangers

Acts of heroism emerge from chaos of Las Vegas shooting

What is known so far about the Las Vegas shooter

Once an obscure device, 'bump stocks' are in the spotlight

Defining the Las Vegas shooting: Was it terrorism?