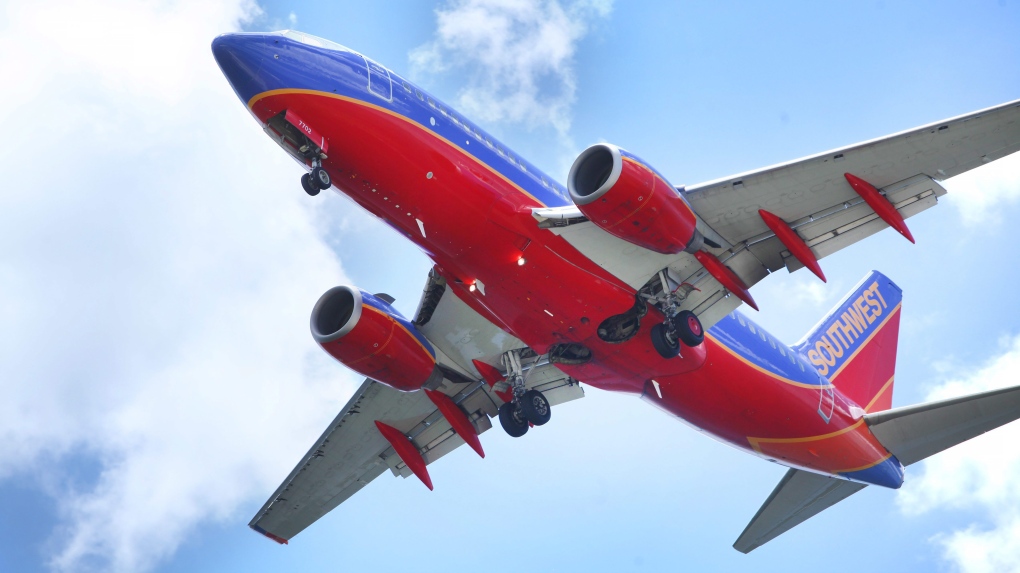 Conservative politicians and pundits, including Republican Sen. Ted Cruz of Texas, alleged the flight disruptions resulted from pilots and air traffic controllers walking off their jobs or calling in sick to protest federal vaccination requirements.

The airline, its pilots' union and the Federal Aviation Administration denied that.

Still, Twitter posts claiming airline employees were “standing up to medical tyranny” and participating in a “mass sickout” amassed thousands of shares. Vague and anonymous messages on social media speculated that Southwest was hiding the real reason for its disruptions. And anti-vaccine rallying cries such as #DoNotComply, #NoVaccineMandate and #HoldTheLine were among the 10 most popular hashtags tweeted in connection to Southwest over the weekend, according to a report from media intelligence firm Zignal Labs.

Even as flights appeared to be running closer to normal on Tuesday, the Texas-based airline remained at the center of the latest front in the vaccine mandate culture war, its challenges exploited by opponents of vaccine requirements.

Neither the company nor its pilots' union has provided evidence to back up their explanations for why nearly 2,400 flights were canceled from Saturday through Monday. Southwest has only said that bad weather and air traffic control issues in Florida on Friday triggered cascading failures in which planes and pilots were trapped out of position for their next flight.

“When you get behind, it just takes several days to catch up,” CEO Gary Kelly said Tuesday on CNBC. “We were significantly set behind on Friday.”

Southwest struggled all summer with delays and cancellations. A senior executive admitted to employees Sunday that the airline is still understaffed and might need to reduce flights in November and December.

Despite repeated requests, the company and the union have declined to say how many employees missed work during the crisis. They have said that absentee rates were similar to those over a typical summer weekend, but they have not put out numbers to support that argument. It is also unclear how many Southwest pilots are unvaccinated.

Meanwhile, speculation from prominent conservative politicians and pundits has flooded into the void. Many shared the unsubstantiated theory, but few provided details, facts or examples of employees walking off the job to protest the vaccine.

The Republican senator wrote in another tweet Monday that he met last week with leaders of pilot unions who “expressed deep concern over the vaccine mandates.” A spokeswoman for Southwest pilots said no one at the union had talked to Cruz. A spokesperson for Cruz did not respond to emailed questions from The Associated Press about whether the Republican senator had any firsthand knowledge of pilots or air traffic controllers skipping work.

Vague, familiar-looking “friend of a friend” stories are a dangerous form of misinformation because they “feel like insider information being shared by individuals directly involved in the action,” according to Rachel Moran, a misinformation scholar at the University of Washington.

Similar unsupported claims circulated online in August, when social media users falsely claimed that flight delays and cancellations out of Fort Lauderdale-Hollywood International Airport were the result of vaccine mandates. In September, false internet rumors swirled that 40% of employees at defense contractor General Dynamics had declined the vaccine and threatened to quit.

Some Twitter users connected Southwest's flight problems to news that on Friday the Southwest Airlines Pilots Association had asked a federal judge in Dallas to block the airline's vaccine mandate. The union said under federal labor law, Southwest must bargain with the union before making changes affecting working conditions. The judge has not ruled yet.

Asked on Tuesday to respond to claims that vaccine mandates have reduced the workforce and contributed to supply-chain disruptions, White House press secretary Jen Psaki took a jab at Cruz - sarcastically labeling him a “world-renowned business, travel and health expert” - before defending Biden's policy.

“I know there was a little hubbub over the course of the last few days about Southwest Airlines,” Psaki said. “We now know that some of those claims were absolutely false and actually the issues were completely unrelated to vaccine mandates.”

Biden's order, which is still being finalized, would require employers with 100 or more workers to get vaccinated or tested weekly for COVID-19. Airlines, however, are government contractors because they perform work such as emergency flights for the Defense Department that carried Afghanistan refugees to the U.S. in August. That makes airlines subject to a tougher standard under the Biden order: mandatory vaccinations with no opt-out for getting tested.

Following the lead of other airlines, Southwest told employees last week that it would require them to be vaccinated by Dec. 8.

While some staff at airlines and other large companies have spoken out against vaccine requirements, comments on social media have created an exaggerated sense of the dissent, according to Moran, the misinformation scholar at the University of Washington.

“In reality, it's quite a small number of people who are protesting employment-based mandates for the vaccine,” Moran said. “People are more vulnerable to misinformation in times of crisis, and these labor shortages and supply-chain delays either create a real sense of crisis or are manipulated by misinformation spreaders to make it appear like we are heading towards crisis.”

The gang that kidnapped a group of 17 American and Canadian missionaries in Haiti has asked for US$1 million each for their release, a top Haitian official told CNN Tuesday. The 16 American citizens and one Canadian were kidnapped by the powerful '400 Mawozo' gang on Saturday.

Rechie Valdez has turned self-described 'side hustles' into full-time focuses as an entrepreneur, and is now taking on a new challenge: Liberal MP for Mississauga-Streetsville. In taking her seat in the House of Commons next month as one of 50 rookies elected, she'll also be making history as Canada's first federally-elected Filipina MP.

A new survey suggests that the rising cost of living and the added burden of COVID-19 are forcing Canadians further into debt.

'I'm heartbroken by this': Celine Dion delays opening of Las Vegas shows due to medical reasons

Just weeks before Céline Dion was set to return to the stage in Las Vegas, the Quebec superstar is delaying her show due to "unforeseen medical symptoms," her team said in a news release.