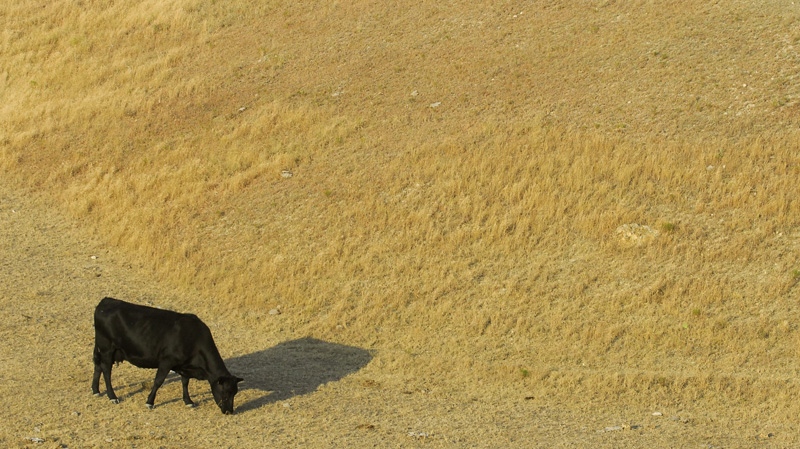 A cow grazes in a Kansas pasture in this July 2012 file photo. (The Hays Daily News / Steven Hausler)

WICHITA, Kan. -- Kansas cattleman Ken Grecian sold 20 pairs of cows and calves a few weeks after drought had sucked his pastures dry and no rain was in the forecast. He sold 20 more pairs Friday.

Grecian spent years meticulously breeding his cows to improve the genetics in each generation, but with Kansas in one of the worst droughts seen in decades, he's struggling to find enough grazing to feed 300 cows, plus their calves. He hopes to get by with selling only a quarter of his herd, but there are no guarantees with the drought expected to linger through October.

Other cattlemen throughout the middle and western part of the U.S. also are selling animals they can't graze or afford to buy feed for. Beef from the animals now flooding livestock auctions will start showing up in grocery stores in November and December, temporarily driving down meat prices. But then prices are expected to rise sharply by January in the wake of dwindling supplies and smaller livestock herds.

The number of cattle in the U.S. has been dropping for years, but the pace picked up last year when ranchers in Texas, the nation's top beef producer, sold a massive number of animals amid a severe drought in the Southwest. Farmers in Nebraska, Montana, Wyoming and the Dakotas bought some of those cows, however, so nationwide, the loss wasn't as great as it could have been. This year, virtually no one is expanding herds.

"The drought was really bad in the Southern Plains last year, but the cattle industry was able nationally to absorb it because it wasn't bad everywhere. This one is much more along the lines of bad everywhere, so the market implications are a lot larger and a lot more players in the industry are impacted by this," said Glynn Tonsor, an agriculture economics professor at Kansas State University.

The U.S. Department of Agriculture reported Friday that the nation's cattle inventory was the smallest since the agency began a July count in 1973. It estimates the size of the nation's herd each January and July. The U.S. had 97.8 million head as of July 1, 2 per cent less than a year ago.

It is likely to take the beef industry years to recover. Cows have a nine-month gestation period, and it can take up to two years after calves are born for them to grow big enough for slaughter. The time needed to repair drought-damaged pastures will only extend that timetable because ranchers must have grass for grazing before they can add animals.

Grecian, 62, who farms northwest of Hays, said a local drought forced him to sell nearly 30 per cent of his cattle in 2003. It took six years for him to rebuild once the drought ended. He did it by holding onto female calves and not selling them.

It's possible, he said, to rebuild faster by buying animals, but that can be costly when few young, female cows are available, and farmers might not get the animals they want.

"It is our life and we invest a lot of emotion and energy and money into developing a cow herd that is genetically what we want," Grecian said. "When we are forced to liquidate, it is not an easy thing to do. It is pretty heart-wrenching sometimes, but is part of the business."

Cattle have been streaming into auction yards across the country in recent weeks as grazing land burns up in the sun, ponds and streams evaporate and prices for feed corn rise. In Oklahoma City, the number of cattle going to auction quadrupled in one week earlier this month, and in Kearney, Neb., it increased three-fold.

In Texas, some 36,000 cattle were brought to auctions last week - nearly triple the 13,400 animals sold just a couple of weeks earlier and approaching the 43,600 head sold at the same time during last summer's brutal drought, according to the USDA.

Calf prices are falling with so many animals on the market. A 600-pound calf now fetches $120 less than it brought in just a couple of months ago. Prices for feeder cattle, which are typically fed grass before going to feedlots to be fattened on corn, have collapsed as corn prices have gone up. Feedlots are spending about $200 more per cow on corn than they were just months ago.

Beef prices were already falling after rising 10 per cent last year amid the drought in the Southwest. They peaked at an average of $5.09 per pound in January, and then came down to about $4.93 per pound in June. They are expected to increase again, but it's not clear by how much. The USDA had predicted a 2.5 to 3.5 per cent increase in beef prices for the year, but that was before the drought spread and cattle selloffs mounted.

Jon Ferguson, 63, has weaned calves earlier and sold some cows about a month earlier than usual to save pasture on his ranch near Kensington, Kan. He has about 450 pairs of cows and calves and nearly 1,200 other calves that he buys each year to fatten on grass before shipping them to a feedlot.

He shipped a third of his cattle from Kansas to Colorado to graze during a drought in the summer of 1989. He's not sure whether that option will be available this year, or whether he should just liquidate and cut his costs now.

"If you can figure out a way to hang on to them at a reasonable cost until the drought is over, it typically pays you pretty well," Ferguson said. But, he added, "If this thing persists through the summer, and we see these kinds of temperatures with no significant moisture relief, we will be in trouble by fall."