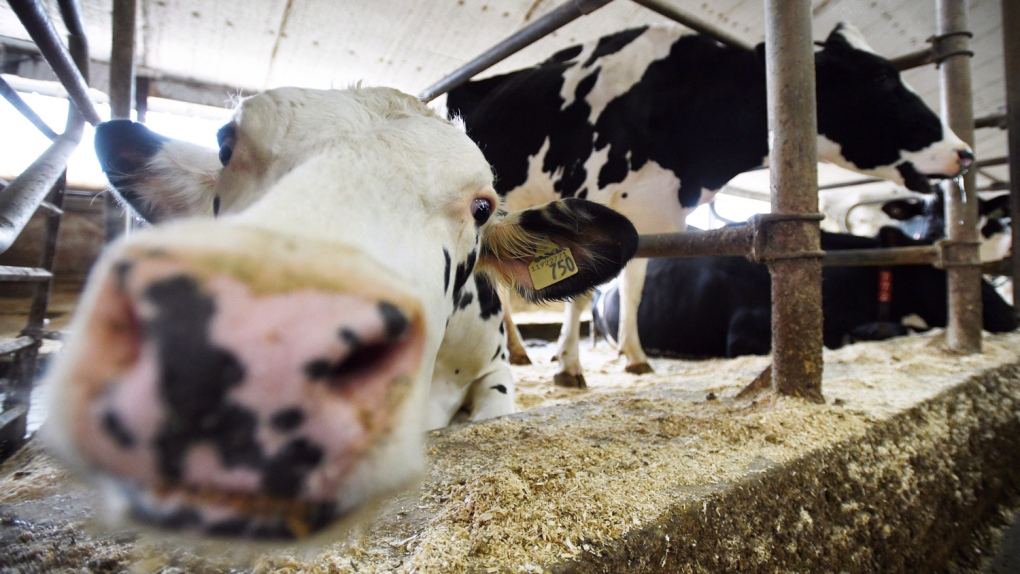 Dairy cows are shown in a barn on a farm in eastern Ontario on Wednesday, April 19, 2017. THE CANADIAN PRESS/Sean Kilpatrick

OTTAWA -- A leading U.S. farmers' organization says it wants the new North American trade agreement renegotiated to fix a major flaw -- one that has nothing do with Canada's much-attacked supply-management system for dairy.

The National Farmers Union says the new deal's extended patent protection for new pharmaceuticals must be reduced so that less expensive generic versions of new drugs can be available to consumers sooner.

Opening up access to Canada's supply-managed dairy market was a major U.S. priority during the renegotiation of the North American Free Trade Agreement, which was punctuated by fierce criticism from U.S. President Donald Trump that Canadian farmers were hurting their American counterparts with unfair practices.

Republicans are pushing hard on Capitol Hill this week, urging the Democrats to introduce a ratification bill for the new United States-Mexico-Canada Agreement in the House of Representatives, the lower house of U.S. Congress the Democratic party controls.

Before doing that, the Democrats want changes to the USMCA, including the new intellectual-property protections for pharmaceuticals as well as stronger labour and environment provisions, and that push is also supported by the farmers' union.

Other farm groups, as well as politicians from milk-producing states, are also pushing the Democrats to move forward with USMCA.

Neither Canada nor the U.S. has ratified the new deal with votes in Parliament or Congress. Congress returned from its summer recess this week and the Canadian federal election campaign begins officially on Wednesday, meaning Parliament can't sit until some time after Oct. 21.

The Liberal government has said it won't renegotiate the new deal, considering it closed, but Edelberg echoed the Democratic line that changes will have to be made, especially in the patent-protection provisions for medicines, before the farmers' group is willing to endorse the new deal.

"Without access to quality health care, and prescription drugs is a huge part of that, it's a tough sell for farmers," Edelberg said in an interview Tuesday.

Canadian dairy farmers also don't like the deal, known north of the border as the Canada-United States-Mexico Agreement, and are critical of the increased access that it allows for American products.

"If ratified as is, CUSMA will concede an additional four per cent of our dairy production for U.S. dairy farmers to supply the Canadian market while limiting our ability to export our own dairy products," Jacques Lefebvre, the chief executive of Dairy Farmers of Canada, said in a statement to The Canadian Press.

"In addition, the agreement includes the elimination of competitive dairy classes. The federal government has said that it is committed to having a thriving dairy industry, yet CUSMA creates significant challenges for our sector."

Edelberg said the increased U.S. access to the Canadian market is essentially negligible and won't solve the problems that farmers in her country now face.

"The only thing that we're going to be doing by increasing our dairy exports to Canada is ruining your system of supply management ... and us messing up your dairy industry isn't helpful for the little bit it's going to help ours."

Quite simply, U.S. farmers produce more milk than they can sell, and unless they can find a way to drive up more demand domestically, the number of smaller family farms will continue to shrink while production is consolidated among larger factory farms, said Edelberg.

"I don't think there's going to be enough dairy traded between our two countries to save the U.S. dairy industry. We make and produce way too much milk in this country to be able to rely on a country the size of Canada to fix our dairy program."

Farmers are a key constituency for Trump and persuading the Democrats to introduce a USMCA ratification bill is important for his own fortunes as he seeks re-election next year. It would give him a win on trade as he pursues a globally disruptive trade war with China.

Trump's senior economic adviser, Peter Navarro, said Tuesday he's "100-per-cent" confident the House of Representatives will ratify the new deal by the end of the year, and that its Speaker Nancy Pelosi, the country's most senior Democrat, will do the right thing and introduce the bill.

"We hope to get this done in the next 30 to 60 days and today is going to be an important day talking to the people of America so that they can encourage their representatives to do the people's business when they get back to Washington," Navarro said on MSNBC's "Squawk Box."