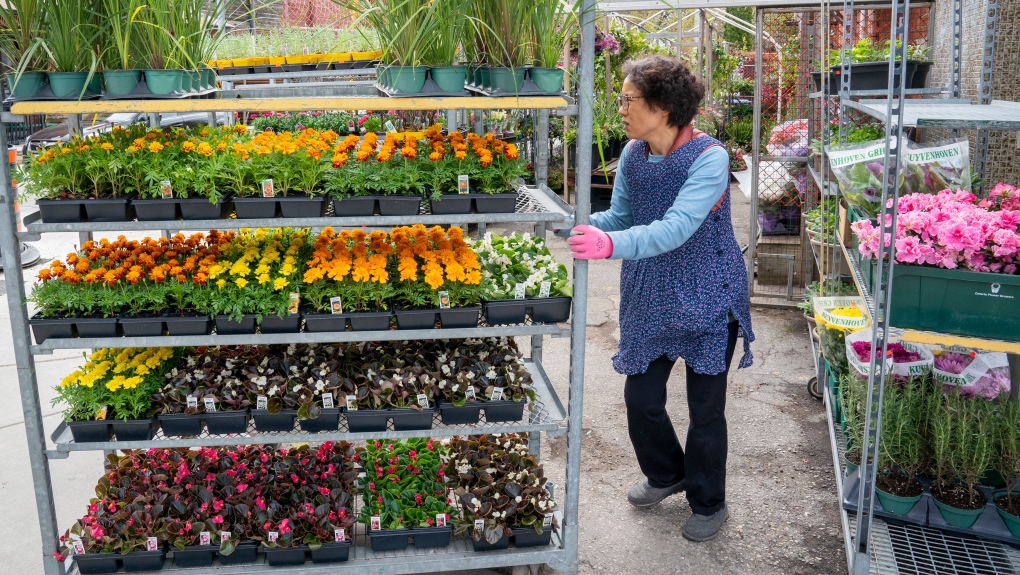 A woman pushes a cart of flowers as she sets up a neighbourhood garden centre in Toronto on Monday, May 4, 2020. THE CANADIAN PRESS/Frank Gunn

OTTAWA -- Retail sales rose 3.6 per cent to $57.6 billion in March as COVID-19 restrictions relaxed in some parts of the country, but Statistics Canada said a preliminary estimate pointed to a drop in April as the rules were tightened again.

The agency said Friday a preliminary estimate suggests retail sales in April fell 5.1 per cent as governments brought back restrictions to slow the spread of the pandemic.

It noted that the unofficial estimate would be revised as it received more responses from the companies it surveys.

TD Bank economist Ksenia Bushmeneva said preliminary estimates, combined with spending and mobility data, suggest that spending will be weak in April and May.

"The picture may brighten in June: with caseloads declining and vaccinations rates ramping up significantly across the country, many provinces are slated to start easing restrictions," Bushmeneva wrote in a report.

CIBC senior economist Royce Mendes said after strong GDP growth in the first quarter, the economy is likely set to prove weaker than the Bank of Canada expects in the second quarter.

"But, with virus cases falling and some provinces now planning a reopening strategy, there is good news to come," Mendes wrote.

Retail sales in March were up in 10 of the 11 subsectors tracked by Statistics Canada.

The agency said the March increase overall was led by a 19.8 per cent increase at building material and garden equipment and supply stores.

Meanwhile, sales at clothing and clothing accessories stores were up 23.6 per cent to reach their highest level since the start of the pandemic.

Sales at food and beverage stores fell 1.3 per cent, on a 1.6 per cent drop at supermarkets and other grocery stores as well as a 12.0 per cent drop at specialty food stores. Sales at beer, wine and liquor stores rose 3.1 per cent.

In volume terms, retail sales rose 3.2 per cent in March.

This report by The Canadian Press was first published May 21, 2021