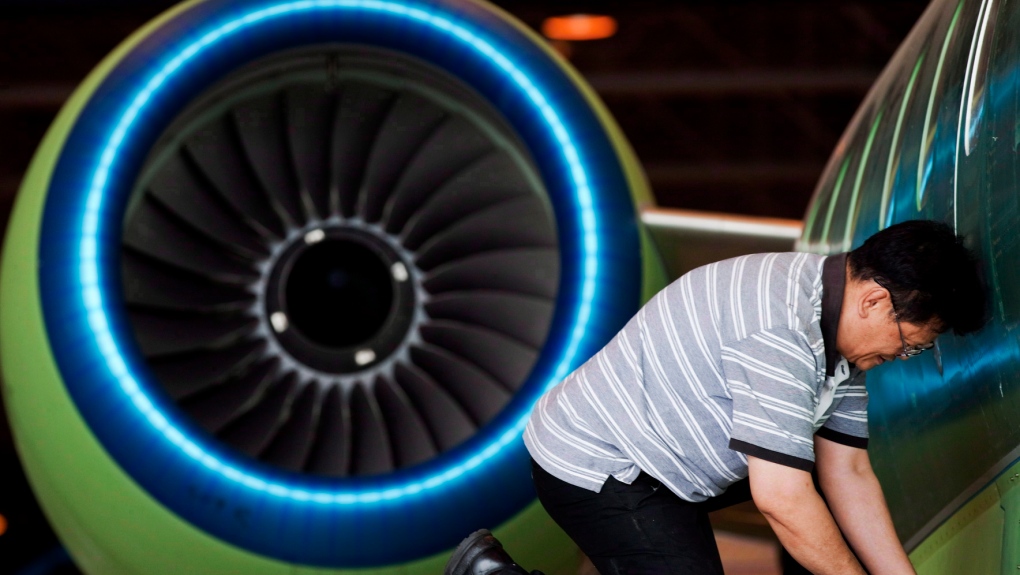 The union representing Bombardier and De Havilland aerospace workers in Toronto are threatening a strike this week unless negotiations can guarantee Dash 8 turboprop jobs remain in the GTA.

After a three-week cooling-off period, separate talks were set to resume Sunday ahead of a Tuesday strike deadline.

Unifor national president Jerry Dias said the negotiations are about "protecting the kind of highly skilled advanced manufacturing jobs we need now more than ever."

About 2,200 members of Unifor Local 112 and Local 673 at Toronto's Downsview plant manufacture Bombardier's Global business aircraft and until recently the Dash 8 turboprops for De Havilland Canada.

The labour negotiations come at a time when the aviation sector is taking baby steps to recover from government-forced shutdowns of international commercial travel because of COVID-19.

With the COVID-19 pandemic taking a bite out of aircraft sales, hundreds of aerospace employees are on layoff as production winds down on the Dash 8.

The regional aircraft is used by airlines including WestJet, Porter and Jazz.

The union wants De Havilland, whose parent company is Longview Aviation Capital Corp., to commit to making the Dash 8 somewhere in Greater Toronto when production resumes.

"When they say to me we don't have any sales on the horizon, I believe them. But the bottom line is, if they're going to build that plane our members are building it," said Dias, who began his career working at the Downsview plant in the 1970s.

Longview bought the turboprop program from Bombardier for $300 million in June 2019 and formed a holding company called De Havilland Aircraft of Canada Ltd.

The company announced earlier this year that it would no longer produce new Q400 aircraft at the facility beyond currently confirmed orders. De Havilland indicated two years ago that work will end at Downsview once lease agreements for the land expire.

Dias fears De Havilland plans to move production to its facilities in Alberta.

He said the company refused to bargain any sort of scope clauses that would limit production to somewhere in the GTA, including Pearson International Airport where Bombardier has broken ground on a new facility for its Global business jets.

"Their silence on the matter is very troublesome," he said in an interview. "The bottom line is we've got a lot of people have worked there for a lot of years and have worked on this program and they deserve the right to continue to build the program."

De Havilland said it believes the Dash 8 has a future despite the challenges faced by the industry because of the pandemic.

"However, the company cannot and will not rush to a decision on future production location, nor negotiate a site plan in public," it said in an email.

"We are eager to work in partnership with the union as we chart a sustainable long-term future for aircraft manufacturing. But that future relies on a concerted effort to transform the business to the circumstances we are facing."

De Havilland said the union must agree to "a fair and reasonable" collective agreement that is fundamental to the company's future investment in the aircraft.

Unifor is negotiating separately with Bombardier, with the two sides battling over a variety of items including wages and working conditions.

However, Dias said a strike would affect operations of both companies because of their shared driveway, entrance and exit.

"The bottom line is, if we have a strike with either of the two, the entire facilities are down," he said, adding that there's a lot of solidarity among members because many worked side-by-side for 25 to 30 years.

Unifor negotiated a contract with Bombardier in 2018 that expired in June. They committed not to sell the Dash 8 program and then did just that.

"So the mess we're in now by and large they created. So if they end up being caught in the crossfire, well then too bad for them. They created a mess in the first place." Dias said.

Bombardier said talks are progressing "constructively" after both sides agreed to a brief pause but the company declined to comment on "hypothetical scenarios."

"Bombardier negotiations with Downsview employees have a history of positive outcomes -- we've concluded agreements for nearly two decades,' it said in a statement.

"Right now, Bombardier is focused on reaching an equitable agreement that helps preserve jobs and positions Bombardier and Unifor members for success as the business aviation industry rebounds."

Workers in Toronto have built Dash-series aircraft since 1946, including the Dash 8 series for more than 30 years.

The federal and Quebec governments recently announced a $700-million injection into the aerospace industry, including nearly $70 million for aircraft engine manufacturer Pratt & Whitney to develop the first sustainable hybrid-electric prototype propulsion system with various partners, including DHC and the Dash 8.

Bombardier sold Downsview, a 148-hectare tract of land that used to be a military airport, to Canadian pension manager Public Sector Pension Investment Board in June 2018 for US$635 million or net proceeds of US$550 million after costs.

Unifor wants the federal and Ontario governments to press De Havilland to maintain jobs in the province especially after approval of severing the land in Downsview was approved on the premise that jobs would be protected, said Dias.