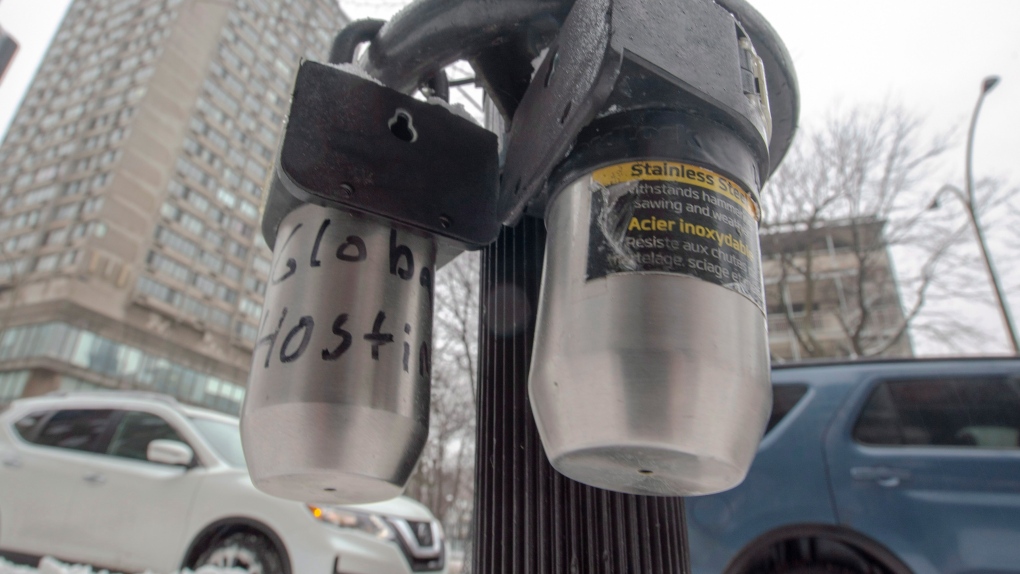 Lock boxes for keys to Airbnb units are seen attached to a parking meter post Tuesday, January 8, 2019 in Montreal. (THE CANADIAN PRESS/Ryan Remiorz)

MONTREAL -- In order to alleviate what city officials are calling a housing crisis, Montreal is enlisting citizens and municipal workers in the fight against illegal online apartment rentals. And it is calling on the provincial Revenue Department to aggressively investigate suspected offenders.

Cities across Canada have cracked down on residents using online home-sharing platforms such as Airbnb. Montreal's latest strategy is to direct its employees to remove from public property small lock boxes that contain keys allowing short-term renters to enter apartments on their own.

On Monday, Mayor Valerie Plante asked residents to use a city hotline to report any lock boxes they see attached to public property, such as parking meters and bicycle racks.

"Our teams are at work," Plante tweeted about the lock boxes. "If you see them in your neighbourhood, don't hesitate to report them."

City councillor Richard Ryan said officials suspect the boxes that have been popping up around town are aimed at evading inspectors. "Our hypothesis is that they want to stay anonymous," he said in an interview. "The fact the boxes are on the street and not on private property -- we don't know to which apartment they belong or what building."

A city spokesperson said the city has so far removed about a dozen lock boxes downtown and a few in the Plateau-Mont-Royal, but added that many others have been removed by their owners since officials publicly condemned the practice.

In 2015, the Quebec government passed a law forbidding people from using a secondary residence for short-term rentals without proper certification.

Last June, the government gave the law more teeth by transferring inspection and investigation powers from the Tourism Department to the Revenue Department. Municipal rules strictly limiting where residents can rent a secondary residence in popular Montreal neighbourhoods such as the downtown core and the Plateau went into effect last week

Ryan said Airbnb and other platforms are depriving Montrealers of places to live. "We are entering a housing crisis," he said, noting that vacancy rates across the city are below 2 per cent -- and below 1 per cent downtown and in the Plateau. He said about 70 per cent of the Airbnb offerings in Montreal -- 8,000 houses or apartments -- are located in those two neighbourhoods.

If provincial inspectors crack down on illegal rentals, Ryan thinks the Plateau and downtown can recoup up to 5,000 homes for Montrealers. But he said that can only happen if the Revenue Department uses its powers to "aggressively" pursue delinquents.

"Between the end of June and Nov. 20, 2018, 3,465 inspections have been conducted across Quebec, and 963 warnings were given," Laurier said. She added the agency is giving residents time to conform to the law before it starts imposing fines that can go up to $25,000 for individuals and up to $50,000 for companies.

Montreal is the latest Canadian city to tighten the rules around home-sharing. In 2017, both Toronto and Vancouver banned residents from listing secondary properties, among other restrictions.

Odile Lanctot, spokeswoman with a housing rights group in the Plateau, said current laws are not enough. She said Airbnb should be held accountable for listing "illegal" rentals. She wants the province to order the company to hand over data on clients so it can better investigate who is listing secondary residences on the website.

New York City passed a law that was to go into effect in February forcing Airbnb and similar sites to hand over information on clients, such as addresses, to the city. But Airbnb and another site, HomeAway, have sued, and a judge this month granted the companies a temporary injunction.

Lindsey Scully, spokesperson for Airbnb, said most Montreal renters using the site "share their residential homes a few nights each month to earn modest, supplemental income. When hosts sign up on Airbnb, they must certify that they are complying with local rules before they list their space."