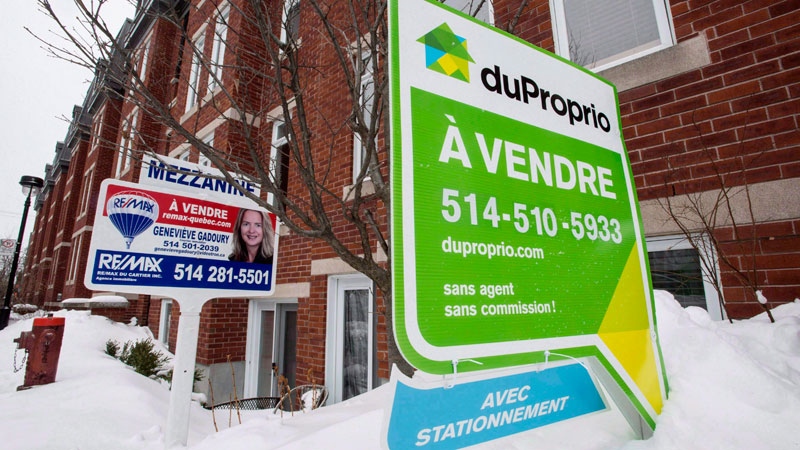 For sale signs are seen in front of a Montreal condominium on Tuesday, March 17, 2015. (Paul Chiasson / THE CANADIAN PRESS)

VANCOUVER - Montreal is emerging as a luxury real estate "hot spot," while Vancouver and Toronto sales should pick up this fall after somewhat sluggish times, according to a new report.

Sotheby's International Realty Canada's rosy outlook comes despite a slew of policy changes, including some from Ottawa and a couple provincial governments designed to cool the country's hot housing markets. However, Canada's strong economic performance will boost the market in the coming months, says the real estate sales and marketing company.

"The psychological confidence that people had in the marketplace was shaken by all of the different factors that were put in there," said Brad Henderson, CEO of Sotheby's International Realty Canada, of a recent drop in sales in properties of more than $1 million in Toronto.

In July and August, sales of condominiums and houses over $1 million in Toronto fell 27 per cent compared to the same months the year before, according to the report. Transactions of properties over $4 million in the city fell by nearly the same amount - 28 per cent.

Part of that drop came as buyers and sellers in Ontario grappled with a new 15 per cent tax on foreign buyers of properties in the Greater Golden Horseshoe Region, which includes Toronto and several nearby areas, introduced by the provincial government in late April.

Ontario followed British Columbia's footsteps in the policy. The B.C. government implemented a similar levy on foreign buyers in the Metro Vancouver area in August 2016, and the province experienced a drop in luxury property sales shortly thereafter.

In Vancouver, the report says, sales of luxury real estate over $1 million dropped 23 per cent in the first half of the year compared to 2016. But, sales increased five per cent during July and August, compared to the same months last year.

Sotheby's anticipated the Toronto market would pull back not only due to the impact of its foreign buyers' tax, but also because of a move to stricter lending rules by the federal government last year, and two recent hikes in the benchmark interest rate from the Bank of Canada.

While that tempered the psychological confidence in the Toronto market, Henderson said, it boosted people's confidence in Quebec, where the provincial government has yet to intervene.

In Montreal, sales of condominiums and homes over $1 million jumped 60 per cent year over year this July and August.

Sotheby's forecasts Montreal will "emerge as a strong leader on Canada's luxury real estate landscape this fall," according to the report.

Henderson rejects the idea that growth is primarily coming from foreign buyers who have shifted away from the newly-taxed Vancouver and Toronto markets. Though, the report cites some anecdotal evidence of "an uptick in interest from foreign buyers seeking residences."

Instead, Montreal is an attractive place to live and work, Henderson said, with the added bonus of having comparatively less expensive real estate prices.

Sotheby's also anticipates "a brisk and active" market for luxury real estate in Toronto this fall and for Vancouver to regain momentum as a strong Canadian economy is expected to boost confidence and performance in the autumn months.

In Calgary, the report says "tentative optimism is set to gain ground" as the city emerges from a recession.