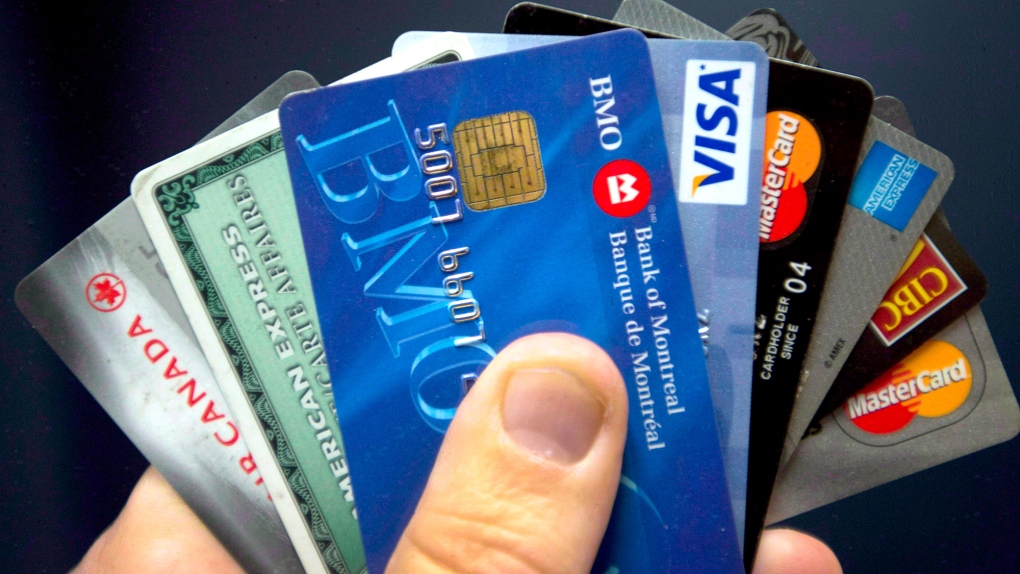 Credit and bank cards are seen in this undated file image.

OTTAWA -- The amount Canadians owe relative to their income posted its largest decline on record in the first quarter as mortgage borrowing slowed along with a cooler housing market.

Statistics Canada said Thursday household credit market debt was equal to 168.0 per cent of household disposable income in the quarter, its lowest level since the first quarter of 2016.

The ratio, which compared with 169.7 per cent in the fourth quarter of last year, recorded its largest decline since the agency started tracking the measure in 1990.

The drop means there was $1.68 in credit market debt for every dollar of household disposable income.

"While the ratio generally tends to fall in the first quarter due to seasonality, the 1.68-percentage point decline marks the biggest improvement on record," economic analyst Priscilla Thiagamoorthy of BMO Capital Markets said.

"The steeper drop to start 2018 suggests we may finally be at a turning point as the one-two punch of stricter mortgage rules and higher interest rates slow household borrowing, while income continues to climb."

The move came as disposable income increased 1.3 per cent, while credit market debt rose 0.3 per cent.

The Bank of Canada has identified household debt as a key vulnerability for the financial system, but the central bank noted that risk has lessened in recent months along with worries about the housing market.

On a seasonally adjusted basis, households borrowed $22.2 billion in the first quarter, down from $25.4 billion in the previous quarter. Statistics Canada said mortgage borrowing fell $2.0 billion to $13.7 billion, the lowest level since the second quarter of 2014.

The slowdown came as tighter lending rules and higher mortgage rates helped cool the housing market in recent months compared with its torrid pace at the start of last year.

Royal Bank senior economist Robert Hogue said with growth in both mortgage and non-mortgage debt slowing, debt metrics should continue to improve in the near term.

"Developments in the last two quarters are unlikely to change the conversation about household indebtedness in Canada entirely though they are enough to alter its tone," he wrote in a report.

Hogue noted as interest rates rise how Canadians manage their debt service costs will be important.

Statistics Canada said the seasonally adjusted household debt service ratio, measured as total obligated payments of principal and interest as a proportion of household disposable income for mortgage and non-mortgage debt, was relatively flat at 13.9 per cent.

"So far, the debt service ratio has remained stable at slightly below 14 per cent. Yet we expect that it will come under upward pressure in the period ahead," Hogue said.

"In our view, this will be a key factor restraining household spending growth this year. It will also be an element keeping the Bank of Canada cautious about raising rates."

The Bank of Canada has raised its key interest rate three times since last summer and is expected to raise the trend-setting rate again later this year.

Changes in the rate affect the prime rates set by Canada's big banks that are used for variable-rate mortgages and other floating-rate loans.